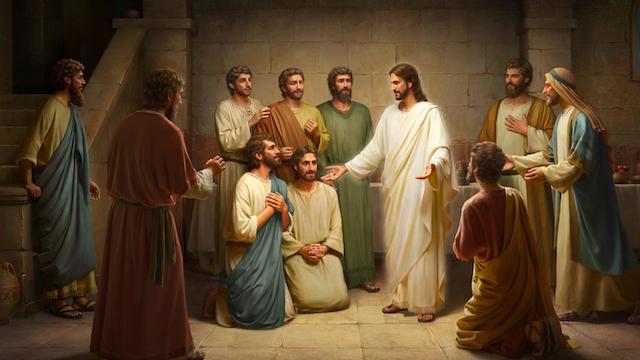 And as they went to tell his disciples, behold, Jesus met them, saying, All hail. And they came and held him by the feet, and worshipped him. - Matthew 28:9

After reading these words, I had gained some understanding. Before the Lord Jesus was resurrected, He was in the flesh. After the resurrection, He appeared to man in a spiritual body with the image of the flesh. At that time, the Lord Jesus had transcended the limitations of the flesh, and could come among His disciples and appear to them when the door was closed. Although His outward image didn’t change, He had become a spiritual body. Facing the spiritual body of the Lord Jesus, the disciples felt that it was mysterious, and there was also confusion and distance growing inside them. The Lord Jesus was clear about man’s mentality and need. So, after the resurrection, He appeared to man for forty days, and ate bread and fish and explained the scriptures to His disciples. So that man could see that He was still the same Lord Jesus, tangible with flesh and bones, and would no longer think that the resurrected Lord Jesus was a spiritual body that they couldn’t touch or approach. In addition, they could see His existence and recognize Him, with no more doubt but confirmation of His resurrection. In this way, the relationship between man and God would be restored to their relationship before the crucifixion. They would say, “The Lord has risen from dead! He is the same as before. He loves us the same way He used to. He cares about us, He doesn’t leave us, and He is still with us, still on earth.” Besides, through His resurrection and appearance to man, the Lord Jesus opened up a phase of the work in the Age of Grace, and led man to come out from the law and enter into the new age. All the followers of Him knew that He is Christ, the incarnated God, and God Himself, and their faith was thus strengthened. Later, His disciples took His resurrection as the greatest vision, and began to testify about Him, telling people the facts of His work, and to preach the gospel, which has been spread across the world today. So, the meanings of the Lord Jesus’ resurrection can be seen from above.

• Why Did the Resurrected Jesus Christ Appear to His Disciples Many Times?

• The Lord Jesus’ Words to His Disciples After His Resurrection

Today’s Gospel For there shall arise false Christs, and false prophets, and shall show great signs and wonders; so that, if it were possible, they sha…

Today’s Gospel If you then, being evil, know how to give good gifts to your children, how much more shall your Father which is in heaven give good thi…

Today’s Gospel Then Jesus said to them, Take heed and beware of the leaven of the Pharisees and of the Sadducees. – Matthew 16:6 Reflection In what co…