Prepare You the Way of the Lord – Reflection on Matthew 3:3 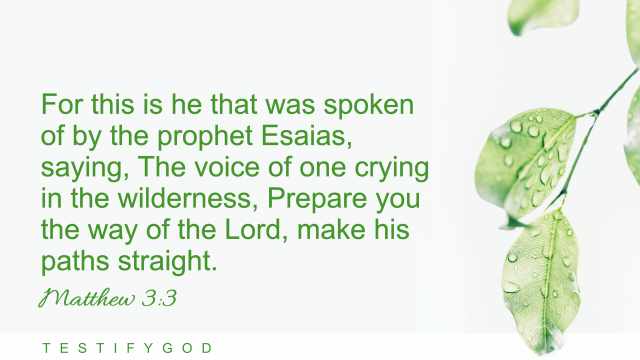 For this is he that was spoken of by the prophet Esaias, saying, The voice of one crying in the wilderness, Prepare you the way of the Lord, make his paths straight. - Matthew 3:3

John the Baptist was prepared by God before the Lord Jesus began to work. He preached in the wilderness and baptized people in the Jordan as doing his duty to pave the way for the redemptive work of the Lord Jesus. It had a substantive difference from God’s own work. God’s word says: “John did only the work of the beginning; more of the new work was done by Jesus. John did new work as well, but he was not the one who ushered in a new age. … Though John also said, ‘Repent you: for the kingdom of heaven is at hand,’ and preached too the gospel of the kingdom of heaven, his work was not in-depth and constituted merely a beginning. In contrast, Jesus ushered in a new age and brought the old to an end, but He also fulfilled the law of the Old Testament. The work He did was greater than that of John, and He came to redeem all mankind—He did that stage of work. John simply prepared the way. Though his work was great, his words many, and those disciples who followed him numerous, his work did no more than bring to man a new beginning. Never did man receive from him life, the way, or deeper truths, and neither did they gain through him an understanding of the will of God. John was a great prophet (Elijah) who pioneered new ground for Jesus’ work and prepared the chosen; he was the forerunner for the Age of Grace. Such matters cannot be discerned simply by observing their normal human appearances. Especially, John also did quite great work; moreover, he was born by the promise of the Holy Spirit, and his work was upheld by the Holy Spirit. As such, distinguishing between their respective identities can be done only through their work, for a man’s outward appearance is not telling of his substance, and man is unable to ascertain the true testimony of the Holy Spirit. The work done by John and that done by Jesus were not alike and of different natures. It is this that should determine whether or not he is God. The work of Jesus was to begin, continue, conclude, and accomplish. Each of these steps was carried out by Jesus, whereas the work of John was no more than that of a beginning. In the beginning, Jesus spread the gospel and preached the way of repentance, then went on to baptize man, heal sickness, and cast out demons. In the end, He redeemed mankind from sin and completed His work for the entire age. He preached to man and spread the gospel of the kingdom of heaven in all places. This was the same with John, with the difference being that Jesus ushered in a new age and brought the Age of Grace to man. From His mouth came the word on what man should practice and the way that man should follow in the Age of Grace, and in the end, He finished the work of redemption. Such work could never be carried out by John. And so, it was Jesus who did the work of God Himself, and it is He who is God Himself and directly represents God.” God’s word reveals the mystery which every Christian should equip and enter.

• Why Must God Incarnate Himself to Work and Save Man

The Lord Jesus is the Christ – Reflection on Matthew 16:16

Today’s Gospel And Simon Peter answered and said, You are the Christ, the Son of the living God. – Matthew 16:16 Reflection When Peter followed Jesus, he found Jesus’ words were the truth and His work was beyond the reach of man. In addition, he was enlightened by the Holy Spirit, so he could recognize […]

Stop Being Angry and Avoid Strife – Reflection on Proverbs 15:18

Proverbs 15:18 "A wrathful man stirs up strife: but he that is slow to anger appeases strife." Reflection This verse warns us not to flare up easily when we face anything goes against our wishes, because a wrathful man easily stirs up strife. Matthew 18:22 recorded Jesus’ words to Peter, “Jesus said to him, I […]

Exceeding the Righteousness of the Pharisees – Reflection on Matthew 5:20

Matthew 5:20 "For I say to you, That except your righteousness shall exceed the righteousness of the scribes and Pharisees, you shall in no case enter into the kingdom of heaven." Reflection "In the Age of Law, the Pharisees were proficient in the law of Moses, and kept all the rituals of the law and […]