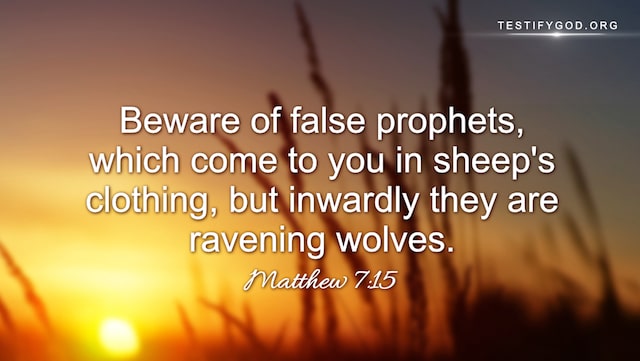 "Beware of false prophets, which come to you in sheep’s clothing, but inwardly they are ravening wolves."

In this verse, the Lord Jesus taught us to learn to discern people, not from their exterior, but from their substance. Some people externally serve the Lord and preach the Bible to others all day, but they never act according to the word of God, but deliberately oppose God. Such people do not genuinely believe in God. This makes me think of hypocritical Pharisees: They purposely prayed in the synagogue and on the street corners; when they fasted, they’d purposely have a sad expression on their faces to let people know they were fasting; they purposely donated on the street, making sure that other people saw them do it; they even followed many of the traditional rules such as, “Do not eat unless you’ve washed your hands thoroughly,” etc. From the outside, they were very devout. However, when the Lord Jesus came to work, in order to save their own positions, they flagrantly made up lies and bore false witness to condemn and resist the Lord Jesus. In the end, they even colluded with the prefect to crucify the Lord Jesus. This shows that they were ravening wolves and had the essence of hating the truth. Therefore, we must diecern people according to the word of God, and observe whether this person accepts and loves the truth, instead of just looking at his appearance.

• How Can We Discern False Christs? 3 Keys You Need to Know

• Having Learned to Discern False Christs, I Welcomed the Lord

Commentaries on Matthew
Previous The Mystery of God's New Name – Reflection on Revelation 3:12
Next Normal Relationship With God – Gospel Reflection on John 15:5

Do you know the significance of the Lord Jesus’ parable in Matthew 18:12–14? How did God show His love through His words? As I read these words of the Lord and pondered the parable He spoke, I deeply appreciated God’s sincerity in saving us mankind.

Today’s Gospel And from the days of John the Baptist until now the kingdom of heaven suffers violence, and the violent take it by force. - Matthew 11:…

Matthew 7:21 "Not every one that said to me, Lord, Lord, shall enter into the kingdom of heaven; but he that does the will of my Father which is in he…

Today’s Gospel And they immediately left the ship and their father, and followed Him. - Matthew 4:22 Reflection Mentioned in the verse, “left”, we kno…