“Super Blood Wolf Moon” Is to Appear—Jewish Rabbi: The End of the World Is Near 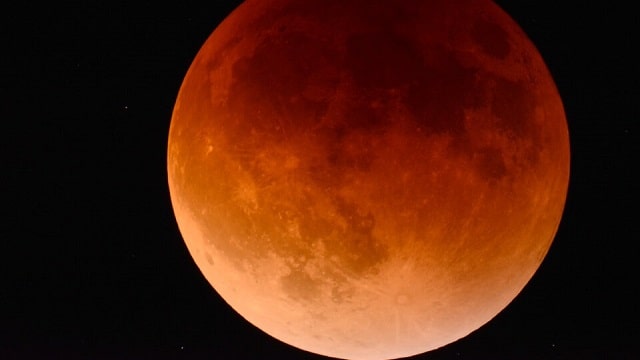 Image from the Internet

“Super Blood Wolf Moon” combines the three astronomical phenomena of “Super Moon,” “Blood Moon,” and “Wolf Moon.” “Super Moon” refers to when the moon reaches a perigee, and when it is full, it looks 14% larger and 30% brighter than usual.

“Blood Moon” is a total lunar eclipse. When the earth, the sun, and the moon line up in a straight line, and the red light in the solar spectrum passes through the earth’s atmosphere and refracts and shines on the moon, the moon will emit an orange-red light.

What does “Wolf Moon” refer to? It refers to the first full moon in January. It is said that a wolf’s voice is particularly loud during this time, and it is also the time when they are the most hungry.

Brian Murphy, a professor at Butler University and director of the Holcomb Observatory & Planetarium, said that at around 9:36 p.m. EST on January 20, you would see a “little notch is sort of taken out of the moon.” At 10:33 p.m., it will move into a partial eclipse. Then it will move into a full eclipse at 11:41 p.m. At 12:12 a.m. the next day, it will move into a maximum eclipse, and the total eclipse will end at 12:43 a.m.

According to Israeli media, the “Super Blood Wolf Moon” will just so happen to fall on the Jewish festival—Tu BiShvat, also known as “New Year of the Trees,” one of the four traditional New Years in the Jewish customs, occurring on the 15th day of Hebrew month, Shevat.

The media also quoted the classics of Judaism, saying that the eclipse is a bad omen for all countries. As for the lunar eclipse, if the moon turns red during the lunar eclipse, like the “blood moon” that will happen this month, this indicates that there will be a world war.

Regarding this rare astronomical phenomenon, Jewish rabbi Mordechai Genut said that the eclipse happening in the month of Shevat shows that the disasters of the world will get greater, and punishments from Heaven will appear more and more everywhere, meaning the end of all things is near.

Genut pointed out that earthquakes and volcanic eruptions will increase significantly, even more than last year. Just like the lunar eclipse conflicts with the sun and the moon in order to dominate the sky, there will be similar conflicts on Earth. Some countries that look strong now will collapse, and some countries will prosper.

• 7 Bible Prophecies About the Lord Jesus’ Return Have Fulfilled

• What You Must Know to Welcome the Lord Jesus: How Will Jesus Return?

How should we treat the prophecies of the Lord’s second coming? How should we face the Lord if His return is not what we expect and imagine?

Bible Prophecies About God’s Judgment Work in the Last Days “For the Father judges no man, but has committed all judgment to the Son” (Jhn 5:22).

When it comes to God’s judgement in the last days, we are full of imagination about it, but no one can explain it clearly. Many people have such quest…

Seven bible prophecies about Lord Jesus' return have fulfilled, if we don't seek or investigate, we will miss the chance to welcome the Lord!