One Sunday morning, Fang Xin’s nephew, Ming Ming, came to her house to draw with her daughter, Ling Ling. Fang Xin kindly touched his head and asked, “Ming Ming, what do you want to draw today?” Ming Ming leaned towards Fang Xin and said, “Auntie, I want to draw mountains, rivers, trees, birds, the sun, clouds, land and people.” Hearing what Ming Ming said, Ling Ling happily clapped her hands and said: “Me too, let’s draw it together!” 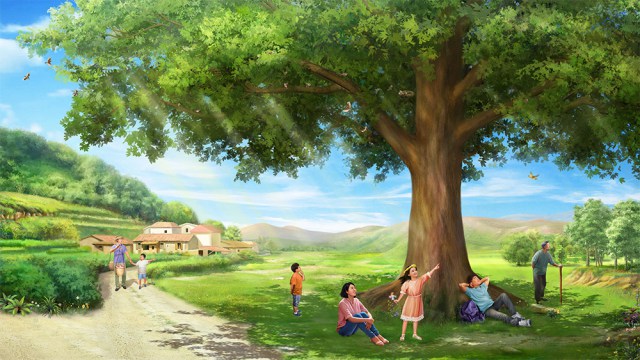 Then, Ming Ming picked up a pencil and started to draw trees, the sun, people, and birds. After finishing drawing trees, the sun and people, without thinking, he drew a bird by the river. Ling Ling thought that was wrong, but Ming Ming insisted he was right. Seeing the children were going to argue again, Fang Xin said: “Come on, let’s read God’s words and see the interconnected relationships and interdependence of all things created by God, and then all of you will know where the suitable place to draw the bird is.” Fang Xin opened up God’s words and read: “A ray of sunlight shone down on the tree and the trunk shook. The tree reached out its branches wide and drew deeply from the light. The earth below breathed in rhythm with the tree, and the earth felt renewed, and just then, a fresh breeze blew among the branches, and the tree trembled in delight, bursting with energy. And thus, the tree and the sunlight depend on one another …

“People sat in the cool shade of the tree and they basked in the brisk, fragrant air. The air cleansed their hearts and lungs, and it cleansed the blood within. The people no longer felt weary or burdened. And thus, the people and the tree depend on one another …

“A flock of songbirds chirped as they alighted on the branches of the tree. Perhaps they were evading some foe, or they were breeding and raising their young, or maybe they were just taking a short rest. And thus, the birds and the tree depend on one another …” (“God Himself, the Unique VII”). After Fang Xin finished reading God’s words, she asked: “After listening to the story God tells us, do you know where to draw the bird? The bird should fly to the tree, because the tree is its house, and the bird can’t leave the tree. The Creator arranges the home for the bird, and makes the bird and the tree depend on one another.” Ming Ming clapped his hands and said happily: “When I played with my friends under the tree, we saw some birds on the tree, and there were also many bird nests. We also heard birds chirping.” Ling Ling asked Fang Xin in surprise: “Mom, God’s word is so amazing. You can even find the answers to this type of questions. Our textbook does not tell us these things. The book of God’s words is truly an amazing book!”

As Fang Xin told the children about God’s amazing creation, the children finished their drawing. Then they finished up the coloring with different kinds of pencils. Placing a complete drawing on the table, they all enjoyed it happily. Ming Ming smiled and said: “Auntie, this drawing is so beautiful. You see how happy the people in the drawing living in this environment!” Ling Ling clasped her hands together, looked up to the sky, and loudly praised: “God is so almighty that He creates all these harmonious and wonderful things, and makes us live among them. We are so blessed!” Fang Xin nodded happily. Ming Ming held Ling Ling’s hand happily while jumping, and said: “Ling Ling, next Sunday I still want to come and listen to God’s story.” Ling Ling agreed happily, smiling and jumping with Ming Ming.

Seeing the children are able to learn something from the drawing as they listen to the story, Fang Xin praised God for His guidance from her bottom of heart. Then she said: “Children, let’s read another paragraph of God’s words, and see how God protects our homeland so that we can have an amazing environment to live in.” The children agreed happily. Sitting on the couch, Fang Xin flipped open God’s words, and read: “Do all the examples that exist in this image come from God? (Yes.) As they come from God, God knows the value and significance of these several examples existing together on the earth. When God created all things, He had a plan for each item, and each thing He created shows His intentions and He imbues life in them. He created the living environment for mankind, which is discussed in the story we just heard. It discussed the interdependence the seed and the earth have; the earth nourishes the seed and the seed is bound to the earth. The relationship between these two was predetermined by God from the very beginning, right? (Yes.) The tree, the sunlight, the songbirds, and man in this image, are they an example of the living environment that God created for mankind? (Yes.) First, can the tree leave the earth? (No.) Can the tree be without sunlight? (No.) Then what was God’s purpose for creating the tree, can we say that it was just for the earth? Can we say that it was just for the songbirds? Can we say that it was just for the people? (No.) What is the relationship between them? The relationship between them is one of interdependence wherein they cannot be separated. The earth, the tree, the sunlight, the songbirds, and the people rely on one another for existence and they nurture one another. The tree protects the earth while the earth nurtures the tree; the sunlight provides for the tree, while the tree creates fresh air from the sunlight and helps soothe the earth from the heat of the sunlight. Who benefits from this in the end? Mankind benefits from this, right? (Yes.) And this is one of the principles behind why God made the living environment for mankind and one of the primary purposes for it. Even though this is a simple picture, we can see God’s wisdom and His intentions. Mankind cannot live without the earth, or without trees, or without the songbirds and sunlight, right? Even though it was a story, it is a microcosm of God’s creation of the universe and His bestowal of the living environment upon man.

After reading God’s words, Fang Xin said to them: “Children, all of God’s creation contains God’s love and care towards us, like mountain, tiny stream, trees, birds, sunlight, land and so on. All of these are God’s meticulous arrangements. For example, a seed needs to grow on soil, and it needs sunlight to grow into a big tree. At the same time, big trees protect the soil from being washed away by rain; on the other hand, big trees provide shelter for birds and humans. We live under the trees, breathe in fresh air, and feel relaxed. All of these are all prepared for our survival by God so that mankind and all things can depend on one another. We can’t leave any of them, or we will be in danger, because God’s creation provides protection to us. They are all for us to live safely. All things are from God’s intelligence and arrangement, so we should praise and follow God. We can’t disappoint God’s earnest intentions, but cherish and protect the environment, and all things that God creates. Now people mine on mountain, cut down trees in order to make more money. They have destroyed God’s creation. In the end what they have done will bring great disasters to humans. Therefore, in the future, we should do according to God’s words, cherishing and protecting God’s creation, shall we?” “Yes!” The children said in unison …

No matter what kind of laws of survival for all things, they are all carefully arranged by God for our humans’ existence. We can feel God’s miraculous deeds and His immeasurable love for man from all things created by God.

The Importance of Church Life to a Christian

Does Your Service Come With a “Price Tag”?

How to Draw Near to God Anytime: 3 Useful Principles of Practice

4 Tips on How to Have a Close Relationship With God
How can we have a normal relationship with God? Here are 4 tips every Christian need to know. Firstly, we should frequently have real prayer and association with God. ...

Church Life: How to Enter Into True Prayer
Praying is an important part of everyday life for Christians. But do you know why Christians need to pray and how to enter into true prayer? Let us look for the answers together in Sister Kexin’s experiences …