Understand the Trinity and the Relationship Between the Father, the Son, and the Holy Spirit

Although many brothers and sisters in the Lord verbally acknowledge that there is only one God, who is unique, yet whom they pray to is the Trinity, that is, the God of three persons—the Father, the Son and the Holy Spirit. In the imagination of man, the Father is the great and powerful Jehovah God in heaven who “wears the golden crown on His head, His clothing is pure white”; the Son is the Lord Jesus who could be crucified and serve as a sin offering for man; the Holy Spirit can move man’s heart, grasp all matters, enlighten and guide man. That is a Trinity who has distinct persons of different functions, and that the combination of Gods of three persons is a complete God Himself. Therefore, the majority of believers pray in the name of the Father, the Son and the Holy Spirit. Then, are we right or wrong in this opinion? Does the “Trinity” make sense? We will fellowship about it. 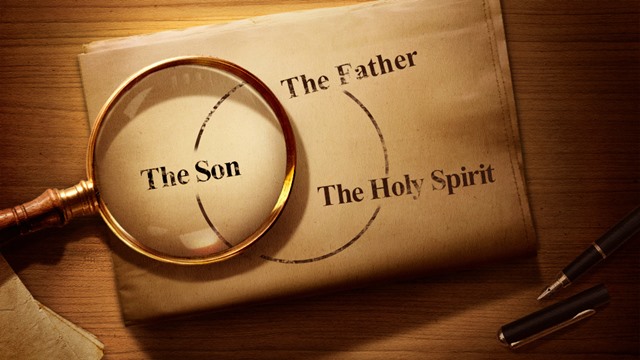 In the light of this issue, first, let’s study several verses. It says in Genesis 1:2, in the beginning the Spirit of God moved on the face of the waters, while it doesn’t say that the Spirit of the Trinity moved on the face of the waters; furthermore, God appeared to Abraham, as the one true God; Moses personally saw Jehovah’s back, heard Jehovah speak, and dialogued with Him many times in his life as well. However, he never told the Israelites that Jehovah God was the Trinity; never have those ancient saints and prophets, such as Job, Daniel, David and Samuel and so on, said that God was one who was made up of three parts. In addition, let’s read the words in Isaiah 43: 10-13: “You are my witnesses, said the LORD, and my servant whom I have chosen: that you may know and believe me, and understand that I am he: before me there was no God formed, neither shall there be after me. I, even I, am the LORD; and beside me there is no savior. I have declared, and have saved, and I have showed, when there was no strange god among you: therefore you are my witnesses, said the LORD, that I am God. Yes, before the day was I am he; and there is none that can deliver out of my hand: I will work, and who shall let it?” From these scriptures, we can see Jehovah God Himself told the Israelites that He was the one true God, that beside Him there was no other God, and that after Him there surely would not be. In the entire Age of Law, everyone knew God is the unique true God, and that beside Him there is no other true God, nor is there the saying about the Father, the Son and the Holy Spirit at all.

Then, when does the concept of the Trinity appear? In truth, there has been the concept of “Father and Son” since the incarnate Lord Jesus came on earth. Most of the believers accept it on the basis of the records in Matthew: “Go you therefore, and teach all nations, baptizing them in the name of the Father, and of the Son, and of the Holy Ghost” (Matthew 28:19). “And he went a little farther, and fell on his face, and prayed, saying, O my Father, if it be possible, let this cup pass from me: nevertheless not as I will, but as you will” (Matthew 26: 39). When the Lord Jesus came into flesh to do His work, to make people know more easily that He is the appearance of God Himself, and that His words and utterances are words of God Himself, He told people that it was all right to pray, confess and repent in the name of the Father, the Lord Jesus or the Holy Spirit, allowing people to accept God’s redemption with relief and freedom. The Lord Jesus prayed to God the Father in heaven, which people couldn’t understand, so they thought there is also a God the Father in heaven. As a matter of fact, this was that the Lord Jesus in humanity prayed to God’s Spirit. He prayed in Gethsemane from the standpoint of a created human being, and called God in heaven Father—this revealed clearly His humility and obedience. When He was nailed to the cross, He prayed to God the Father—this all showed the substance of Christ is absolute obedient to God. Because people didn’t comprehend the Lord Jesus’ words purely, they gave explanation that God is the Trinity. From then on, the idea of the Trinity has continued to this day.

Let’s study another scripture: Someone asked the Lord Jesus which one mattered most in His commandments. And Jesus answered him, “The first of all the commandments is, Hear, O Israel; The Lord our God is one Lord” (Mark 12: 29). Why did the Lord Jesus specially stress this one? Didn’t He want people to understand that God is unique? In fact, at the time of creation there was only one God’s Spirit. Jehovah God said He Himself is the unique true God. The Lord Jesus also said God is unique. As can be seen, for God, there is never the idea of the Trinity at all. Thank the Lord for His enlightenment, which makes us understand this aspect of the truth. All the glory and praise be to God. Amen!

• God Has Never Said That He Is a Trinity

• Exploring the Mystery of the Trinity, I Understood the Father and Son Relationship

» Most people also watch Gospel Video Clip: “Exploration of the ‘Trinity'” (1) - The Father and the Son Are One?

Previous Can You Discern the Voice of Satan?
Next The 3 Manifestations of Job’s Fear of God in the Bible

Does the Idea of the Trinity Hold up?

By Zhong Qi Early one morning, the birds were chirping outside the widow. As always, I got up and began to practice spiritual devotion. As I read the…

At this key time of the Lord’s coming in the last days, how can we avoid refusing the Lord’s gospel of the last days because of bewaring false Christs? Read this article to learn these 3 principles of discernment.