What Is the True Meaning of Rapture? 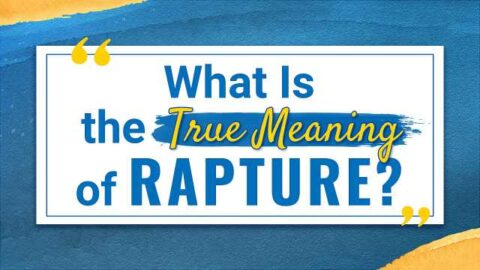 Wang Lan is an important co-worker of a certain Local Church. Seeing that the Lord Jesus didn’t come back in 2000, many brothers and sisters had become cold in faith and love since then, and didn’t attend meetings. Although she preached and worked everywhere out of courtesy, as a matter of fact she was extremely perplexed in her heart. The Lord Jesus didn’t come to rapture them in 2000. Was it because the Lord didn’t come or because they walked the wrong path and were abandoned by the Lord? She didn’t know. Furthermore, she didn’t dare to expose these questions either …

The co-worker Li Hua was always active and enthusiastic. However, all these times she had been absent from the meetings. In the afternoon, Wang Lan as well as Liu Yun visited Li Hua together.

They knocked on Li Hua’s door. Li Hua appeared somewhat gaunt. After an exchange of simple greetings, Li Hua spoke her innermost feelings confidentially, “Ah, Sister Wang, Sister Liu, in fact I don’t want to miss the meetings, but you know clearly the condition of the church now. Our church doesn’t have the Lord’s presence at all. I can’t feel the leading of the Lord. Even if I go to the meetings, I’ll listen to the same old sermons. It would be better to think to myself at home: Why don’t we have the presence and leading of the Lord? Over this period of time, I’ve kept on powdering this question. In my opinion, it seems that we followed man, took the wrong path, and were abandoned by the Holy Spirit. Otherwise, according to Brother Lin’s way of pursuit, we should be increasingly transformed and grow more and more confident. Moreover, the church shouldn’t be so desolate now. Don’t you think so?”

Liu Yun’s words struck Wang Lan’s heart like a blade. Wang Lan nodded and said, “During this period, actually I’ve studied the prophecies about the Lord’s return in the Bible carefully. And I saw the prophecies have been already fulfilled. Since that is the case, does it prove that the Lord has come back? It’s just that we aren’t raptured, but maybe other churches have gone first.” Hearing Wang Lan’s words, Li Hua seemed to be a bit excited. She said with excitement, “I think it’s possible. If other churches really get raptured, it proves that our church did walk the wrong path and was forsaken by the Lord. Then where does the Lord appear to work now?” Wang Lan continued to say, “Based on the prophecies in the Bible, there are two possible ways that the Lord shall return. One is to come in secret. The other is to publicly appear. I think the Lord will possibly return in this way—secretly descending first and then appearing publicly. Now it’s the end of the last days. Maybe the Lord has descended in secret, but we don’t know yet. Just as when the Lord Jesus once worked on earth, only a small minority of people recognized and followed Him. Not until He was crucified and appeared to man publicly after His resurrection did more people know He was the upcoming Messiah.”

The three sisters spoke what was in their hearts boldly. They held a dialogue with one another. The more they discussed it, the clearer it was.

Liu Yun: Sister Wang, I completely agree with you on your understanding. Maybe the Lord has really come back. If we don’t seek, we’ll be cast away.

Li Hua: That being the case, we shouldn’t sit and passively wait for death. We should go out to search for the footsteps of God’s work. However, where should we look for them?

Wang Lan: The Lord Jesus said He’d return. He came in the flesh, and then He’ll become incarnate as the Son of man to work on earth when He returns. His words can prove this. He said, “For as the lightning, that lightens out of the one part under heaven, shines to the other part under heaven; so shall also the Son of man be in his day. But first must he suffer many things, and be rejected of this generation” (Luk 17:24-25). I think “the Son of man” here must refer to God incarnate. If God doesn’t come into flesh to do His work, how can He suffer a lot and be rejected by this age? It is also prophesied in Revelation, “And I turned to see the voice that spoke with me. And being turned, I saw seven golden candlesticks; And in the middle of the seven candlesticks one like to the Son of man, clothed with a garment down to the foot, and girt about the breasts with a golden girdle” (Rev 1:12-13). “He that has an ear, let him hear what the Spirit says to the churches; …” (Rev 2:7). As can be seen, when God returns in the last days, He should be incarnated as the Son of man and speak to the churches. The Lord Jesus also said, “My sheep hear my voice….” (Jhn 10:27). Thereupon, we should be wise virgins, searching for God’s voice. Where there is what the Spirit says to the churches, there is God’s voice. When we find God’s voice and accept His work, we will be raptured. The rapture that I understand is to accept the Son of man incarnate and come before God. That is rapture. If we don’t accept the Lord’s return, we’ll be forsaken and won’t be raptured.

Liu Yun: You’re right! It’s likely that the Lord returns to earth as the Son of man through incarnation to do His work. To accept the incarnate Son of man is truly being raptured. We should be wise virgins, searching for God’s voice. Only if we find God and accept His new work have we truly been raptured.

Li Hua: Ah, your words are enlightened and illuminated by the Holy Spirit. We now know the true meaning of rapture. It means the Lord comes to earth to look for us. When we hear His voice, we return before Him. We are raptured. Not that He stands in the air and takes us to heaven. That’s man’s notion and imagination. It’s untenable.

Wang Lan: According to the prophecy in Revelation, the Philadelphia Church will be raptured when the Lord comes. And it also says in Revelation 3:12-13, “Him that overcomes will I make a pillar in the temple of my God, and he shall go no more out: and I will write on him the name of my God, and the name of the city of my God, which is new Jerusalem, which comes down out of heaven from my God: and I will write on him my new name. He that has an ear, let him hear what the Spirit says to the churches.” “My new name” mentioned here must mean that the Lord will have a new name when He returns. The church that can hear God’s voice and accept His new name is the Philadelphia Church. They are the only church who are truly raptured. Those who accept the Lord’s return are the ones that have received the rapture and that will feast with Him. Those who can’t hear Him or accept His new name, they’ll be forsaken. It should be that way.

After some discussion, Wang Lan’s gloom vanished. In her view, the topic discussed in the afternoon was inspired by the Holy Spirit. Now she knew what the true meaning of rapture was and understood that her understanding of rapture in the past was really her notion and imagination, which absolutely didn’t conform to the actual facts. Yet aside from excitement, they fell into another confusion: What should they do to be wise virgins, keep pace with the footsteps of the Lamb and attend the wedding feast of the Lamb, so that they won’t be rejected by the Lord?

Previous What Is Being Raptured Before the Disasters? How Can We Become Overcomers?
Next All of us have believed in the Lord for many years, and have always followed the example of Paul in our work for the Lord. We have been faithful to the name and way of the Lord, and the crown of righteousness surely awaits us. Today, we need only focus on working hard for the Lord, and watching for His return. Only thus, can we be taken into the kingdom of heaven. That’s because in the Bible it is said that “for they shall not be ashamed that wait for Me” (Isa 49:23). We believe the Lord’s promise: He will take us into the kingdom of heaven at His return. Could there really be anything wrong with practicing in this way?

True Meaning of Following the Heavenly Father's Will

On a spring morning, the sun was slowly rising from the east, shining upon the earth. The grass and the flowers by the roadside were breathing the fresh air in high spirits. The twittering birds also couldn’t wait to sing songs. Everything looked lively. Li Yang was joyfully walking on the way to Ye Ling’s […]

What Is Truly Doing God’s Will?

Brothers and sisters, Recently, there’s something I’m not clear on. I have communicated about it with many brothers and sisters, but finally, I didn’t get a positive result. Just when I didn’t know what to do next, a sister recommended your website. She said that while she was surfing online, she saw that your fellowship […]

The Mystery of God’s Name: The Lord Shall Have a New Name Upon His Return

As believers in the Lord, we all know that God’s name is Jehovah in the Old Testament, and Jesus in the New Testament. We also know that the Lord once prophesied that He will come again in the last days. So here is a question: Will the Lord still be called Jesus when He returns? […]

Do You Know the Meaning of Different Names of God?

God’s name is Jehovah, just as the Old Testament records, “I, even I, am Jehovah; and beside me there is no savior” (Isaiah 43:11). “This is my name for ever, and this is my memorial to all generations” (Exodus 3:15). However, the New Testament records, “Jesus Christ the same yesterday, and to day, and for […]