In the past, I always thought that as long as believers in God could hold fast to external good deeds, spend for the Lord zealously, and suffer and pay the price to preach and work everywhere for the Lord, they would bring joy to the Lord and gain the eternal blessings when the Lord came.

One day, I came across a story in the Bible: “Jesus entered into a certain village: and a certain woman named Martha received him into her house. And she had a sister called Mary, which also sat at Jesus’ feet, and heard his word. But Martha was encumbered about much serving, and came to him, and said, Lord, do you not care that my sister has left me to serve alone? bid her therefore that she help me. And Jesus answered and said to her, “Martha, Martha, you are careful and troubled about many things: But one thing is needful: and Mary has chosen that good part, which shall not be taken away from her” (Luke 10:38-42). When I repeatedly contemplated the exchange between the Lord Jesus and Martha, I realized that what I held to were just my conceptions and imaginations. I actually had no knowledge of what kind of people the Lord liked and approved of. From these passages of scripture, I saw: When Martha received the Lord Jesus into her house, she thought according to her notions and imaginations that she would bring joy to the Lord and obtain the blessings if she made her room clean and tidy, was dressed neatly, and busied herself enthusiastically serving the Lord. However, the Lord did not approve of what Martha did. Instead, He commended Mary who listened to His sermons quietly, saying that she had received the blessings. From this, I deeply felt that the Lord approved not of man’s passion and external good deeds, but commended those like Mary who listened to His words quietly, and focused on understanding His will and practicing according to His teachings, and that only such people could gain God’s blessings and promises in the end.

Contemplating the Lord’s words, I gradually had some understanding of God’s will to save mankind. I saw that God appeared and worked among mankind not for enjoying our warm hospitality or asking for our flatteries and outward sacrifices. Instead, He came to express the truth and wanted us to know His righteous disposition and His beauty and goodness from His words and work, and practice according to His words, so that we would revere God, obey God, love God, and become ones who were of one mind with God. Therefore, only if we focus on listening to God’s voice and practicing God’s words can we understand the truth, serve in harmony with God’s will, and ultimately be worthy to inherit God’s beautiful promises. Just as the Lord Jesus said: “But whoever drinks of the water that I shall give him shall never thirst; but the water that I shall give him shall be in him a well of water springing up into everlasting life” (John 4:14).

I couldn’t help remembering when the Lord Jesus was doing His work, those who were simple and loved the truth did not cling to their notions and conceptions but focused on listening to the Lord’s words, so they finally beheld the appearance of God from the Lord’s words. They felt that the Lord’s words contained power and authority, could supply man with life, and could not be expressed by any man. Therefore, they believed that the Lord Jesus was the Messiah who was to come, and then they followed God’s footsteps and received the Lord’s blessings. For example, after Peter had listened to the Lord’s preachings for a while, he was enlightened by the Holy Spirit, recognizing that the Lord Jesus was the Son of the living God. Then he said to the Lord Jesus, “Lord, to whom shall we go? you have the words of eternal life” (John 6:68). For another example, Nathanael let go of his conceptions and imaginations and followed the Lord Jesus after hearing that the Lord Jesus had already known him when he was under the fig tree. … All these people followed God’s footsteps and beheld God’s appearance because of listening to the Lord’s words, and they finally received the great blessings of the Lord. On the other hand, those priests, scribes, and Pharisees who served Jehovah God in the temple traveled far and wide to preach gospel and suffered a lot, but they did not pay attention to listening to the Lord’s words and did not recognize the Lord. They had clearly witnessed that the words and work of the Lord Jesus shocked all of Judea and were from God, but they did not accept any truth expressed by the Lord. Moreover, they held on to the laws of the Old Testament and did their utmost to search for handles against the Lord Jesus, and condemned the Lord on the excuse that He did not observe the Sabbath and was not called the Messiah. In the end, they nailed the Lord Jesus to the cross, committing a heinous crime. This proves that if believers in God only pay attention to outward suffering and sacrifice, do not pay attention to listening to God’s words, they will possibly become ones detested and rejected and condemned by God at any time.

Now, various disasters have occurred frequently, and four blood moons have appeared. The prophecies concerning the return of the Lord have been fulfilled. How should we practice in order to welcome the second coming of the Lord and receive the eternal blessings? I remembered it was said in Revelation: “And I saw another angel fly in the middle of heaven, having the everlasting gospel to preach to them that dwell on the earth, and to every nation, and kindred, and tongue, and people” (Revelation 14:6). “He that has an ear, let him hear what the Spirit said to the churches” (Revelation 2:29). “Behold, I stand at the door, and knock: if any man hear my voice, and open the door, I will come in to him, and will sup with him, and he with me” (Revelation 3:20). These verses show that if we want to obtain the eternal blessings, we must seek out the words of the Holy Spirit to the churches, that is, listen to the voice of the Bridegroom; and only by doing so can we be the wise virgins and behold the appearance of the Lord, and have the opportunity to be approved by the Lord.

While thinking of this, I felt brightened within. Then I thought of the words of the Lord Jesus: “I have yet many things to say to you, but you cannot bear them now. However, when he, the Spirit of truth, is come, he will guide you into all truth: for he shall not speak of himself; but whatever he shall hear, that shall he speak: and he will show you things to come” (John 16:12-13). I was even more assured that the Lord would still express a lot of truth and reveal all the mysteries when He came again in the last days. So we should put aside our conceptions and imaginations, focus on listening to God’s voice like Mary, and follow the Lamb’s footsteps. Only in this way can we possibly receive the truth, the way, and the life expressed by the Lord in the last days, and thus gain the eternal blessings of the kingdom of heaven. Now, on the internet, only the Church of Almighty God is openly testifying that the Lord has returned. We can only discern whether Almighty God is the returned Lord Jesus by hearing if the voice of Almighty God is truly that of God. 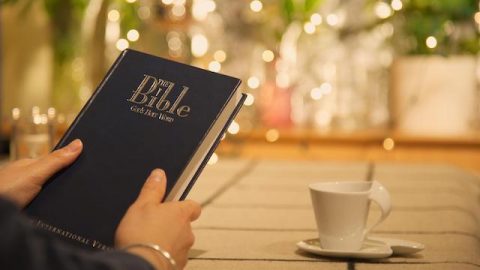 How Will Jesus Return? Have You Welcomed the Return of Jesus?
Jesus really has returned? How are the prophecies of the return of Jesus as a thief fulfilled? Through reading God’s words, I’ve found the answer.

Will the Lord First Give Revelation to Pastors Upon His Second Coming?
Most of us Christians maintain that, the Lord will first give revelation to pastors and elders upon His second coming and that as long as we follow pastors, we will be able to welcome the Lord. Is this viewpoint correct?