Gen 2:18–20 And Jehovah God said, It is not good that the man should be alone; I will make him an help meet for him. And out of the ground Jehovah God formed every beast of the field, and every fowl of the air; and brought them to Adam to see what he would call them: and whatever Adam called every living creature, that was the name thereof. And Adam gave names to all cattle, and to the fowl of the air, and to every beast of the field; but for Adam there was not found an help meet for him.

Gen 2:22–23 And the rib, which Jehovah God had taken from man, made He a woman, and brought her to the man. And Adam said, This is now bone of my bones, and flesh of my flesh: she shall be called Woman, because she was taken out of Man. 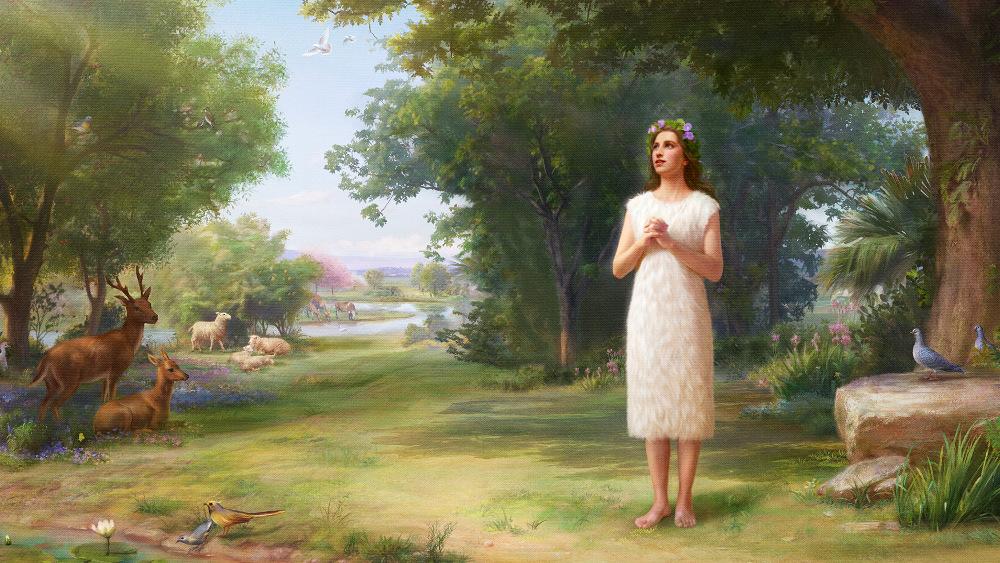 There is one key line in this part of Scripture: “whatever Adam called every living creature, that was the name thereof.” So, who gave all living creatures their names? It was Adam, not God. This line tells mankind a fact: God gave man intelligence when He created him. That is to say, man’s intelligence came from God. This is a certainty. But why? After God created Adam, did Adam go to school? Did he know how to read? After God made various living creatures, did Adam recognize all of these creatures? Did God tell him what their names were? Of course, God also did not teach him how to come up with the names of these creatures. That is the truth! How, then, did Adam know how to give these living creatures their names and what kind of names to give them? This is related to the question of what God added to Adam when He created him. The facts prove that when God created man, He added His intelligence to him. This is a key point, so listen carefully. There is also another key point that you should understand: After Adam gave these living creatures their names, these names became set in God’s vocabulary. Why do I mention this? Because this also involves God’s disposition, and this is a point I must expound on further.

God created man, breathed life into him, and also gave him some of His intelligence, His abilities, and what He has and is. After God gave man all of these things, man was able to do some things independently and think on his own. If what man comes up with and does is good in the eyes of God, then God accepts it and does not interfere. If what man does is right, God will let it stand. So, what does the phrase “whatever Adam called every living creature, that was the name thereof” indicate? It indicates that God did not see fit to alter any of the names given to the various living creatures. Whatever name Adam called a creature, God would say “So it is,” affirming the creature’s name. Did God express any opinion on the matter? No, He certainly did not. So, what do you gather from this? God gave man intelligence and man used his God-given intelligence to do things. If what man does is positive in the eyes of God, then it is affirmed, acknowledged, and accepted by God without any judgment or criticism. This is something no person or evil spirit, or Satan, can do. Do you see a revelation of God’s disposition here? Would a human being, a corrupted person, or Satan permit anyone else to do something in their name, right under their nose? Of course not! Would they fight over this position with that other person or other force that is different from them? Of course they would! If it were a corrupted person or Satan who was with Adam at that time, they would have certainly repudiated what Adam was doing. To prove that they have the ability to think independently and have their own unique insights, they would have absolutely denied everything Adam did: “You want to call it this? Well, I’m not going to call it this, I’m going to call it that; you called it Tom but I’m going to call it Harry. I have to show how clever I am.” What kind of nature is this? Is it not wildly arrogant? And what of God? Does He have such a disposition? Did God have any unusual objections to what Adam was doing? The answer is unequivocally no! Of the disposition God reveals, there is not the slightest hint of argumentativeness, arrogance, or self-righteousness. That much is clear here. This may appear to be a minor point, but if you do not understand God’s essence, if your heart does not try to figure out how God acts and what God’s attitude is, then you will not know God’s disposition or see the expression and revelation of God’s disposition. Is that not so? Do you agree with what I just explained to you? In response to Adam’s actions, God did not grandiosely proclaim, “You have done well, you have done right, and I concur!” In His heart, however, God approved, appreciated, and applauded what Adam did. This was the first thing since creation that man had done for God at His instruction. It was something man did in God’s stead and on God’s behalf. In God’s eyes, this arose out of the intelligence He bestowed upon man. God saw it as a good thing, a positive thing. What Adam did at that time was the first manifestation of God’s intelligence in man. It was a fine manifestation from God’s point of view. What I want to tell you here is that God’s aim in imparting to man something of what He has and is and of His intelligence was so that mankind could be the living creature that manifests Him. For such a living creature to act on His behalf was precisely what God had been longing to see.

Gen 3:20–21 And Adam called his wife’s name Eve; because she was the mother of all living. To Adam also and to his wife did Jehovah God make coats of skins, and clothed them. Let us take a look at this third passage, which states that there is indeed meaning behind the name Adam gave […]

2. How Satan Uses Science to Corrupt Man What is science? Is not science held in high prestige in the mind of each and every human and considered profound? When science is mentioned, do people not feel: “This is something beyond the reach of ordinary people; this is a topic that only scientific researchers or […]