Gen 3:20–21 And Adam called his wife’s name Eve; because she was the mother of all living. To Adam also and to his wife did Jehovah God make coats of skins, and clothed them. 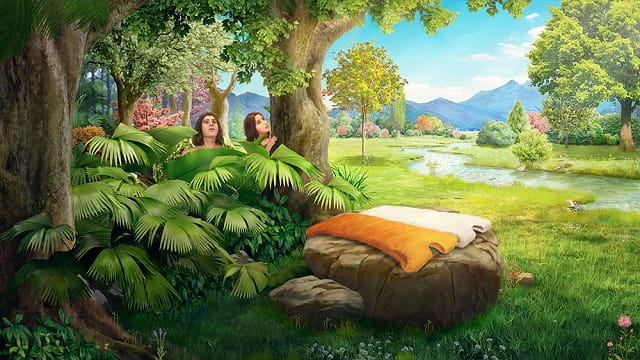 Let us take a look at this third passage, which states that there is indeed meaning behind the name Adam gave Eve. This shows that after being created, Adam had his own thoughts and understood many things. But for now, we are not going to study or explore what he understood or how much he understood, because that is not My main aim in discussing the third passage. So, what is the main point I want to highlight? Let us take a look at the line, “To Adam also and to his wife did Jehovah God make coats of skins, and clothed them.” If we do not discuss this line of Scripture in our fellowship today, you might never realize the deeper implications of these words. First, let Me give some clues. Imagine, if you will, the Garden of Eden, with Adam and Eve living in it. God goes to visit them, but they hide because they are naked. God cannot see them, and after He calls out to them, they say, “We dare not see You for our bodies are naked.” They do not dare to see God because they are naked. So, what does Jehovah God do for them? The original text says: “To Adam also and to his wife did Jehovah God make coats of skins, and clothed them.” From this, do you understand what God used to make their clothes? God used animal skins to make their clothes. That is to say, God made coats of fur for man to wear as clothing. These were the first pieces of clothing God made for man. A fur coat is a luxurious item by today’s standards and not something everyone can afford to wear. If someone asks you: What was the first piece of clothing worn by our ancestors? You can answer: It was a fur coat. Who made this fur coat? You can then respond: God made it! That is the main point here: This clothing was made by God. Is that not something worth discussing? After hearing My description, has an image emerged in your mind? You should have at least a rough outline. The point of telling you this today is not so you know what man’s first piece of clothing was. What, then, is the point? The point is not the fur coat, but how people come to know—as revealed by God in what He did here—His disposition, what He has, and what He is.

“To Adam also and to his wife did Jehovah God make coats of skins, and clothed them.” In this scene, what kind of role do we see God assume when He is with Adam and Eve? In what way does God manifest Himself, in this world with only two human beings? Does He manifest Himself in the role of God? Brothers and sisters from Hong Kong, please answer. (In the role of a parent.) Brothers and sisters from South Korea, what kind of role do you think God appears as? (Head of the family.) Brothers and sisters from Taiwan, what do you think? (The role of someone in Adam and Eve’s family, the role of a family member.) Some of you think God appears as a family member of Adam and Eve, while some say God appears as the head of the family and others say as a parent. All of these are very appropriate. But do you see what I am getting at? God created these two people and treated them as His companions. As their only family, God looked after their lives and took care of their food, clothing and shelter needs. Here, God appears as a parent of Adam and Eve. While God does this, man does not see how lofty God is; he does not see God’s supremacy, His mystery, and especially not His wrath or majesty. All he sees is God’s humbleness, His affection, His concern for man and His responsibility and care for him. The attitude and way in which God treated Adam and Eve is akin to how parents show concern for their children. It is also like the way parents love, look after, and care for their own sons and daughters—real, visible, and tangible. Instead of elevating Himself to a high and mighty position, God personally used skins to make clothing for man. It does not matter whether this fur coat was used to cover their modesty or to shield them from the cold. What matters is that this clothing for covering man’s body was personally made by God with His own hands. Rather than simply thinking the clothing into existence or using some other miraculous means, as people might imagine God would do, God legitimately did something that man would have thought God would not and should not do. This might seem like a trivial thing—some people might not even think it is worth mentioning—but it allows any follower of God who was beset with vague conceptions about Him to gain an insight into His genuineness and loveliness, and to see His faithfulness and humbleness. It makes insufferably arrogant people who think they are high and mighty bow their conceited heads in shame in the face of God’s genuineness and humbleness. Here, God’s genuineness and humbleness further enables people to see how lovable He is. By contrast, the “immense” God, “lovable” God, and “omnipotent” God people hold in their hearts has become trifling and ugly, and crumbles at the slightest touch. When you see this verse and hear this story, do you look down upon God because He did such a thing? Some people might, but others will have the opposite reaction. They will think God is genuine and lovable, and it is precisely God’s genuineness and loveliness that moves them. The more they see the real side of God, the more they can appreciate the true existence of God’s love, the importance of God in their hearts, and how He stands beside them at every moment.

Now, let us relate our discussion back to the present. If God could do these various little things for the people He created at the very beginning, even things that people would never dare think of or expect, then could God do such things for people today? Some say, “Yes!” Why is that? Because God’s essence is not feigned, and His loveliness is not feigned. God’s essence truly exists and is not something added on by others, and certainly not something that changes with different times, places, and eras. God’s genuineness and loveliness can truly be brought out only by doing something people think is unremarkable and insignificant—something so trifling that people would not even think He would ever do it. God is not pretentious. There is no exaggeration, disguise, pride, or arrogance in His disposition and essence. He never boasts, but instead loves, shows concern for, looks after, and leads, with faithfulness and sincerity, the human beings He created. No matter how little people may appreciate, feel, or see what God does, He most certainly is doing it. Would knowing that God has such an essence affect people’s love for Him? Would it influence their fear of God? I hope when you understand the real side of God, you will grow even closer to Him and be able to more truly appreciate His love and care for mankind, as well as be able to give your heart to God and be delivered from suspicions and doubts about Him. God is quietly doing everything for man, doing it all silently through His sincerity, faithfulness, and love. But He never has any apprehensions or regrets over anything He does, nor does He ever need anyone to repay Him in any way or have intentions of ever obtaining anything from mankind. The only purpose of everything He has ever done is so He can receive mankind’s true faith and love. And with that, I will end the first topic here.

The Temptation of Satan Mat 4:1–4 Then was Jesus led up of the Spirit into the wilderness to be tempted of the devil. And when He had fasted forty days and forty nights, He was afterward an hungered. And when the tempter came to Him, he said, If You be the Son of God, command […]

Accept God’s Tests, Overcome Satan’s Temptations, and Allow God to Gain Your Whole Being During the work of God’s abiding provision and support of man, He tells the entirety of His will and requirements to man, and shows His deeds, disposition, and what He has and is to man. The objective is to equip man […]