The Serpent’s Seduction of the Woman 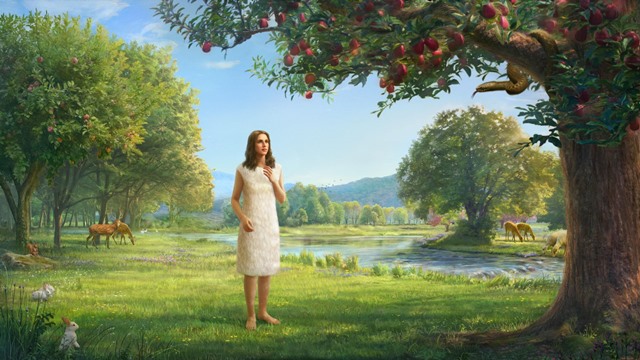 These two passages are excerpts from the book of Genesis in the Bible. Are you all familiar with these two passages? They relate events that happened at the beginning, when mankind was first created; these events were real. First let us look at what kind of command Jehovah God gave to Adam and Eve; the content of this command is very important for our topic today. “And Jehovah God commanded the man, saying, Of every tree of the garden you may freely eat: But of the tree of the knowledge of good and evil, you shall not eat of it: for in the day that you eat thereof you shall surely die.” What is the import of God’s command to man in this passage? Firstly, God tells man what he can eat, namely, the fruits of many kinds of trees. There is no danger and no poison; all can be eaten and eaten freely as man wishes, free from worry and doubt. This is one part of God’s command. The other part is a warning. In this warning, God tells man he must not eat the fruit from the tree of the knowledge of good and evil. What will happen if he eats from this tree? God told man: If you eat from it you will surely die. Are these words not straightforward? If God told you this but you did not understand why, would you treat His words as a rule or an order to be obeyed? Such words should be obeyed, should they not? But whether or not man is able to obey, God’s words are unequivocal. God told man very clearly what he may eat and what he may not eat, and what will happen if he eats what he may not eat. In these brief words that God spoke, can you see anything of God’s disposition? Are these words of God true? Is there any deception? Is there any falsity? Is there any intimidation? (No.) God honestly, truthfully and sincerely told man what he may eat and what he may not eat. God spoke clearly and plainly. Is there any hidden meaning in these words? Are these words not straightforward? Is there any need for conjecture? (No.) There is no need for guesswork. Their meaning is obvious at a glance. Upon reading them, one feels entirely clear about their meaning. That is, what God wants to say and what He wants to express comes from His heart. The things God expresses are clean, straightforward and clear. There are no covert motives, nor any hidden meanings. He speaks to man directly, telling him what he may eat and what he may not eat. That is to say, through these words of God, man can see that God’s heart is transparent and true. There is no trace of falsehood here; it is not a case of telling you that you may not eat what is edible, or telling you “Do it and see what happens” with things that you cannot eat. This is not what God means. Whatever God thinks in His heart, that is what He says. If I say God is holy because He shows and reveals Himself within these words in this way, you may feel that I have made a mountain out of a molehill or that I have stretched a point a little too far. If so, do not worry; we are not yet finished.

Excerpted from “God Himself, the Unique IV” in The Word Appears in the Flesh

The Temptation of Satan Mat 4:1–4 Then was Jesus led up of the Spirit into the wilderness to be tempted of the devil. And when He had fasted forty days and forty nights, He was afterward an hungered. And when the tempter came to Him, he said, If You be the Son of God, command […]