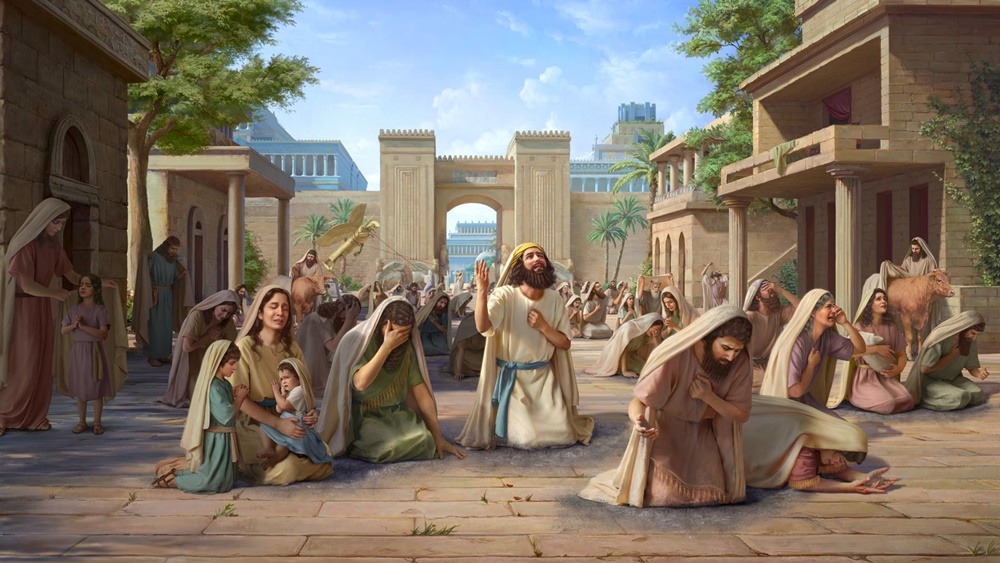 Regardless of how angry God had been with the Ninevites, as soon as they declared a fast and donned sackcloth and ashes, His heart began to soften and He began to change His mind. When He proclaimed to them that He would destroy their city—the moment prior to their confession and repentance for their sins—God was still angry with them. Once they had carried out a series of repentant acts, God’s anger for the people of Nineveh gradually transformed into mercy and tolerance for them. There is nothing contradictory about the coinciding revelation of these two aspects of God’s disposition in the same event. So, how should one understand and know this lack of contradiction? God expressed and revealed each of these two polar-opposite essences in turn as the people of Nineveh repented, allowing people to see the realness and the unoffendableness of God’s essence. God used His attitude to tell people the following: It is not that God does not tolerate people, or that He does not want to show mercy to them; rather, it is that they rarely truly repent to God, and it is rare that people truly turn away from their evil ways and abandon the violence in their hands. In other words, when God is angry with man, He hopes that man will be able to truly repent, and indeed He hopes to see man’s true repentance, in which case He will then liberally continue to bestow His mercy and tolerance upon man. This is to say that man’s evil conduct incurs God’s wrath, whereas God’s mercy and tolerance are bestowed upon those who listen to God and truly repent before Him, upon those who can turn away from their evil ways and abandon the violence in their hands. God’s attitude was very clearly revealed in His treatment of the Ninevites: God’s mercy and tolerance are not at all difficult to obtain, and what He requires is one’s true repentance. As long as people turn away from their evil ways and abandon the violence in their hands, God will change His heart and His attitude toward them.

By understanding these examples of God’s speech, thoughts and actions, are you able to understand God’s righteous disposition, a disposition that will not tolerate being offended by man? In short, regardless of how much man can understand of it, this is an aspect of the disposition of God Himself, and it is unique to Him. […]

First, let us look at several passages of scripture which describe God’s destruction of Sodom. Gen 19:1–11 And there came two angels to Sodom at even; and Lot sat in the gate of Sodom: and Lot seeing them rose up to meet them; and he bowed himself with his face toward the ground; And he […]

After Sodom’s Repeated Hostility and Resistance Toward Him, God Utterly Eradicates It

Now that we have a general understanding of God’s righteous disposition, we may return our attention to the city of Sodom—a place that God saw as a city of sin. By understanding the substance of this city, we can understand why God wanted to destroy it and why He destroyed it so completely. From this, […]