The Sin of Blasphemy Against the Holy Spirit Shall Never Be Forgiven – Reflection on Matthew 12:31-32 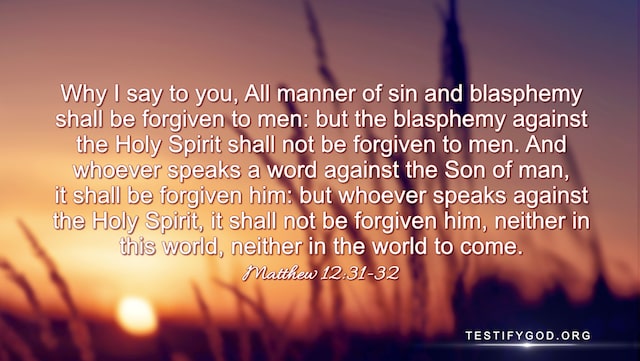 The Lord Jesus’ words tell us that mankind’s all manner of sin shall be forgiven, but the blasphemy against the Holy Spirit shall never be forgiven in neither this world nor the next. From this we can see God’s unoffendable disposition as well as His attitude toward people, matters and things and principles for handling them. Just as God’s words say, “God’s treatment of people who blaspheme or resist Him, or even those who malign Him—people who intentionally attack, malign, and curse Him—He does not turn a blind eye or a deaf ear. He has a clear attitude toward them. He despises these people, and in His heart He condemns them. He even openly declares the outcome for them, so that people know that He has a clear attitude toward those who blaspheme Him, and so that they know how He will determine their outcome.” From God’s words we recognized that though God is merciful and loving, He also has dignity. If we deliberately oppose and blaspheme God, we can only be punished by Him at last. Just as the Pharisees, they merely blindly opposed and blasphemed the Lord Jesus’ work, and even nailed Him to the cross. In the end, they were punished by God and suffered the loss of their nation.

Although God’s Wrath Is Hidden and Unknown to Man, It Tolerates No Offense
Read More

We Shall Pursue Everlasting Life – Gospel Reflection on John 6:27

The Value of Hardships – Reflection on Proverbs 1:32

Today’s Gospel For the turning away of the simple shall slay them, and the prosperity of fools shall destroy them. - Proverbs 1:32 Reflection Two days ago, I took the potted to the outdoor. After a rain, it was almost limp like frosted eggplant. I was aching and thought: It’s hopeless … However, this morning […]

They be Blind Leaders of the Blind – Reflection on Matthew 15:14

Today's Gospel Let them alone: they be blind leaders of the blind. And if the blind lead the blind, both shall fall into the ditch.—Matthew 15:14 Reflection When Lord Jesus did His work, many people without discernment followed the Pharisees to commit an unforgivable crime—nailed the Lord Jesus to the cross. Finally, they were cursed […]