Will the Lord Jesus Come as a Thief or Come Upon a Cloud?

Shufen was a co-worker of a church. During her fifteen years of believing in the Lord, she had been actively serving in the church and been yearning for the Lord to soon return and raise her up into the heavenly kingdom. She thought, “Now is already the end of the last days. All the prophecies in the Bible concerning the Lord’s return have basically been fulfilled. Particularly in recent years, the four consecutive blood moons appeared, famines, plagues, typhoons, earthquakes, mudslides, and wars are occurring one after another in countries around the world. Some people even heard mysterious sound of trumpets in many places, which is earth-shattering.” Shufen felt that the day of the Lord’s return should be soon. To be able to welcome the Lord’s return, she recently led the brothers and sisters to discuss the way for the Lord to return. Unexpectedly, they split on this matter, and two opinions were formed. They were at a stalemate. Some brothers and sisters said that the Lord would publicly appear with clouds to all people and all nations when He comes, as the Bible says, “He comes with clouds; and every eye shall see Him” (Revelation 1:7). But, some said that the Lord would come in secret to steal treasures, which was based on the prophecy in Revelation, “I will come on you as a thief” (Revelation 3:3). And even after several gatherings, they still couldn’t reach a definite conclusion. Shufen was at her wits’ end now, and she herself also couldn’t figure out how the Lord would appear to man when He returns. Since both opinions of the brothers and sisters were based on the Bible, it was really hard to judge which of them was right. She was troubled so much that she couldn’t eat or sleep well those days, totally being at a loss as to what to say to the brothers and sisters about this matter.

After dinner, she took out the Bible again, expecting to receive the Lord’s guidance and enlightenment on the truth concerning how the Lord would come in the last days. Her husband, as usual, was communicating with the brothers and sisters from other countries on Facebook. Suddenly, he called her, “Shufen, come and see this quickly. Brothers and sisters are discussing the way for the Lord to return.” Hearing this, she immediately laid aside the Bible in her hands, and went up to the computer. A video, The Mystery of the Coming of the Son of Man was being shown on Facebook. The brothers’ fellowship in the video was well-founded and attracted her attention all at once. 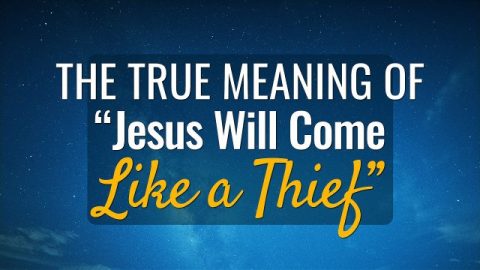 After watching the video, she said with surprise, “Their fellowship is rather reasonable. It’s the enlightenment from the Holy Spirit. They bear witness that the Lord will return in secret as the Son of man through incarnation to do the work of judgment starting from the house of God, make a group of overcomers before the disaster, and then appear to all people and all nations. Their fellowship is totally in line with the Bible!” Her husband nodded his approval, saying, “The Lord Jesus has said: ‘Be you therefore ready also: for the Son of man comes at an hour when you think not’ (Luke 12:40), ‘For as the lightning, that lightens out of the one part under heaven, shines to the other part under heaven; so shall also the Son of man be in His day. But first must He suffer many things, and be rejected of this generation’ (Luke 17:24-25), ‘And at midnight there was a cry made, Behold, the bridegroom comes; go you out to meet him’ (Matthew 25:6), ‘Behold, I stand at the door, and knock: if any man hear My voice, and open the door, I will come in to him, and will sup with him, and he with Me’ (Revelation 3:20), ‘Behold, I come as a thief. Blessed is he that watches, and keeps his garments, lest he walk naked, and they see his shame’ (Revelation 16:15). Now all these prophecies have been fulfilled. The Lord Jesus repeatedly said ‘the Son of man’ in the prophecies. Does ‘the Son of man’ not refer to the incarnate Christ? And if the Lord comes back in a spiritual body like after His resurrection, then ‘But first must He suffer many things, and be rejected of this generation’ will be untenable, for only His flesh can suffer and be rejected, and His spiritual body cannot.”

Her husband replied, “Do you remember the Lord’s prophecies? He said: ‘I have yet many things to say to you, but you cannot bear them now. However, when He, the Spirit of truth, is come, He will guide you into all truth: for He shall not speak of Himself, but whatever He shall hear, that shall He speak: and He will show you things to come’ (John 16:12-13), ‘He that rejects Me, and receives not My words, has one that judges him: the word that I have spoken, the same shall judge him in the last day’ (John 12:48), ‘For the Father judges no man, but has committed all judgment to the Son’ (John 5:22), ‘And has given Him authority to execute judgment also, because He is the Son of man’ (John 5:27). These scriptures imply that the Lord Jesus will be incarnated as the Son of man to express the truth to do the work of judgment. And ‘the Spirit of truth,’ I think, may refer to the incarnate Christ who will speak words, so those who can hear and recognize the voice of God will behold the return of the Lord. Just as the Lord Jesus said, ‘And at midnight there was a cry made, Behold, the bridegroom comes; go you out to meet him’ (Matthew 25:6). So, that all depends on whether we are the wise virgins who can know the voice of God.”

“So let’s seek this aspect of the truth from the brothers and sisters who posted the video!” After they spoke out their wish with one voice, they smiled. Shufen’s days of gloom were finally dispelled.

» You may be interested in reading more on our Waiting for Jesus’ Return page, or in the articles below.: 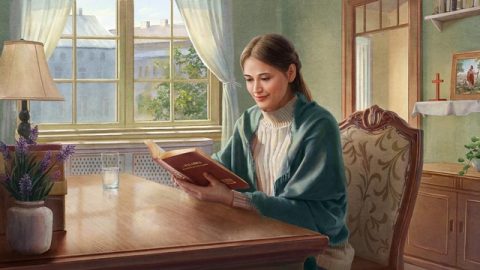 How Will Jesus Return? Have You Welcomed the Return of Jesus?

Does Anyone Know When the Lord Jesus Returns to Work?
Read More

Desolation Caused Confusion As the night fell, Qianxun sat in the yard and enjoyed the cool night breeze after supper. Her husband came over with two fans and handed one to Qianxun, asking with concern: “What are you thinking? You look upset after coming back from the meeting with the co-workers. What happened? Tell me.” […]

I’ve Learned How to Recognize the Returned Lord

Brother Li felt puzzled about whether one can recognize the Lord according to the Lord Jesus’ form in welcoming His return, so he went to Brother Zhao to seek and explore it. On seeing Brother Zhao, he said without preamble, “The Bible says, ‘You men of Galilee, why stand you gazing up into heaven? this […]

Hear the Voice of God and Behold His Appearance

The Lord clearly prophesied: “Behold, I stand at the door, and knock: if any man hear my voice, and open the door, I will come in to him, and will sup with him, and he with me” (Rev 3:20). It is evident that when the Lord returns He will speak and utter His words, and […]

Editor's Notes: Most Christians maintain that, as pastors and elders have believed in the Lord for many years and have worked very hard for Him, the Lord will first give revelation to them when He returns, and that as long as they follow pastors and elders, they will be able to welcome the Lord. Christian […]