It has been over two thousand years to date since the Lord Jesus Christ came to the earth and was nailed to the cross in the likeness of sinful flesh to serve as a sin offering for us all. The Lord Jesus Christ’s disposition of love, mercy and forbearance is far beyond the reach of us corrupt humans. Therefore, His name was spread and praised and has become known to all, and many people have belief in and reverence for Him. Believers call Him “the lovable Savior Christ.” Then, why is the Lord Jesus called Christ? To understand this question, we should first know what Christ is. 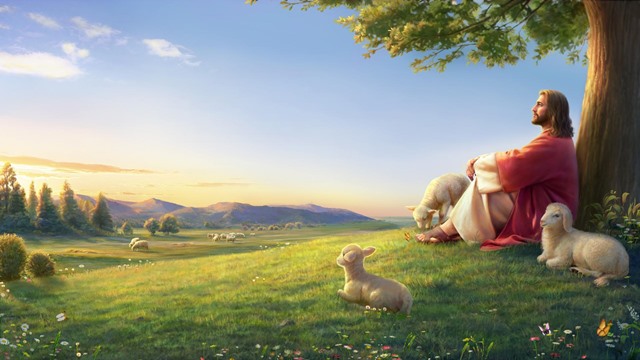 God says: “The incarnate God is called Christ, and Christ is the flesh donned by the Spirit of God. This flesh is unlike any man that is of the flesh. This difference is because Christ is not of flesh and blood; He is the incarnation of the Spirit. He has both a normal humanity and a complete divinity. His divinity is not possessed by any man. His normal humanity sustains all His normal activities in the flesh, while His divinity carries out the work of God Himself.” From God’s words, we know that Christ is the incarnate flesh of the Spirit of God. This flesh is God’s own flesh, like the Lord Jesus. From His appearance alone, the Lord Jesus was no different from any ordinary person. He had parents, brothers and sisters, and was possessed of normal emotions. However, He possessed the divine essence which we humans don’t possess. His divine essence was expressed through His word and work. Thereby, the Lord Jesus is called Christ. Through studying the Bible, we can confirm why it is said that the Lord Jesus has divine substance from the following aspects.

At the end of the Age of Law, people committed more and more sins, and they were increasingly unable to keep the laws. They faced the risk of being condemned and put to death because of their violating the laws. In order to redeem corrupt mankind, God became flesh and came to earth. When He began spreading the way of repentance, the Age of Grace officially started. The Lord Jesus worked for three and a half years. At last, He was nailed to the cross in the likeness of sinful flesh, redeeming all mankind from sin. From then on, those who accept the Lord Jesus Christ are no longer constrained or condemned by the strictures of the law. After they commit sins, they can directly pray to the Lord, confess and repent their sins to the Lord, and thus their sins will be pardoned by Him. This work could only be done by the Lord Jesus Christ, and no man can do it.

2. The Lord Jesus Christ could express the truth and supply life.

God says: “God become flesh is called Christ, and so the Christ that can give people the truth is called God. There is nothing excessive about this.” From the words of God, we can see this: Christ is God’s incarnate flesh, and can surely express the truth.

As we know, after the Lord Jesus was baptized, He overcame the temptations of the devil. After He began to perform His ministry, He performed many signs and wonders, and expressed many truths. He spoke many words, in which there were words of admonitions, words of His requirements of man, and words of many prophecies and promises. From them, we have felt that all the words of the Lord Jesus are the truth, and have authority and power, and that they are God’s utterances to all mankind, are the voice of God! When He spread the way of repentance, He expressed words at any time and in any place according to man’s needs. For example, the Lord Jesus Christ required us: “You shall love the Lord your God with all your heart, and with all your soul, and with all your mind. This is the first and great commandment. And the second is like to it, You shall love your neighbor as yourself” (Matthew 22:37-39); “But let your communication be, Yes, yes; No, no: for whatever is more than these comes of evil” (Matthew 5:37); “Then came Peter to him, and said, Lord, how oft shall my brother sin against me, and I forgive him? till seven times? Jesus said to him, I say not to you, Until seven times: but, Until seventy times seven” (Matthew 18:21-22). All these words are the ways that the Lord Jesus pointed out for us to walk, allowing us to know how to act in order to be in harmony with God’s will and gain His salvation. Just as the Lord Jesus Christ said: “I am the way, the truth, and the life: no man comes to the Father, but by me” (John 14:6).

3. The disposition expressed by the Lord Jesus Christ is that of the Creator.

The Lord Jesus Christ displayed signs and wonders in Judea. He healed the sick and cast out demons for people, and also bestowed His bountiful grace upon people. In order to behold signs and wonders, thus broadening their horizons, and to receive some grace from the Lord, five thousand people went to where the Lord Jesus was. He knew they were not the ones who truly followed Him, but He still exhibited the sign—feeding five thousand people with five loaves of bread and two fish, thus opening their eyes. And when the Lord Jesus Christ was nailed to the cross, He said: “Father, forgive them; for they know not what they do” (Luke 23:34). He also taught us: “But I say to you, Love your enemies, bless them that curse you, do good to them that hate you, and pray for them which spitefully use you, and persecute you; That you may be the children of your Father which is in heaven: for he makes his sun to rise on the evil and on the good, and sends rain on the just and on the unjust” (Matthew 5:44-45). From these we see that the Lord showed mercy to mankind, cared for them and allowed all people to receive some of His grace. The Lord Jesus Christ revealed His love and compassion to us humans in each and every detail of His utterances and work. His attitude toward us corrupt mankind makes us see God’s mercy, love, patience, tolerance and forgiveness, which are worthy of being extolled by us humans.

The Lord Jesus Christ not only showed mercy to people, but also revealed His majesty and wrath, which are His inherent disposition—the righteous disposition of intolerance of people’s offenses. As for those Pharisees who tried to block His will from being carried out, and blasphemed against the work of the Holy Spirit, the Lord rebuked, condemned and cursed them. He said: “And whoever speaks a word against the Son of man, it shall be forgiven him: but whoever speaks against the Holy Ghost, it shall not be forgiven him, neither in this world, neither in the world to come” (Matthew 12:32); “But woe to you, scribes and Pharisees, hypocrites! for you shut up the kingdom of heaven against men: for you neither go in yourselves, neither suffer you them that are entering to go in” (Matthew 23:13). From the work of the Lord, we see that the dispositions He revealed are not only mercy and love, but also righteousness and majesty, and that His dispositions are vivid. Christ is the embodiment of the Spirit of God, and what He expresses at all times and places is His inherent disposition. It is just as God says: “Christ is not merely the manifestation of God on earth, but also the particular flesh assumed by God as He carries out and completes His work among man. This flesh cannot be supplanted by just any man, but is a flesh that can adequately bear God’s work on earth, and express the disposition of God, and well represent God, and provide man with life.”

From the Lord Jesus’ work and word, as well as the dispositions He expressed, we can know the Lord Jesus was the embodiment of the Spirit of God, and the appearance of Christ. He appeared to be a normal and practical man from the outside, but what He said and did is the expression of the inherent substance of God. Therefore, it is not difficult to understand the reason the Lord Jesus is called Christ.

Read more on our The Gospel of Jesus Christ page, or click on the related articles below:

• What Is the Significance of the Baptism of the Lord Jesus?

» Recommended for You: “The Mystery of Godliness: The Sequel” Clip: How to Understand God Incarnate

Each of our brothers and sisters who believes in the Lord Jesus knows that the Lord Jesus did the work of redeeming humanity in the Age of Grace. He not only bestowed compassion and tolerance upon us, teaching us to be tolerant and patient and to repent and confess, but also manifested many miracles, such […]

Dear Sister Xinyi, Hello! Through our last fellowship I have gained a lot. Recently, I have got some different understandings through studying the Bible. So I’m writing to communicate with you about them. I remember that during our last communication, when talking about the topic of what dispositions God has we can know from the […]