Home » The Gospel of Christ » Knowing Jesus Christ » What Is the Significance of the Baptism of the Lord Jesus?

We Christians will be baptized when beginning to believe in the Lord. Though baptism is merely a ceremony, it represents that we officially return to the Lord Jesus, becoming a Christian. So baptism is an important matter for us believers. In Matthew 3:13–17 it says: “Then comes Jesus from Galilee to Jordan to John, to be baptized of him. But John forbade him, saying, I have need to be baptized of you, and come you to me? And Jesus answering said to him, Suffer it to be so now: for thus it becomes us to fulfill all righteousness. Then he suffered him. And Jesus, when he was baptized, went up straightway out of the water: and, see, the heavens were opened to him, and he saw the Spirit of God descending like a dove, and lighting on him: And see a voice from heaven, saying, This is my beloved Son, in whom I am well pleased.” From the Scripture, we know that the Lord Jesus was baptized in Jordan. But what’s the significance of His baptism?

The word of God says: “At the beginning, when Jesus had yet to officially perform His ministry, like the disciples that followed Him, sometimes He also attended meetings, and sang hymns, gave praise, and read the Old Testament in the temple. After He was baptized and came up, the Spirit officially descended upon Him and began to work, revealing His identity and the ministry that He was to undertake. Prior to this, no one knew His identity, and apart from Mary, not even John knew. Jesus was 29 when He was baptized. After His baptism was completed, the heavens were opened, and a voice said: ‘This is My beloved Son, in whom I am well pleased.’ … It was not right after the baptism of Jesus, which was also when the Holy Spirit officially began His work, that the Holy Spirit descended upon Him. The saying that the Holy Spirit descended like a dove upon Him is in reference to the official start of His ministry. The Spirit of God had been within Him before, but He had not begun to work, for the time had not arrived, and the Spirit did not start work rashly. The Spirit bore testimony to Him through baptism. When He came up out of the water, the Spirit began to officially work in Him, which signified that God’s incarnate flesh had begun to fulfill His ministry, and had begun the work of redemption, that is, the Age of Grace had officially started.”

In addition, we can see that God incarnate was ordinary, normal, and not supernatural; He was humble and hidden and never showed Himself off. Before His baptism, the Lord Jesus had grown up as a normal person, learning and widening His knowledge in normal humanity; there was nothing supernatural about Him. In the meantime, the Holy Spirit raised up John to bring out among the Jews those who longed for the gospel of the kingdom of heaven and looked forward to the arrival of the Savior. God used John to pave and prepare the way for the Lord Jesus’ later work and preaching. When God’s time came, the Holy Spirit bore testimony to the Lord Jesus through baptism and then officially began to work in Him. Then the Lord Jesus began to fulfill His ministry, expressing the truth and doing the work of redemption. So there is extraordinary significance in the Lord Jesus’ baptism.

During the Plague, How Should We Christians Attend Meetings to Worship God?
Join Our Online Meeting

» You may be interested in reading more on our The Gospel of Jesus Christ page, or in the articles below:

• Is Baptism a Necessary Condition for Entering the Heavenly Kingdom

• What Is the Meaning of the Lord Jesus Being Tempted? 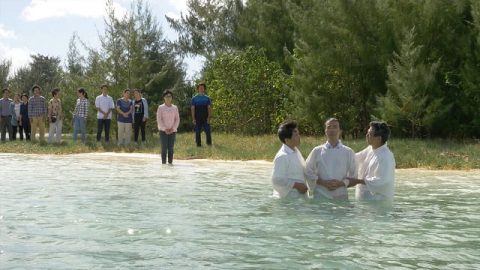 What Is the Moral of the Parable of New Cloth on an Old Coat?

Can People Enter Into the Heavenly Kingdom Through Baptism?

Are the Attributes of Jesus Christ Only Merciful and Loving?
Jesus Christ bestowed abundant grace upon man and what He expressed was the attribute of mercy and love. From the Lord Jesus’ preaching and work, we know that God is not only merciful and loving and that He is also ...

Why Did Jesus Use Parables When He Did His Work?
When the Lord Jesus worked, He said many words to the people at that time. Some of them are very straightforward. For example, the Lord Jesus often sa…