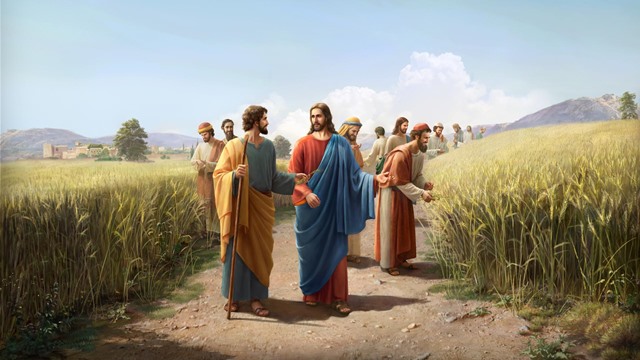 Later, on a website I saw these words, “The first one is the parable of the sower. This is a really interesting parable; sowing seeds is a common event in people’s lives. The second is the parable of the tares. As far as what tares are, anyone who has planted crops and adults will know. The third is the parable of the mustard seed. All of you know what mustard is, right? If you don’t know, you can have a look through the Bible. For the fourth one, the parable of the leaven, most people know that leaven is used for fermentation; it’s something that people use in their daily lives. All of the parables below, including the sixth, the parable of the treasure, the seventh, the parable of the pearl, and the eighth, the parable of the net, are all drawn from people’s lives; they all come from people’s real lives. What kind of picture do these parables paint? This is a picture of God becoming a normal person and living alongside mankind, using the language of a normal life, using human language to communicate with humans and to provide them with what they need. When God became flesh and lived among mankind for a long time, after He had experienced and witnessed people’s various lifestyles, these experiences became His textbook for transforming His divine language into human language. Of course, these things that He saw and heard in life also enriched the Son of man’s human experience. When He wanted to get people to understand some truths, to get them to understand some of God’s will, He could use parables similar to the ones above to tell people about God’s will and His requirements of mankind. These parables were all related to people’s lives; there was not a single one that was out of touch with human lives. When the Lord Jesus lived with mankind, He saw farmers tending their fields, He knew what tares were and what leavening was; He understood that humans like treasure, so He used the metaphors of both the treasure and the pearl.” “This was the advantage of God becoming flesh: He could take advantage of mankind’s knowledge and use human language to speak to people, to express His will. He explained or ‘translated’ to man His profound, divine language that people struggled to understand in human language, in a human way. This helped people understand His will and know what He wanted to do.”

From these words I understood that the reason the Lord Jesus said many parables when He worked was to allow His followers to better understand God’s intentions and His different requirements of people so that they would worship Him with heart and honesty. In the Age of Law, Jehovah God used prophets to release His words to man, but those words were all prophecies and the followers at that time were unable to directly understand the meaning of them. Even today, we are still incapable of figuring out clearly many prophecies of the prophets. This is the truth. When the Lord Jesus was incarnated as the Son of man to work on earth and used human language to tell people the intentions and requirements of God, we could better understand and grasp the truth in His words and it helped us know His work and disposition and understand all the pain and effort of His salvation of mankind. Just as the Lord Jesus used the parable of the lost sheep to express His love for mankind—God wants every person to be saved, and does not want anyone to perish. As long as one is a true believer, even if he goes the wrong path temporarily, God will strive to rescue him. This fulfills the words in the Bible, “That it might be fulfilled which was spoken by the prophet, saying, I will open my mouth in parables; I will utter things which have been kept secret from the foundation of the world” (Matthew 13:35). This is the second aspect of significance of why the Lord Jesus said parables when He worked.

I went on reading, “He could also have conversations with people from the human perspective, using human language, and communicate with people in a way they understood. He could even speak and work using human language and knowledge so that people could feel God’s kindness and closeness, so that they could see His heart.” From these words I understood that when the Lord Jesus was working and preaching, He spoke the parables using human language, for they are easy to understand and they could even more allow us to feel God’s kindness and loveliness and bring us closer to Him. Think back to the Age of Law. When God didn’t become flesh to do His work, He spoke to Moses in the flame; He spoke to the Israelites on Mount Sinai; He spoke to Job in the wind. At that time when people heard God speaking, they felt fearful and dared not to confront Him or get close to Him, much less quieted their hearts to seek the meaning of His words. However, in the Age of Grace, God incarnate used human language to do His work and preach, teaching people to understand His way by parables, which allowed us to feel that God is no longer unapproachable to us or the One who let us stand in awe, and to feel God’s consideration and kindness to us so that we can face-to-face seek His intentions, accept His work and leading, and get His redemption. This is the third aspect of significance of why the Lord Jesus spoke parables when He worked.

From God’s work we can see that God became flesh to express truth and used human language to speak to us mankind for the purpose that we can more easily know His intentions and requirements and understand and practice the truth, and thus we can cast off our corrupt disposition, be cleansed and changed, and become the ones who know God, obey God, and worship God. Thank God. All the Glory be to God!

» Read more on our The Parables of Jesus page, or click on the related articles below:

The Parables of Jesus
Previous Is the Theory of the Trinity in Line With the Lord’s Word?
Next What Are the Lord’s Intentions Behind the Parable of the Shepherd Seeking the Lost Sheep?

With a Bible in his hands, the preacher Liu Qing said, “Brothers and sisters, let’s read the parable of the lost sheep.” They all nodded and began to read. “How think you? if a man have an hundred sheep, and one of them be gone astray, does he not leave the ninety and nine, and […]

It has been over two thousand years to date since the Lord Jesus Christ came to the earth and was nailed to the cross in the likeness of sinful flesh to serve as a sin offering for us all. The Lord Jesus Christ’s disposition of love, mercy and forbearance is far beyond the reach of […]