When we talk about the Father, the Son, and the Holy Spirit, many brothers and sisters say They are the three persons of God. As for what the relationship is between Them, are They the Trinity of one God, or are They three persons of God? You can say that They are three persons, but there is just one true God. You can say that They’re one God, but there is a record in the Bible of there being the Father, the Son, and the Holy Spirit. So what does that mean? Whether they are biblical scholars or preachers, no one can clearly explain the meaning of the Trinity. This has become an unsolvable riddle for many Christians. 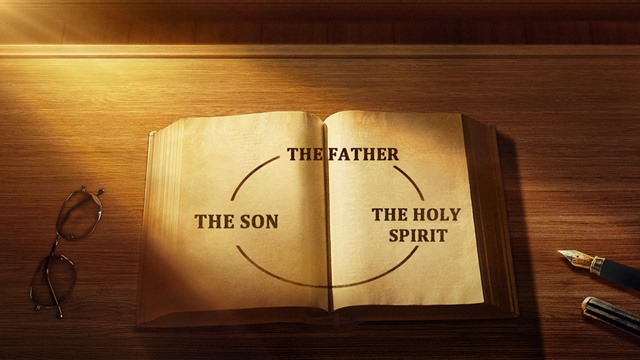 In order to gain some clarity on this issue, we must first know how the term the Trinity came to be. We know that the term never appeared in the Bible, and that it was created on earth after the Lord Jesus became flesh. Then the terms the Father and the Son came about, so people at the time came to believe from this that in addition to the Lord Jesus, there was also God the Father in heaven. After the Lord Jesus was resurrected and returned to heaven, people later extrapolated from what was written in a number of places in the Scriptures that there was a Trinity, but there were also quite a few people who were suspicious of this. Some believed that God is the one and only true God while some believed that God is the God of the Trinity: the Father, the Son, and the Holy Spirit. Based on what is written, in the more than three hundred years after the Lord, in the First Council of Nicaea, there was a debate over the oneness of God versus the multiplicity of God, and in the end they came up with the term for God of the Trinity. This term has continued on since that day. At this point in our fellowship we need to understand the term the Trinity didn’t originally exist for God, but it was something that human beings extrapolated based on the idea of the Father and the Son and other things written in the Bible.

Since the Father and the Son were originally one why did the Lord Jesus call God in heaven Father when He prayed? I read this explanation of this question in a book: “Do you still remember the Lord’s Prayer that Jesus taught you to memorize? ‘Our Father in heaven….’ He asked all man to call God in heaven by the name of Father. And since He too called Him Father, He did so from the perspective of one who stands on an equal footing with you all. Since you called God in heaven by the name of Father, this shows that Jesus saw Himself to be on equal footing with you, and as a man on earth chosen by God (that is, the Son of God). If you call God Father, is this not because you are a created being? However great the authority of Jesus on earth, prior to the crucifixion, He was merely a Son of man, governed by the Holy Spirit (that is, God), and one of the earth’s created beings, for He had yet to complete His work. Therefore, His calling God in heaven Father was solely His humility and obedience. His addressing God (that is, the Spirit in heaven) in such a manner, however, does not prove that He was the Son of the Spirit of God in heaven. Rather, it was simply that His perspective was different, not that He was a different person. The existence of distinct persons is a fallacy! Prior to His crucifixion, Jesus was a Son of man bound by the limitations of the flesh, and He did not fully possess the authority of the Spirit. That is why He could only seek the will of God the Father from the perspective of a created being. It is as He thrice prayed in Gethsemane: ‘Not as I will, but as You will.’ Before He was laid on the cross, He was but the King of the Jews; He was Christ, the Son of man, and not a body of glory. That is why, from the standpoint of a created being, He called God Father. Now, you cannot say that all who call God Father are the Son. If this were so, then would you not have all become the Son once Jesus taught you the Lord’s Prayer? If you are still not convinced, then tell Me, who is the one that you call Father? If you are referring to Jesus, then who is the Father of Jesus to you? After Jesus went away, this idea of the Father and the Son was no more. This idea was only appropriate for the years when Jesus became flesh; under all other circumstances, the relationship is one between the Lord of creation and a created being when you call God Father. There is no time at which this idea of the Trinity of Father, Son, and Holy Spirit can stand; it is a fallacy rarely seen through the ages and it does not exist!” We can see from this that the Lord Jesus is God Himself in the flesh, that He is God’s Spirit realized in the flesh, the Son of man, and Christ. When the Lord Jesus prayed to God in heaven as the Father, He was doing this from the perspective of one of creation, thus embodying the Lord Jesus Christ’s humility and obedience. It does not at all prove that the Lord Jesus was the Son of the Spirit of God in heaven. The Lord Jesus calling God in heaven Father was only restricted to the time of His work while incarnated, and after the work of the Lord Jesus was completed, the terms Father and Son were no longer necessary.

I read a couple of other things on this: “There is only one God, only one person in this God, and only one Spirit of God, much as it is written down in the Bible that ‘There is only one Holy Spirit and only one God.’ Regardless of whether the Father and the Son of which you speak exist, there is only one God after all, and the essence of the Father, the Son, and the Holy Spirit you believe in is the essence of the Holy Spirit. In other words, God is a Spirit, but He is able to become flesh and live among men, as well as to be above all things. His Spirit is all-inclusive and omnipresent. He can simultaneously be in the flesh and in and above the universe. Since all people say that God is the only one true God, then there is a single God, divisible at will by none! God is only one Spirit, and only one person; and that is the Spirit of God.” “From the time of creation until now, this work has been carried out by the Spirit of God Himself. Be it the work in the heavens or in the flesh, all is carried out by His own Spirit. All creatures, whether in heaven or on earth, are in the palm of His almighty hand; all of this is the work of God Himself and can be done by no other in His stead. In the heavens, He is the Spirit but also God Himself; among men, He is flesh but remains God Himself. Though He may be called by hundreds of thousands of names, He is still Himself, and all the work is the direct expression of His Spirit. The redemption of all mankind through His crucifixion was the direct work of His Spirit, and so too is the proclamation unto all nations and all lands during the last days. At all times, God can only be called the almighty and one true God, the all-inclusive God Himself. The distinct persons do not exist, much less this idea of the Father, the Son, and the Holy Spirit. There is only one God in heaven and on earth!” (“Does the Trinity Exist?”).

Through these words we can see that there is only one God and there is only one Spirit of God. God is the one true God and is not divided between different persons. Whether it’s God’s work in the Spirit or His work in the flesh, from beginning to end it is and always has been one Spirit doing the work. It is all the work of the Holy Spirit. So, whether it was the Lord Jesus’ work before His crucifixion or after His resurrection, it was all the work and the expression of the Holy Spirit. No matter what stage of work it is, it is the work of God Himself. In sum, there is only one God in heaven and earth. No matter when, God is the one and only true God! We can see from this that the Trinity is a term that came from human ideas and does not align with the Lord’s words, nor is there any basis for it in God’s words. Now we know that the Trinity is a term that does not hold water.

You may be interested in reading more on our The Trinity page, or in the articles below:

• Does the Trinity Exist?

• Exploring the Mystery of the Trinity, I Understood the Father and Son Relationship

• Understand the Trinity and the Relationship Between the Father, the Son, and the Holy Spirit

Recommended for You: Gospel Movie “Exploration of the ‘Trinity'” Clip: The Father and the Son Are One?

Previous Are the Attributes of Jesus Christ Only Merciful and Loving?
Next Why Did Jesus Use Parables When He Did His Work?

In the parable of the shepherd seeking the lost sheep told by the Lord Jesus in the Bible, we can see God’s mercy and love to mankind. However, do you know the hidden meaning of these words in the parable “Even so it is not the will of your Father which is in heaven, that one of these little ones should perish”?

Whenever reading these lines of Scripture: “How think you? if a man have an hundred sheep, and one of them be gone astray, does he not leave the ninet…

When the Lord Jesus worked, He said many words to the people at that time. Some of them are very straightforward. For example, the Lord Jesus often sa…

The parable of the lost sheep conveys the heavenly Father’s love and concern for mankind. Then do you know the deep meaning of this parable made by the Lord Jesus?"