The Lord Jesus said, “How think you? if a man have an hundred sheep, and one of them be gone astray, does he not leave the ninety and nine, and goes into the mountains, and seeks that which is gone astray? And if so be that he find it, truly I say to you, he rejoices more of that sheep, than of the ninety and nine which went not astray. Even so it is not the will of your Father which is in heaven, that one of these little ones should perish” (Matthew 18:12-14). As I read these words of the Lord and pondered the parable He spoke, I deeply appreciated God’s sincerity in saving us mankind. Not having the heart to see us humans, who have been deeply corrupted by Satan, living in sin and suffering the trickery and affliction of Satan, the Lord hopes that we can all return before God and gain His salvation, and He is pleased and joyful for our turning back from the wrong path. Meanwhile, I also saw how God values us humans. If one of us becomes lost and depraved because of Satan’s temptations or deception and goes far astray from Him, God will be beset with sorrow, and He will do whatever He can to save us. The attitude in which He treats us is akin to how we treat the lost sheep—as long as there is a chance, He won’t give up on us easily. The parable of the lost sheep spoken by the Lord fully exhibits God’s earnest intention in saving us and how sincere His love and salvation for us is. Therefore, in the course of following God, no matter what trials or refinements, or even persecution and tribulations come to us, we should look up to and rely on God, seek to understand His will and see through Satan’s schemes. We cannot be passive and weak, much less misunderstand, complain against or even betray God. Even if we may go off track a little bit, we shouldn’t give in to despair. As long as we sincerely pray to God to confess our sins and repent, God’s smile will be revealed to us. 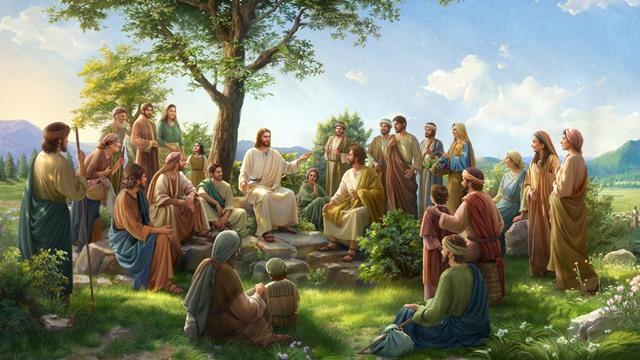 When reading these verses, I also noticed that after telling the parable, the Lord Jesus added, “Even so it is not the will of your Father which is in heaven, that one of these little ones should perish.” Then I got confused: We all know that the Lord Jesus is the incarnate God Himself, and that His word is God’s word. So why didn’t He just say “This is My will, and My will is God’s will”? What is His intention behind this line?

After reading this passage of words, I suddenly realized: The reason why the Lord Jesus said “Even so it is not the will of your Father which is in heaven, that one of these little ones should perish” was because people of that time only admitted God in heaven, and denied the incarnate Lord Jesus as God Himself. Even in the eyes of those who followed Him, the Lord was just the Son of man sent by the Father in heaven, so they were skeptical of His words and couldn’t fully accept them. The Lord Jesus sympathized with men’s weakness and thus added the line “Even so it is not the will of your Father which is in heaven…,” which was for people to accept what He said more easily. By doing so, He intended for those who followed Him to believe in His words without doubt, so that His working and speaking could bear fruit. From this line which we would often ignore, I truly appreciated the Lord Jesus’ earnest intentions behind His words as well as God’s sincere love and care for us mankind. No matter how people at that time treated Him, as long as they could listen to God’s words, practice in accordance with God’s teachings and gain His salvation, the Lord’s heart would be comforted. At the same time, I also saw the Lord Jesus’ humility and hiddenness. He never showed off Himself or spoke in a condescending manner, nor did He ever force men to listen to Him. He just taught them to listen to God’s words and accept God’s redemptive work, so that they could be forgiven of their sins and escape from the danger of being condemned to death for breaking the law. These words of the Lord fully show God’s selfless love for us mankind as well as His sincere desire to save us, from which I also gained an insight into His understanding of men’s foolishness and ignorance: Though people who followed Him at that time didn’t treat Him as God, He never made an issue of it, because He examined the innermost heart of men and knew their stature and what they lacked. He just spoke to supply and lead people according to their lack and needs, so that they could understand God’s sincerity in saving them and have more faith to follow Him.

Having tasted the Lord Jesus’ selfless love for us mankind, I couldn’t help but offer my sincere thanks and praise to God.

» You may be interested in reading more on our The Gospel of Jesus Christ page about Knowing Jesus Christ, or by clicking on the articles below:

• True Meaning of Jesus Saying “It Is Finished” on the Cross

Commentaries on Matthew The love of God The Parable of the Lost Sheep The Parables of Jesus
Previous What Is the Significance of the Baptism of the Lord Jesus?
Next Are the Attributes of Jesus Christ Only Merciful and Loving?

Hello Sister Wang, In your letter you mention: “I think that when the Lord Jesus said ‘It is finished’ moments before He took His last breath, it meant that the work of salvation had been done and that we have been saved by God and that God won’t do any new work. …” Regarding this […]

Dear Sister Xinyi, Hello! Through our last fellowship I have gained a lot. Recently, I have got some different understandings through studying the Bible. So I’m writing to communicate with you about them. I remember that during our last communication, when talking about the topic of what dispositions God has we can know from the […]