Home » The Gospel of Christ » Knowing Jesus Christ » Jesus Appeared to Thomas: What Is the Significance

As we all know, in the Bible there are the following scriptures: “And after eight days again his disciples were within, and Thomas with them: then came Jesus, the doors being shut, and stood in the middle, and said, Peace be to you. Then said he to Thomas, Reach here your finger, and behold my hands; and reach here your hand, and thrust it into my side: and be not faithless, but believing. And Thomas answered and said to him, My LORD and my God. Jesus said to him, Thomas, because you have seen me, you have believed: blessed are they that have not seen, and yet have believed” (John 20:26-29).

Whenever I read these scriptures, I always think: The scriptures record that the Lord Jesus appeared to His disciples after the doors were shut, saying “Peace be to you!” That is to say, the Lord Jesus at that time was no longer a flesh but a spiritual body, for only the spiritual body is not subject to space and geographical constraints, entering into and going out of the house with the doors closed, appearing and disappearing at any time, with transcendent power. However, I wonder all the time, “Now that the Lord Jesus, after the resurrection, has finished the work He undertook, why is it necessary for Him to return to the people’s midst in His original image, appearing to His disciples or talking to Thomas?” Not until I have read God’s words did I have a brand-new understanding and knowledge of the intention of the Lord Jesus’ appearance to His disciple Thomas after the resurrection.

God’s word says: “When He came to Thomas, He let doubting Thomas touch His hand, and told him: ‘reach here your hand, and thrust it into my side: and be not faithless, but believing.’ These words, these actions weren’t things that the Lord Jesus wanted to say and do only after He had been resurrected, but they were things He wanted to do before He had been nailed to the cross. It is evident that the Lord Jesus who had not yet been nailed to the cross already had an understanding of people such as Thomas. So what can we see from this? He was still the same Lord Jesus after His resurrection. His essence had not changed. Thomas’ doubts had not just started but had been with him the entire time he had been following the Lord Jesus, but He was the Lord Jesus that had been resurrected from the dead and had returned from the spiritual world with His original image, with His original disposition, and with His understanding of mankind from His time in the flesh, so He went to find Thomas first, to let Thomas touch His rib, to let him not only see His spiritual body after resurrection, but to let him touch and feel the existence of His spiritual body, and completely let go of his doubts. Before the Lord Jesus was nailed to the cross, Thomas always doubted that He is Christ, and could not believe it. His belief in God was established only on the basis of what he could see with his own eyes, what he could touch with his own hands. The Lord Jesus had a good understanding of the faith of this type of person. They only believed in God in heaven, and did not believe at all, and would not accept the One sent by God, or the Christ in the flesh. In order to have him acknowledge and believe in the existence of the Lord Jesus and that He truly was God incarnate, He allowed Thomas to reach out his hand and touch His rib. Was Thomas’ doubting any different before and after the Lord Jesus’ resurrection? He was always doubting, and aside from the Lord Jesus’ spiritual body personally appearing to him and allowing Thomas to touch the nail marks on His body, no one could resolve his doubts, and no one could make him let go of them. So, from the time the Lord Jesus allowed him to touch His rib and let him really feel the existence of the nail marks, Thomas’ doubt disappeared, and he truly knew that the Lord Jesus had been resurrected and he acknowledged and believed that the Lord Jesus was the true Christ, that He was God incarnate. Although at this time Thomas no longer doubted, he had lost forever the chance to meet with Christ. He had lost forever the chance to be together with Him, to follow Him, to know Him. He had lost the chance for Christ to perfect him. The Lord Jesus’ appearance and His words provided a conclusion, and a verdict on the faith of those who were full of doubts. He used His actual words and actions to tell the doubters, to tell those who only believed in God in heaven but did not believe in Christ: God did not commend their belief, nor did He commend their following which was full of doubts. The day they fully believed in God and Christ could only be the day that God completed His great work. Of course, that day was also the day that their doubt received a verdict. Their attitude toward Christ determined their fate, and their stubborn doubt meant their faith gained them no results, and their rigidness meant their hopes were in vain. Because their belief in God in heaven was fed on illusions, and their doubt toward Christ was actually their true attitude toward God, even though they touched the nail marks on the Lord Jesus’ body, their faith was still useless and their outcome can only be described as beating the wind—in vain. What the Lord Jesus said to Thomas was also very clearly telling every person: The resurrected Lord Jesus is the Lord Jesus that had initially spent thirty-three and a half years working among mankind. Although He had been nailed to the cross and experienced the valley of the shadow of death, and He had experienced resurrection, His every aspect had undergone no changes. Although He now had nail marks on His body, and although He had been resurrected and walked out from the grave, His disposition, His understanding of mankind, and His intentions toward mankind had not changed in the slightest. Also, He was telling people that He had come down off the cross, triumphed over sin, triumphed over hardships, and triumphed over death. The nail marks were just the evidence of His victory over Satan, evidence of being a sin offering to successfully redeem all of mankind. He was telling people that He had already taken on mankind’s sins and He had completed His work of redemption. When He returned to see His disciples, He told them with His appearance: ‘I’m still alive, I still exist; today I am truly standing in front of you so that you can see and touch Me. I will always be with you.’ The Lord Jesus also wanted to use the case of Thomas as a warning for future people: Although you believe in the Lord Jesus, you can neither see nor touch Him, however, you can be blessed by your true faith, and you can see the Lord Jesus through your true faith; this kind of person is blessed.”

God’s word allowed me to understand that as for those such as Thomas who believe in God without having faith in God’s almightiness and sovereignty and His incarnation, God is not only incapable of approving of their so-called belief and following, but instead will condemn and pronounce a judgment on them due to their doubt and attitude toward Christ. Consequently, they will forever lose the opportunity of following, knowing Christ, and being saved and perfected by Christ. Simultaneously, God has given us an admonishment as well as a warning through the matter of Thomas. That is: No matter in what sort of ways God will appear, work and speak, people should possess true belief in Him. If people, like Thomas, doubt and deny God while believing in Him, they will surely be forsaken by God and sink into the darkness. Only if one acts as a pure and honest person, and truly trusts and follows God without any doubts and suspicions can he be commended and blessed by God.

» Further reading about The Resurrection of Jesus Christ:

• Lessons From the Lord Jesus’ Appearance to Thomas the Apostle 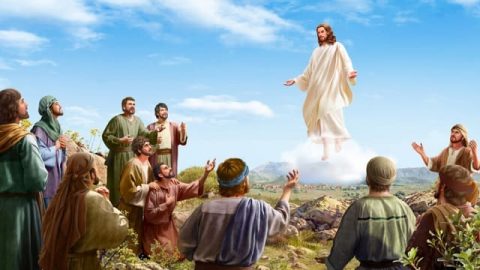 The Significance of Christ's Resurrection – Reflection on Matthew 28:18
Today’s Gospel And Jesus came and spoke to them, saying, All power is given to me in heaven and in earth. - Matthew 28:18 Reflection After Jesus’ resu… 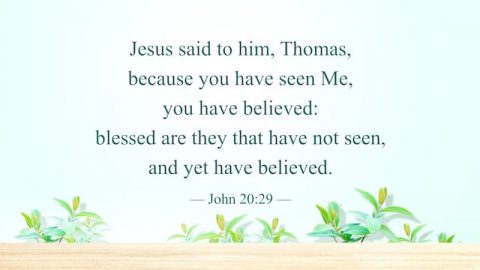 Blessed Are Those Who Have Not Seen and yet Believe – Reflection on John 20:29
Today’s Gospel Jesus said to him, Thomas, because you have seen me, you have believed: blessed are they that have not seen, and yet have believed. – J…