Many brothers and sisters in the Lord all feel confused: In the Age of Law, Jehovah God did His work and led the Israelites in Spirit, so why must God become flesh to work and save man in the Age of Grace? Couldn’t He do that work in a spiritual body? 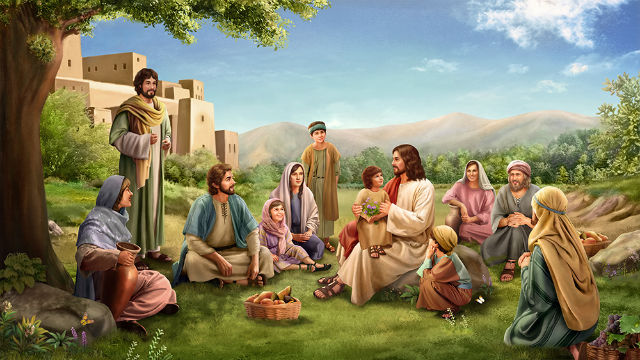 On this question, I’ll share a bit of my understanding. As a matter of fact, every stage of God’s work is done based on the needs of corrupt mankind and also according to the steps of God’s plan of managing mankind. In the Age of Law, because mankind was minimally corrupted, what they needed was not God’s work of redemption. They only needed God to promulgate laws and commandments so that they could be aware of their sins and know how to worship God and how to live on earth. At that time, as long as mankind obeyed the laws and commandments, they could receive God’s care, protection, blessings, and grace. Therefore, in the Age of Law, God didn’t need to incarnate Himself to do His work.

At the end of the Age of Law, however, since mankind had become more and more corrupt, they couldn’t uphold the law anymore. After sinning, they had no adequate sacrifices to offer and so they made inferior offerings to Jehovah God. Everyone was facing the danger of being put to death according to the law. Thus, in order to save mankind from being condemned by the law, God personally became flesh and was crucified for mankind to redeem them from the clutches of Satan, so that man would no longer be executed by the law because of sinning.

So why didn’t God perform the redemption work in the Spirit? It is because God is Spirit, formless and amorphous, so if He doesn’t become flesh, He can’t be nailed to the cross and can’t be mankind’s sin offering. Just as Jehovah God said to Moses: “You can not see my face: for there shall no man see me, and live” (Exodus 33:20). The corrupt mankind can’t come into direct contact with God’s Spirit. If man were to come into contact with God’s Spirit, they would be smitten by God. If so, how could God redeem mankind? Moreover, since man can’t see God’s Spirit, he can only use his brain to imagine what kind of God God is, what disposition He has, and what His essence is. However, such understanding is not practical or precise. Besides, if God’s Spirit worked on man, giving man enlightenment, illumination, moving, and guidance, this would give man a sense of the mysterious and the unimaginable. So it wouldn’t be easy for man who has a mind and has been deeply corrupted by Satan to accurately understand God’s will, so man would feel a sense of estrangement from God. In this way, it would be impossible for God’s redemption work to be effective.

But the work of God in the flesh is different. God incarnate can practically interact with men, live among them, take part in their lives, and support, provide for, and teach them at any time. He can use the language of men to clearly tell mankind His demands, His will, His disposition, and all that He has and is. In this way, without having to cast about and search, men can clearly understand God’s will and know God’s work, so that they have a clear goal and direction and the accurate path of practice for believing in God. For example, we can understand from the Lord Jesus’ words what kind of people can enter into the kingdom of heaven, and that we should forgive others seventy times seven times, love our neighbor as ourselves, and be tolerant and patient to others, etc. From the utterances and work of the incarnate God, we can practically feel God’s love and compassion for mankind. God in the flesh has sympathy for mankind’s weakness and gives sinners chances to repent. As long as man sincerely repents and confesses before God, he can gain God’s pardon and forgiveness without having to give offerings. In this way, man no longer needs to be worried about being put to death according to the law when he sins and has no offering, and can break free from the bondage and shackles of the law. The work of God in the flesh can also reveal which believers have real faith and which believers are hypocritical, and let man know what type of person God likes and what type of person disgusts Him. For instance: The Pharisees were the leaders in the synagogues, and they read the Bible well, strictly followed the regulations of the law, purposely engaged in long prayers, and wrote scriptures on tassels of their garments. The Jewish people all thought they were the people who piously served God and thus imitated and followed them. However, the Lord Jesus revealed the essence and truth of the Pharisees’ hypocrisy, and repeatedly condemned and cursed them, saying “woe to you,” which has given believers in God discernment. All of this is brought by God incarnate, and the work of the Spirit simply cannot achieve this effect.

As God’s word says: “The work that is of greatest value to corrupt man is that which provides accurate words, clear goals to pursue, and which can be seen and touched. Only realistic work and timely guidance are suited to man’s tastes, and only real work can save man from his corrupt and depraved disposition. This can only be achieved by the incarnate God; only the incarnate God can save man from his formerly corrupt and depraved disposition.”

It is now the last days. We humans have been deeply corrupted by Satan and all follow the evil trends of society. Relationships between people are built on the foundation of money and benefits. People have already lost all conscience and reason, and those who have believed in the Lord for many years are no exception. All their actions are according to their own will. They attack and belittle each other for their own fame, fortune, and status. They are arrogant and have no reverence for God, living in the state of committing sins and confessing them. Their sins are more serious than those of the people who lived in the Age of Law and they are more evil and corrupt. Just as the Bible says: “For men shall be lovers of their own selves, covetous, boasters, proud, blasphemers, disobedient to parents, unthankful, unholy, Without natural affection, truce breakers, false accusers, incontinent, fierce, despisers of those that are good, Traitors, heady, high minded, lovers of pleasures more than lovers of God” (2 Timothy 3:2-4). If in the last days, God worked in Spirit to bring the age to an end, then none of us corrupt humans could be saved and we would only be smitten by God and perish. This wasn’t God’s original intention when He made man. His management plan is to save man and bring those who are purified into a new heaven and a new earth. For this reason, God must become flesh again in the last days to work and save mankind, which contains His good intentions for mankind’s salvation.

The Bible says: “I have yet many things to say to you, but you cannot bear them now. However, when he, the Spirit of truth, is come, he will guide you into all truth: for he shall not speak of himself; but whatever he shall hear, that shall he speak: and he will show you things to come” (John 16:12-13). “For as the lightning, that lightens out of the one part under heaven, shines to the other part under heaven; so shall also the Son of man be in his day” (Luke 17:24). “He that has an ear, let him hear what the Spirit says to the churches” (Revelation 2:29). “My sheep hear my voice, and I know them, and they follow me” (John 10:27).

From these prophecies, we can clearly see that when God comes back in the last days, He will come secretly as the Son of man to express the truth and do His work. When it comes to the Son of man, it refers to the incarnate God who is born from a human and has both normal humanity and complete divinity. The Lord Jesus also prophesied that when He returns in the last days, we corrupt mankind will resist and reject Him because we don’t love the truth and don’t know God. Just as the Lord Jesus said: “But first must he suffer many things, and be rejected of this generation” (Luke 17:25). However, for those who love the truth and long for God’s appearance, when they hear the news of the Lord’s return, they will be able to seek and investigate with a God-revering heart. It’s like Peter, John, and other disciples: When the Lord Jesus became flesh to work, they could humbly seek and pay attention to listening to the Lord’s voice. In the end, they followed the Lord and received His salvation. It is hoped that all of us can be someone like Peter and John who humbly seeks, puts aside their own conceptions, and accepts the truth, so that we can recognize God’s voice from His words, follow His footsteps, and receive His salvation of the last days.

• 3 Aspects to Know What Is the Meaning of Jesus Christ

• What’s the Significance of the Lord Becoming Man’s Sin Offering?

Incarnation of God
Previous The New Understanding of the Lord Serving as Our Sin Offering
Next What's the Meaning of Christmas? Know Christmas Day From 5 Points

In the Age of Grace, God incarnated and became the Lord Jesus who came to redeem mankind, and the Jewish Pharisees said that the Lord Jesus was only a man.In the last days...

It’s a big mystery that Jesus works in the flesh as opposed to through the means of His Spirit. 3 aspects to know the significance of the incarnation of Jesus.

We believers in the Lord know the Lord Jesus is Christ, so why is the Lord Jesus called Christ? What is the meaning of Christ? Read this article to learn more.

In the Age of Grace, God was incarnated to do His work and save mankind. What is the significance of the incarnation? Do you know? The fellowship in this article will bring you new light.