Jon 1:1–2 Now the word of Jehovah came to Jonah the son of Amittai, saying, Arise, go to Nineveh, that great city, and cry against it; for their wickedness is come up before Me. 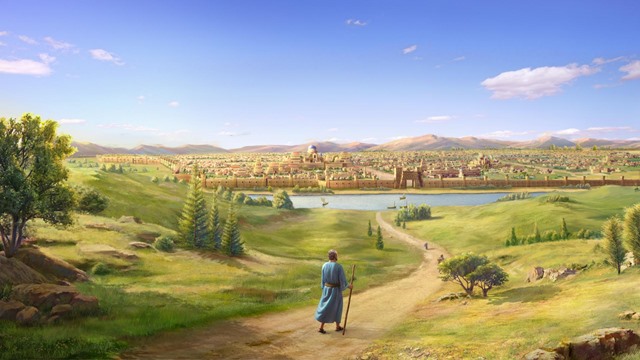 Jon 3 And the word of Jehovah came to Jonah the second time, saying, Arise, go to Nineveh, that great city, and preach to it the preaching that I bid you. So Jonah arose, and went to Nineveh, according to the word of Jehovah. Now Nineveh was an exceeding great city of three days’ journey. And Jonah began to enter into the city a day’s journey, and he cried, and said, Yet forty days, and Nineveh shall be overthrown. So the people of Nineveh believed God, and proclaimed a fast, and put on sackcloth, from the greatest of them even to the least of them. For word came to the king of Nineveh, and he arose from his throne, and he laid his robe from him, and covered him with sackcloth, and sat in ashes. And he caused it to be proclaimed and published through Nineveh by the decree of the king and his nobles, saying, Let neither man nor beast, herd nor flock, taste any thing: let them not feed, nor drink water: But let man and beast be covered with sackcloth, and cry mightily to God: yes, let them turn every one from his evil way, and from the violence that is in their hands. Who can tell if God will turn and repent, and turn away from His fierce anger, that we perish not? And God saw their works, that they turned from their evil way; and God repented of the evil, that He had said that He would do to them; and He did it not.

Jon 4 But it displeased Jonah exceedingly, and he was very angry. And he prayed to Jehovah, and said, I pray You, O Jehovah, was not this my saying, when I was yet in my country? Therefore I fled before to Tarshish: for I knew that You are a gracious God, and merciful, slow to anger, and of great kindness, and repent You of the evil. Therefore now, O Jehovah, take, I beseech You, my life from me; for it is better for me to die than to live. Then said Jehovah, Do you well to be angry? So Jonah went out of the city, and sat on the east side of the city, and there made him a booth, and sat under it in the shadow, till he might see what would become of the city. And Jehovah God prepared a gourd, and made it to come up over Jonah, that it might be a shadow over his head, to deliver him from his grief. So Jonah was exceeding glad of the gourd. But God prepared a worm when the morning rose the next day, and it smote the gourd that it withered. And it came to pass, when the sun did arise, that God prepared a vehement east wind; and the sun beat on the head of Jonah, that he fainted, and wished in himself to die, and said, It is better for me to die than to live. And God said to Jonah, Do you well to be angry for the gourd? And he said, I do well to be angry, even to death. Then said Jehovah, You have had pity on the gourd, for the which you have not labored, neither made it grow; which came up in a night, and perished in a night: And should not I spare Nineveh, that great city, wherein are more than six score thousand persons that cannot discern between their right hand and their left hand; and also much cattle?

Synopsis of the Story of Nineveh

Although the story of “God’s salvation of Nineveh” is brief in length, it allows one to glimpse the other side of God’s righteous disposition. In order to understand exactly what that side consists of, we must return to the Scripture and review one of God’s acts which He carried out in the process of His work.

Let us first look at the beginning of this story: “Now the word of Jehovah came to Jonah the son of Amittai, saying, Arise, go to Nineveh, that great city, and cry against it; for their wickedness is come up before Me” (Jon 1:1–2). In this passage from the scriptures, we know that Jehovah God commanded Jonah to go to the city of Nineveh. Why did He order Jonah to go to this city? The Bible is very clear about this: The wickedness of the people inside this city had come before Jehovah God, and therefore He sent Jonah to proclaim to them what He intended to do. While there is nothing recorded telling us who Jonah was, this is, of course, unrelated to knowing God, and you therefore need not understand this man, Jonah. You need only know what God ordered Jonah to do and what God’s reasons were for doing such a thing.

Let us move on to the second passage, the third chapter of the Book of Jonah: “And Jonah began to enter into the city a day’s journey, and he cried, and said, Yet forty days, and Nineveh shall be overthrown.” These are the words that God directly passed on to Jonah to tell the Ninevites, so of course, these are the words that Jehovah wished to say to the Ninevites. These words tell people that God began to abhor and hate the people of the city because their wickedness had come before His gaze, and so He wished to destroy this city. However, before God destroyed the city, He would make an announcement to the Ninevites, and at the same time, give them an opportunity to repent of their wickedness and start anew. This opportunity would last forty days, and no longer. In other words, if the people inside the city did not repent, admit their sins and prostrate themselves before Jehovah God within forty days, God would destroy the city as He had destroyed Sodom. This was what Jehovah God wished to tell the people of Nineveh. Clearly, this was no simple declaration. Not only did it convey Jehovah God’s anger, it also conveyed His attitude toward the Ninevites, while at the same time serving as a solemn warning to the people living inside the city. This warning told them that their wicked acts had earned them Jehovah God’s hatred and would soon bring them to the brink of their own annihilation. The life of every inhabitant of Nineveh was therefore in imminent peril.

Gen 22:16–18 By Myself have I sworn, said Jehovah, for because you have done this thing, and have not withheld your son, your only son: That in blessing I will bless you, and in multiplying I will multiply your seed as the stars of the heaven, and as the sand which is on the sea […]

First, let us look at several passages of scripture which describe God’s destruction of Sodom. Gen 19:1–11 And there came two angels to Sodom at even; and Lot sat in the gate of Sodom: and Lot seeing them rose up to meet them; and he bowed himself with his face toward the ground; And he […]

The Creator’s Righteous Disposition Is Real and Vivid

God’s Mercy and Tolerance Are Not Rare—Man’s True Repentance Is Regardless of how angry God had been with the Ninevites, as soon as they declared a fast and donned sackcloth and ashes, His heart began to soften and He began to change His mind. When He proclaimed to them that He would destroy their city—the […]