First, let us look at several passages of scripture which describe God’s destruction of Sodom. 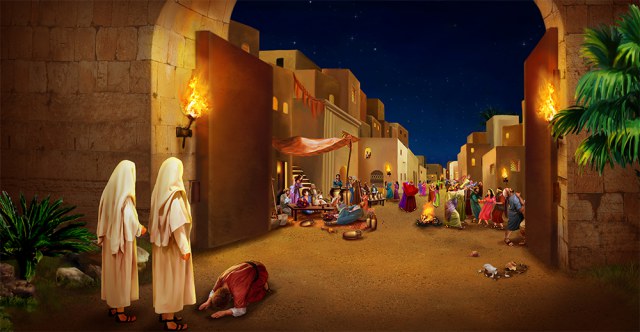 Gen 19:1–11 And there came two angels to Sodom at even; and Lot sat in the gate of Sodom: and Lot seeing them rose up to meet them; and he bowed himself with his face toward the ground; And he said, Behold now, my lords, turn in, I pray you, into your servant’s house, and tarry all night, and wash your feet, and you shall rise up early, and go on your ways. And they said, No; but we will abide in the street all night. And he pressed on them greatly; and they turned in to him, and entered into his house; and he made them a feast, and did bake unleavened bread, and they did eat. But before they lay down, the men of the city, even the men of Sodom, compassed the house round, both old and young, all the people from every quarter: And they called to Lot, and said to him, Where are the men which came in to you this night? bring them out to us, that we may know them. And Lot went out at the door to them, and shut the door after him, And said, I pray you, brothers, do not so wickedly. Behold now, I have two daughters which have not known man; let me, I pray you, bring them out to you, and do you to them as is good in your eyes: only to these men do nothing; for therefore came they under the shadow of my roof. And they said, Stand back. And they said again, This one fellow came in to sojourn, and he will needs be a judge: now will we deal worse with you, than with them. And they pressed sore on the man, even Lot, and came near to break the door. But the men put forth their hand, and pulled Lot into the house to them, and shut to the door. And they smote the men that were at the door of the house with blindness, both small and great: so that they wearied themselves to find the door.

Gen 19:24–25 Then Jehovah rained on Sodom and on Gomorrah brimstone and fire from Jehovah out of heaven; And He overthrew those cities, and all the plain, and all the inhabitants of the cities, and that which grew on the ground.

From these passages, it is not difficult to see that Sodom’s wickedness and corruption had already reached a degree detestable to both man and God, and that in the eyes of God the city therefore deserved to be destroyed. But what happened inside the city before it was destroyed? What inspiration can people draw from these events? What does God’s attitude toward these events show people about His disposition? In order to understand the whole story, let us carefully read what was recorded in the Scripture …

On that night, Lot received two messengers from God and prepared a feast for them. After dining, before they had lain down, people from all over the city surrounded Lot’s residence and called out to him. The Scripture records them as saying, “Where are the men which came in to you this night? bring them out to us, that we may know them.” Who said these words? To whom were they spoken? These were the words of the people of Sodom, yelled outside Lot’s residence and meant for Lot to hear. How does it feel to hear these words? Are you furious? Do these words sicken you? Are you simmering with rage? Do these words not reek of Satan? Through them, can you sense the evil and darkness in this city? Can you sense the brutality and barbarity of these people’s behavior through their words? Can you sense the depth of their corruption through their behavior? Through the content of their speech, it is not difficult to see that their wicked nature and savage disposition had reached a level beyond their own control. Save for Lot, every last person in this city was no different from Satan; the mere sight of another person made these people want to harm and devour them…. These things not only give one a sense of the city’s ghastly and terrifying nature, as well as the aura of death around it, but they also give one a sense of its wickedness and bloodiness.

As he found himself face-to-face with a gang of inhuman thugs, people who were filled with the wild desire to devour human souls, how did Lot respond? According to the Scripture: “I pray you, do not so wickedly. Behold now, I have two daughters which have not known man; let me, I pray you, bring them out to you, and do you to them as is good in your eyes: only to these men do nothing; for therefore came they under the shadow of my roof.” What Lot meant by these words was this: He was willing to give up his two daughters in order to protect the messengers. By any reasonable calculation, these people should have agreed to Lot’s conditions and left the two messengers alone; after all, the messengers were perfect strangers to them, people who had absolutely nothing to do with them and had never harmed their interests. However, motivated by their wicked nature, they did not let the matter rest, but rather intensified their efforts. Here, another one of their exchanges can undoubtedly give people further insight into these people’s true, vicious nature, while at the same time it also enables people to comprehend and understand the reason why God wished to destroy this city.

So what did they say next? As the Bible reads: “Stand back. And they said again, This one fellow came in to sojourn, and he will needs be a judge: now will we deal worse with you, than with them. And they pressed sore on the man, even Lot, and came near to break the door.” Why did they want to break down Lot’s door? The reason is that they were anxious to inflict harm on those two messengers. What brought these messengers to Sodom? Their purpose in coming there was to save Lot and his family, but the people of the city mistakenly thought that they had come to assume official posts. Without asking the messengers’ purpose, the people of the city based their desire to savagely harm these two messengers purely on conjecture; they wished to harm two people who had nothing whatsoever to do with them. It is clear that the people of this city had utterly lost their humanity and reason. The degree of their insanity and wildness was already no different from Satan’s vicious nature by which it harms and devours men.

When they demanded that Lot hand over these people, what did Lot do? From the text we know that Lot did not hand them over. Did Lot know these two messengers of God? Of course not! Yet why was he able to save these two people? Did he know what they had come to do? Although he was unaware of their reason for coming, he did know that they were God’s servants, and so he took them into his house. That he could call these servants of God by the title “lord” shows that Lot was a habitual follower of God, unlike the other people of Sodom. Therefore, when God’s messengers came to him, he risked his own life to take these two servants into his house; furthermore, he also offered up his two daughters in exchange in order to protect these two servants. This was Lot’s righteous deed; it was a tangible expression of Lot’s nature and substance, and it was also the reason God sent His servants to save Lot. When faced with peril, Lot protected these two servants without regard for anything else; he even attempted to trade his two daughters in exchange for the servants’ safety. Other than Lot, was there anyone else inside the city who would have done something like this? As the facts prove—no, there was not! Therefore, it goes without saying that everyone inside Sodom, save for Lot, was a target for destruction, and rightly so—they deserved it.

Gen 6:9–14 These are the generations of Noah: Noah was a just man and perfect in his generations, and Noah walked with God. And Noah begat three sons, Shem, Ham, and Japheth. The earth also was corrupt before God, and the earth was filled with violence. And God looked on the earth, and, behold, it […]

Gen 18:26 And Jehovah said, If I find in Sodom fifty righteous within the city, then I will spare all the place for their sakes. Gen 18:29 And he spoke to Him yet again, and said, Peradventure there shall be forty found there. And He said, I will not do it. Gen 18:30 And he […]