2. God Uses His Words to Establish a Covenant With Man

Gen 9:11–13 And I will establish My covenant with you, neither shall all flesh be cut off any more by the waters of a flood; neither shall there any more be a flood to destroy the earth. And God said, This is the token of the covenant which I make between Me and you and every living creature that is with you, for perpetual generations: I do set My bow in the cloud, and it shall be for a token of a covenant between Me and the earth. 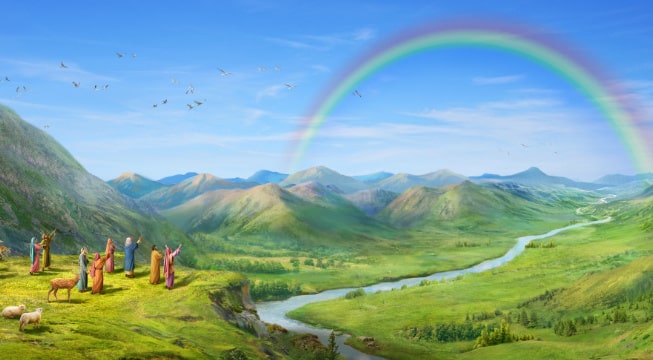 The authority of the Creator is ever shown forth and exerted amongst all creatures, and He not only rules the fate of all things, but He also rules mankind, the special creature which He created with His own hands and which is possessed of a different life structure and exists in a different life form. After making all things, the Creator did not cease to express His authority and power; for Him, the authority with which He held sovereignty over all things and the fate of the whole of mankind formally began only once mankind was truly born from His hand. He intended to manage mankind, and rule mankind; He intended to save mankind and to truly gain mankind, to gain a mankind that could govern all things; He intended to make such a mankind live under His authority, and know and obey His authority. Thus, God began to officially express His authority among man using His words, and began to use His authority to realize His words. Of course, God’s authority was shown forth in all places during this process; I have merely picked out some specific, well-known examples from which you may understand and know the uniqueness of God and His unique authority.

There is a similarity between the passage in Genesis 9:11–13 and the passages above concerning the record of God’s creation of the world, yet there is also a difference. What is the similarity? The similarity lies in God’s use of words to do that which He intended, and the difference is that the passages quoted here represent God’s discourse with man, in which He established a covenant with man and told man of that which was contained within the covenant. This exertion of God’s authority was achieved during His dialogue with man, which is to say that, prior to the creation of mankind, God’s words were instructions and orders, which were issued to the creatures that He intended to create. But now there was someone to hear the words of God, and so His words were both a dialogue with man and also an exhortation and admonishment to man. Moreover, God’s words were commandments that bore His authority and which were delivered to all things.

What action of God is recorded in this passage? The passage records the covenant that God established with man after His destruction of the world with a flood; it tells man that God would not wreak such destruction upon the world again, and that, to this end, God created a sign. What was this sign? In the Scriptures it is said that “I do set My bow in the cloud, and it shall be for a token of a covenant between Me and the earth.” These are the original words spoken by the Creator to mankind. As He said these words, a rainbow appeared before the eyes of man, and it has remained there until this very day. Everyone has seen such a rainbow, and when you see it, do you know how it appears? Science is incapable of proving it, or of locating its source, or identifying its whereabouts. That is because the rainbow is a sign of the covenant established between the Creator and man; it requires no scientific basis, it was not made by man, nor is man capable of altering it. It is a continuation of the Creator’s authority after He spoke His words. The Creator used His own particular method to abide by His covenant with man and His promise, and so His use of the rainbow as a sign of the covenant that He had established is a heavenly edict and law that shall remain forever unchanged, whether in regard to the Creator or the created mankind. This immutable law is, it must be said, another true manifestation of the Creator’s authority following His creation of all things, and it must be said that the authority and power of the Creator are limitless; His use of the rainbow as a sign is a continuation and extension of the Creator’s authority. This was another act performed by God using His words, and was a sign of the covenant that God had established with man using words. He told man of that which He resolved to bring about, and in what manner it would be fulfilled and achieved. In this way the matter was fulfilled according to the words from God’s mouth. Only God is possessed of such power, and today, several thousand years after He spoke these words, man can still look upon the rainbow spoken from the mouth of God. Because of those words uttered by God, this thing has remained unaltered and unchanged right up until today. None can remove this rainbow, none can change its laws, and it exists solely for the words of God. This is precisely the authority of God. “God is as good as His word, and His word will be accomplished, and that which He accomplishes lasts forever.” Such words are clearly manifested here, and it is a clear sign and characteristic of the authority and power of God. Such a sign or characteristic is not possessed by or seen in any of the created beings, nor is it seen in any of the non-created beings. It belongs only to the unique God, and distinguishes the identity and essence possessed only by the Creator from that of the creatures. At the same time, it is also a sign and characteristic that, apart from God Himself, can never be surpassed by any created or non-created being.

The Authority of the Creator Is Immutable and Unoffendable

The Authority of the Creator Is Immutable and Unoffendable What have you seen in these three parts of scripture? Have you seen that there is a principle by which God exerts His authority? For example, God used a rainbow to establish a covenant with man—He placed a rainbow in the clouds in order to tell […]

Having given Abraham a son, the words that God had spoken to Abraham were fulfilled. This does not mean that God’s plan stopped here; on the contrary, God’s magnificent plan for the management and salvation of mankind had only just begun, and His blessing of a son to Abraham was but a prelude to His […]