Can Man Enter Kingdom of Heaven by Laboring for the Lord?

I believe that all true believers in the Lord expect the Lord Jesus to come to take them into heaven soon. Some firmly believe that they will surely be taken into the kingdom of heaven by the Lord when He returns, if they work hard for Him, shepherd the church believers, and even give up their family and marriage, dedicating their all to Him.

In fact, such a thought is wrong. Our sacrifice, expenditure, and hard work do not mean that we have been cleansed, because we are possessed of satanic dispositions of arrogance, self-conceit, self-rightness and self-importance, and can still resist God.

To trace the root, originally when in heaven, the archangel was the greatest of heaven’s angels and God authorized it to govern millions of angels. After God created mankind on earth, its ambitions were so inflated that it even desired to be God’s equal and rule over mankind. In the end, it was cast out of heaven. After we were corrupted by Satan, our nature became that of the archangel: arrogant and self-conceited, self-right and self-important, and having no place for God in our hearts as well as no respect for others…. With such corrupt dispositions, we can contend with and fight against God at any time. When someone first believes in God, he produces conceptions about God when God does something against his will, and even carelessly talks about and judges the Lord Jesus and His work. After he does services for a period of time, he can often testify about how much work he does or how much he suffers, even regarding himself as a holy man and one that pleases God because he can expound on the Bible, support the believers, and work and preach for the Lord. And in the end, he thinks that he has finished his course and cast aside all that he should, thus he asks God for a glorious crown and a place in the kingdom of heaven just like Paul. … The more work one has done, the easier it is for him to think highly of himself, feeling that he has capital. As a result, he becomes more arrogant, self-right and unreasonable. The Jewish Pharisees are typical examples.

They served Jehovah God in the temple for generation after generation. Considering themselves to be well versed in the law, they frequently interpreted the law amongst the Jewish people in order to obtain their respect and worship. When the Lord Jesus came to do His redemptive work, their arrogant and self-right nature was completely exposed. They did not know God’s work, and used their brain and religious knowledge and theory to resist the Lord and His work. They thought that the One to come should be called Messiah rather than Jesus, and should be born in the royal palace or a noble family rather than in a poor carpenter’s. Therefore, they regarded the Lord Jesus as a man instead of God, and thus spared no effort to condemn and slander Him. Even though they listened to the Lord’s preaching, it wasn’t to seek the truth, but to try to find fault with Him so they could hand Him over to the Roman government to be punished. In the end, they incited and deceived the Jewish people, allied themselves with the Roman government and nailed the Lord Jesus onto the cross. When the Lord Jesus did His work, the Pharisees not only refused to investigate His work themselves, but deceived and controlled the Jewish people, and forbade them from converting to Him, fighting against God for His chosen people as well as status. 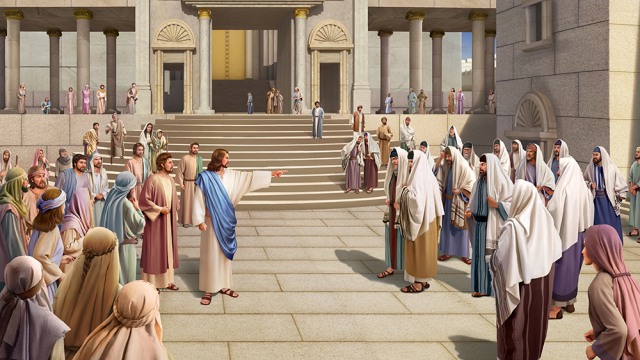 Therefore, the Lord Jesus cursed them, “Woe to you, scribes and Pharisees, hypocrites! for you compass sea and land to make one proselyte, and when he is made, you make him twofold more the child of hell than yourselves” (Matthew 23:15) “But woe to you, scribes and Pharisees, hypocrites! for you shut up the kingdom of heaven against men: for you neither go in yourselves, neither suffer you them that are entering to go in” (Matthew 23:13). The Pharisees’ evil deeds of condemning and resisting the Lord Jesus, and deceiving and controlling people, thoroughly revealed their devilish substance of antichrists. Eventually, they paid the due price for their maleficence and were subjected to destruction of their nation.

We can see that if we do not get rid of the corrupt dispositions of arrogance, self-rightness, self-importance and conceit, we will never be able to be purified, much less will we be approved to enter into the kingdom of heaven by the Lord, even if we work hard and spend for the Lord all our life. In Leviticus 11:45, Jehovah God says, “you shall therefore be holy, for I am holy.” As God is holy, He won’t bring filthy and corrupt people into His kingdom. It is also said in Hebrews 12:14, “… holiness, without which no man shall see the Lord.” The Bible says that man can see the Lord Jesus only if he is cleansed. It doesn’t say that all those who can spend and sacrifice for the Lord will see Him. Therefore, to be purified is the goal that we should pursue in believing in the Lord. Only when we are purified by God, no longer lives by satanic dispositions of arrogance, conceit, self-rightness, and self-importance, and can truly do God’s will in everything, can we receive God’s approval and be fit to enter the kingdom of God.

Enter the Kingdom of Heaven
Previous True Meaning of Following the Heavenly Father's Will
Next All of us have believed in the Lord for many years, and have always followed the example of Paul in our work for the Lord. We have been faithful to the name and way of the Lord, and the crown of righteousness surely awaits us. Today, we need only focus on working hard for the Lord, and watching for His return. Only thus, can we be taken into the kingdom of heaven. That’s because in the Bible it is said that “for they shall not be ashamed that wait for Me” (Isa 49:23). We believe the Lord’s promise: He will take us into the kingdom of heaven at His return. Could there really be anything wrong with practicing in this way?

Can We Enter the Heavenly Kingdom by Emulating Paul?

When I was 18 years old I believed in the Lord Jesus because of my illness, gradually I recovered as a result of the Lord’s grace. To repay His love, I determined to work for the Lord all my life. Then I joined a church choir and became a singing teacher. I often sang hymns […]

Relevant Words of God: In His final work of concluding the age, God’s disposition is one of chastisement and judgment, in which He reveals all that is unrighteous, in order to publicly judge all peoples, and to perfect those who love Him with a sincere heart. Only a disposition such as this can bring the […]