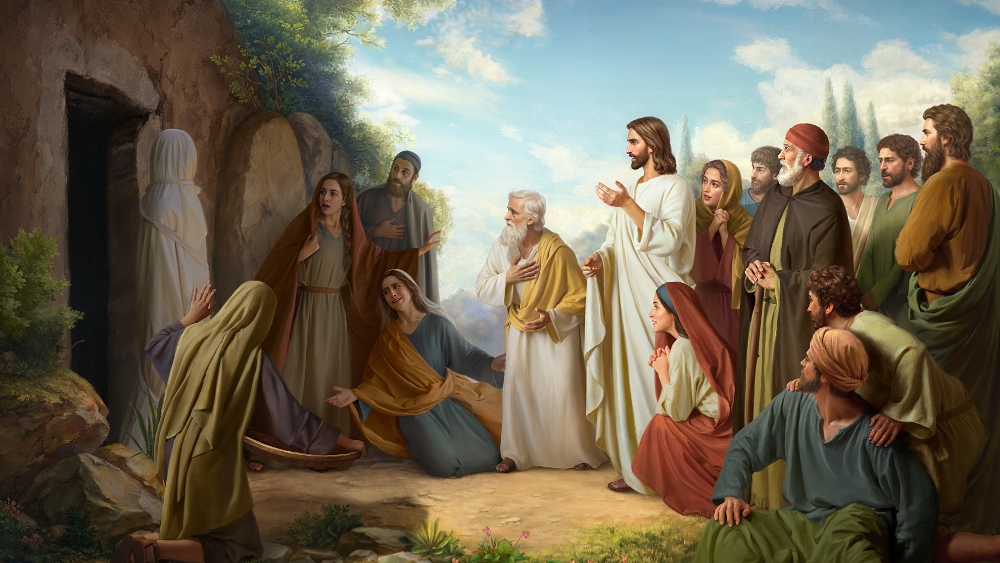 And when he thus had spoken, he cried with a loud voice, Lazarus, come forth.And he that was dead came forth, bound hand and foot with grave clothes: and his face was bound about with a napkin. Jesus said to them, Loose him, and let him go. -John 11:43-44

The resurrection of Lazarus made me see that the Lord Jesus is the incarnation of God, because only God seizes the key to Hades. Only God has the final say about when we were born and when we will die. Only God Himself can do this miracle. One day, I read a passage from a gospel book: “When the Lord Jesus brought Lazarus back from the dead, He used one line: ‘Lazarus, come forth.’ He said nothing aside from this—what do these words represent? They represent that God can accomplish anything through speaking, including resurrecting a dead man. When God created all things, when He created the world, He did so with words. He used spoken commands, words with authority, and just like that all things were created. It was accomplished like that. This single line spoken by the Lord Jesus was just like the words spoken by God when He created the heavens and earth and all things; it equally held the authority of God, the ability of the Creator. All things were formed and stood fast because of words from God’s mouth, and just the same, Lazarus walked out from his tomb because of the words from the Lord Jesus’ mouth. This was the authority of God, demonstrated and realized in His incarnate flesh. This type of authority and ability belonged to the Creator, and to the Son of man in whom the Creator was realized. This is the understanding taught to mankind by God bringing Lazarus back from the dead.”

From this passage I know that God’s words have authority. Although the outward appearance of the Lord Jesus is ordinary and normal, the words from His mouth are truth, with power and ability, and can control people’s life and death, and can dominate the survival of all things. This is also God’s uniqueness, and none of the created or non-created beings may possess it.

• Christ Does the Work of Judgment With the Truth

• The Resurrection of Lazarus Proved 2 Aspects of God’s Essence

Today’s Gospel And from the days of John the Baptist until now the kingdom of heaven suffers violence, and the violent take it by force. - Matthew 11:12 Reflection From this verse, we can know the requirement for entering the kingdom of heaven that the Lord Jesus pointed out for us: Only by practicing God’s […]

Let God Take the First Place in Our Heart – Reflection on Matthew 23:6

Today’s Gospel And love the uppermost rooms at feasts, and the chief seats in the synagogues, And greetings in the markets, and to be called of men, Rabbi, Rabbi. – Matthew 23:6-7 Reflection The chief priests, scribes, and Pharisees loved and valued status, and they were eager for people to adore them, even treat them […]

Today’s Gospel Jesus said to him, I am the way, the truth, and the life: no man comes to the Father, but by Me. We all know that the Lord Jesus is Christ in the flesh, that the essence of Christ is the truth, the way, and the life, and that only by following Christ, […]

Relying on God in All Things – Reflection on Proverbs 3:6﻿

Today’s Gospel In all your ways acknowledge him, and he shall direct your paths. - Proverbs 3:6 Reflection This verse shows us that we should rely on God in all things, and firmly believe that all things are in God’s hands and that only by obeying His orchestrations and arrangements can we have a way […]