I Finally Get Rid of the Temptation of Mahjong (I)

I loved playing chess since a little child, and was obsessed with playing poker when I grew up. Later I learned to play mahjong. At that time, we, a few mahjong friends, often chatted together. Once, we talked about a peer guy, who does not play mahjong, smoke or drink. My mahjong friends laughed at him and said: “First he does not play mahjong, second not drink, third not smoke, fourth not visit prostitutes. What’s the meaning of life without these four things? I would rather die.” Listening to this, I thought: Yeah, life is short, why not entertain in time? Life would be meaningless without entertainment. So playing mahjong is normal. Under the control of this kind of fallacy, gradually I spent more and more time playing mahjong, and finally I became a frequent visitor to the mahjong hall. At the beginning, I just thought of playing mahjong as an entertainment. However, mahjong table is about two words: win or lose. Once I won money, I was not willing to stop, wanting to take advantage of the good luck to win more; losing money, I was not resigned, wanting to win back again. Under the domination of such desire and ambition, as long as I had free time, I would go to the mahjong hall to play mahjong. Sometimes before I finished my meal, they urged me on the phone in waves. I anxiously and casually finished my meal for the fear of that I could not play because of being late. In this way, I unconsciously became obsessed with mahjong, and felt like losing something if I did not play mahjong for two days, so I often played mahjong until 11 or 12 o’clock at night. 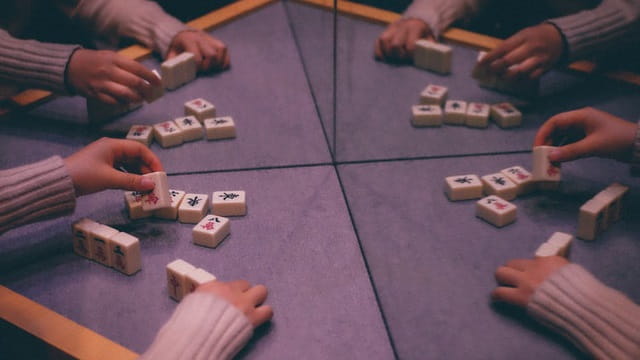 At that time my family was poor, and sometimes it was even a problem to buy the daily necessities. And my wife developed hyperthyroidism and had to go to hospital for checkups every two or three months. Sometimes when it was time for checkups, we had to give it up for lack of money. Sometimes my wife complained of my playing mahjong, and I also felt blamed, but I had been deep in it so that I could not control myself. In order to stop me playing mahjong, my wife hid the money; then I rummaged through the home to find it. No matter where she hid the money, I would find it and then went to play mahjong. Once I stole the money from home to play mahjong, and my wife hit her own head enragedly after knowing it, crying and scolding me for having no conscience. Seeing the way my wife tortured herself, I felt like a knife twisting in my heart, thinking it would be better that she killed me with a knife than hitting herself. I hit my head with her hands in tears to let out her anger. At that time I also particularly hated myself and felt I was really bad. The family was poor, but I lost all the money on the mahjong table. At that moment, I really wanted to cut my fingers. … During the following half a month, I restrained myself not to answer the phone from the mahjong friends, but in the days without mahjong, it seemed that my whole soul was hooked, feeling upset every day and not having the thought to do anything. As a result, after a period of time, I could not help playing mahjong again. In this way, because of playing mahjong, I did not know how many times my wife angrily quarreled with me and how much tears she shed. I often felt painful, but was unable to get rid of it.

Later, my wife accepted the work of God in the last days and preached the gospel to me. By reading the words of God and communicating the truth with brothers and sisters, I know that playing mahjong is a means by which Satan corrupts us, luring us to sin, and bringing us to fall. Since then, when I wanted to play mahjong, I had a sense of guilt in my heart and tried to control myself not to play, but I could not, still involuntarily playing it, and I felt very upset about it. Later, at a meeting when I opened my heart and told brothers and sisters about my own difficulties, they read me two paragraphs of the words of God: “One after another, all these trends carry an evil influence that continually degenerates man, that lowers their morals and their quality of character more and more, to the extent that we can even say the majority of people now have no integrity, no humanity, neither do they have any conscience, much less any reason. So what are these trends? You cannot see these trends with the naked eye. When the wind of a trend blows through, perhaps only a small number of people will become the trendsetters. They start off doing this kind of thing, accepting this kind of idea or this kind of perspective. The majority of people, however, in the midst of their unawareness, will still be continually infected, assimilated and attracted by this kind of trend, until they all unknowingly and involuntarily accept it, and are all submerged in and controlled by it. For man who is not of sound body and mind, who never knows what is truth, who cannot tell the difference between positive and negative things, these kinds of trends one after another make them all willingly accept these trends, the life view, the life philosophies and values that come from Satan. They accept what Satan tells them on how to approach life and the way to live that Satan “bestows” on them. They have not the strength, neither do they have the ability, much less the awareness to resist” (“God Himself, the Unique VI”). “Satan directs the tide of evil, and upsets, impairs, and interrupts every aspect of God’s work. For the last several thousand years, apart from corrupting and abusing mankind, and luring and deceiving man to depravity, and to the rejection of God, so man walks toward the valley of the shadow of death, has Satan done anything that deserves even the slightest commemoration, commendation, or cherishment by man?” (“God Himself, the Unique I”) Through reading the words of God and communicating with brothers and sisters, I understood that after being corrupted by Satan, without the guidance of God’s words, man does not know what is right and what is wrong and has no knowledge of what is evil and what is good. Satan takes advantage of the weakness that we can’t distinguish between good and evil, right and wrong, but seek the entertainment of the flesh, and it uses the evil trends, such as playing mahjong, landlord, games and so on, to bring us to drink and eat. Under its temptation, we become more and more selfish and despicable. In order to play mahjong, we have lost the human nature and conscience. Thinking of myself, I was indeed corrupted by Satan too deeply and did not have normal conscience. Since I formed the bad habit of playing mahjong, in order to meet my own desires, I had been trying all kinds of ways to get money from home, cheating and stealing, regardless of the life and death of my family, so that both my wife and I lived in pain.  After understanding these, I secretly warned myself: No, I can’t fall again to let Satan corrupt me, I have to rely on God to overcome the temptation of mahjong. After that, I brought my own difficulties before God, looking up to God and praying to God, and began to forsake myself consciously not to play mahjong.

Part Two: Get Rid of the Temptation of Mahjong (II)

He who believed in the Lord lived in sin and couldn’t find the path to overcoming repeated sin. He often prayed to God in the hope that the Lord would forgive him. … A chance encounter enabled him to find the path.

You try to act according to the Lord Jesus’ word, but fail to shed the bonds of sin? This article will tell you how to be free from sin and be cleansed.

I Have Walked on the Path to Purification

In December, I received baptism and formally walked on the way of confession and repentance. One time in the church, I heard a pastor read the verses of Matthew 18:21-22. I thought: Why did the Lord Jesus have so great tolerance and patience?

We continue to sin after being saved. Will we be raptured and see the Lord’s face? Do you know how to stop sinning? Read this article, and you’ll get the answer.