Now Korah, the son of Izhar, the son of Kohath, the son of Levi, and Dathan and Abiram, the sons of Eliab, and On, the son of Peleth, sons of Reuben, took men: And they rose up before Moses, with certain of the children of Israel, two hundred and fifty princes of the assembly, famous in the congregation, men of renown: And they gathered themselves together against Moses and against Aaron, and said to them, You take too much on you, seeing all the congregation are holy, every one of them, and the LORD is among them: why then lift you up yourselves above the congregation of the LORD?

And when Moses heard it, he fell on his face: And he spoke to Korah and to all his company, saying, Even to morrow the LORD will show who are his, and who is holy; and will cause him to come near to him: even him whom he has chosen will he cause to come near to him. This do; Take you censers, Korah, and all his company; And put fire therein, and put incense in them before the LORD to morrow: and it shall be that the man whom the LORD does choose, he shall be holy: you take too much on you, you sons of Levi.

And Moses said to Korah, Hear, I pray you, you sons of Levi: Seems it but a small thing to you, that the God of Israel has separated you from the congregation of Israel, to bring you near to himself to do the service of the tabernacle of the LORD, and to stand before the congregation to minister to them? And he has brought you near to him, and all your brothers the sons of Levi with you: and seek you the priesthood also? For which cause both you and all your company are gathered together against the LORD: and what is Aaron, that you murmur against him?

And the LORD spoke to Moses and to Aaron, saying, Separate yourselves from among this congregation, that I may consume them in a moment. And they fell on their faces, and said, O God, the God of the spirits of all flesh, shall one man sin, and will you be wroth with all the congregation?

And the LORD spoke to Moses, saying, Speak to the congregation, saying, Get you up from about the tabernacle of Korah, Dathan, and Abiram.

And Moses rose up and went to Dathan and Abiram; and the elders of Israel followed him. And he spoke to the congregation, saying, Depart, I pray you, from the tents of these wicked men, and touch nothing of their’s, lest you be consumed in all their sins. So they got up from the tabernacle of Korah, Dathan, and Abiram, on every side: and Dathan and Abiram came out, and stood in the door of their tents, and their wives, and their sons, and their little children. And Moses said, Hereby you shall know that the LORD has sent me to do all these works; for I have not done them of my own mind. If these men die the common death of all men, or if they be visited after the visitation of all men; then the LORD has not sent me. But if the LORD make a new thing, and the earth open her mouth, and swallow them up, with all that appertain to them, and they go down quick into the pit; then you shall understand that these men have provoked the LORD.

The Earth Swallows Up Korah

And it came to pass, as he had made an end of speaking all these words, that the ground split asunder that was under them: And the earth opened her mouth, and swallowed them up, and their houses, and all the men that appertained to Korah, and all their goods. They, and all that appertained to them, went down alive into the pit, and the earth closed on them: and they perished from among the congregation. And all Israel that were round about them fled at the cry of them: for they said, Lest the earth swallow us up also. And there came out a fire from the LORD, and consumed the two hundred and fifty men that offered incense. 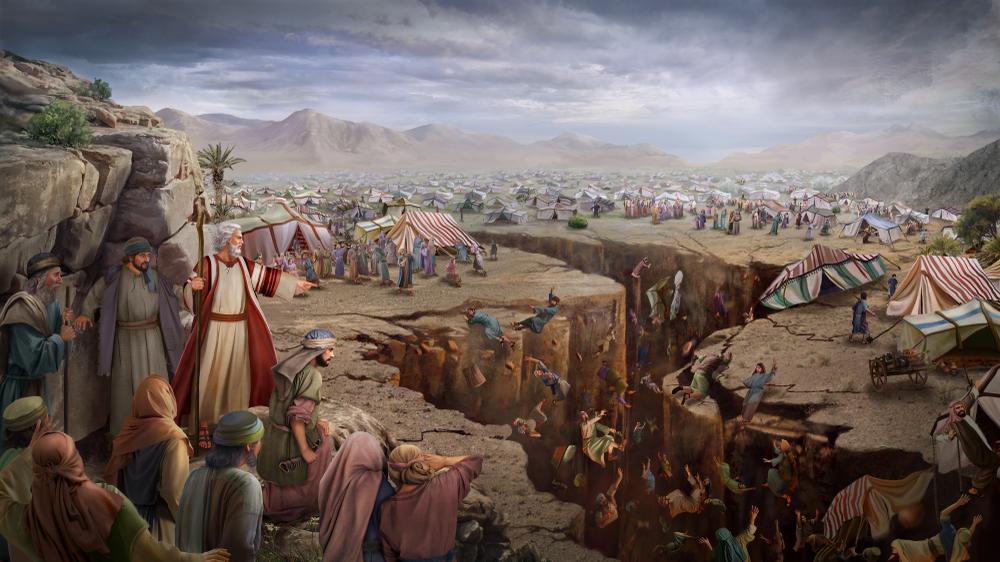 Salt and Light – Matthew 5 (Matthew 5:13-16) You are the salt of the earth: but if the salt have lost his flavor, with which shall it be salted? it is thereafter good for nothing, but to be cast out, and to be trodden under foot of men. Salt and Light You are the light […]

The Triumphal Entry (Matthew 21:1-11) And when they drew near to Jerusalem, and were come to Bethphage, to the mount of Olives, then sentJesus two disciples, Saying to them, Go into the village over against you, and straightway you shall find an ass tied, and a colt with her: loose them, and bring them to me. […]

Jesus Calls Matthew (Matthew 9:9-13) 9And as Jesus passed forth from there, he saw a man, named Matthew, sitting at the receipt of custom: and he said to him, Follow me. And he arose, and followed him. 10And it came to pass, as Jesus sat at meat in the house, behold, many publicans and sinners came […]