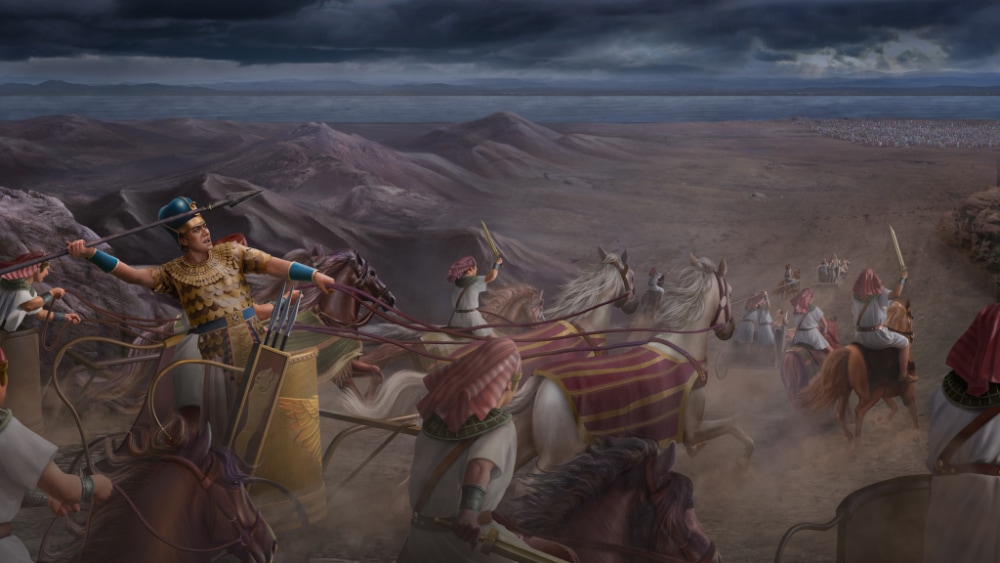 And the LORD spoke to Moses, saying, Speak to the children of Israel, that they turn and encamp before Pihahiroth, between Migdol and the sea, over against Baalzephon: before it shall you encamp by the sea.For Pharaoh will say of the children of Israel, They are entangled in the land, the wilderness has shut them in. And I will harden Pharaoh’s heart, that he shall follow after them; and I will be honored on Pharaoh, and on all his host; that the Egyptians may know that I am the LORD. And they did so.

And it was told the king of Egypt that the people fled: and the heart of Pharaoh and of his servants was turned against the people, and they said, Why have we done this, that we have let Israel go from serving us? And he made ready his chariot, and took his people with him: And he took six hundred chosen chariots, and all the chariots of Egypt, and captains over every one of them. And the LORD hardened the heart of Pharaoh king of Egypt, and he pursued after the children of Israel: and the children of Israel went out with an high hand. But the Egyptians pursued after them, all the horses and chariots of Pharaoh, and his horsemen, and his army, and overtook them encamping by the sea, beside Pihahiroth, before Baalzephon.

And when Pharaoh drew near, the children of Israel lifted up their eyes, and, behold, the Egyptians marched after them; and they were sore afraid: and the children of Israel cried out to the LORD. And they said to Moses, Because there were no graves in Egypt, have you taken us away to die in the wilderness? why have you dealt thus with us, to carry us forth out of Egypt? Is not this the word that we did tell you in Egypt, saying, Let us alone, that we may serve the Egyptians? For it had been better for us to serve the Egyptians, than that we should die in the wilderness.

And Moses said to the people, Fear you not, stand still, and see the salvation of the LORD, which he will show to you to day: for the Egyptians whom you have seen to day, you shall see them again no more for ever. The LORD shall fight for you, and you shall hold your peace. 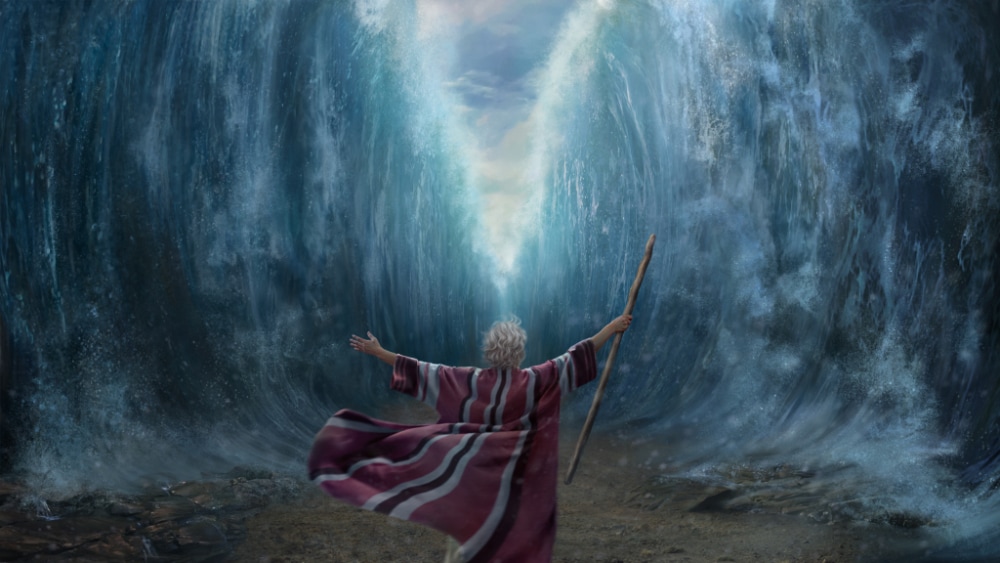 And the LORD said to Moses, Why cry you to me? speak to the children of Israel, that they go forward: But lift you up your rod, and stretch out your hand over the sea, and divide it: and the children of Israel shall go on dry ground through the middle of the sea. And I, behold, I will harden the hearts of the Egyptians, and they shall follow them: and I will get me honor on Pharaoh, and on all his host, on his chariots, and on his horsemen. And the Egyptians shall know that I am the LORD, when I have gotten me honor on Pharaoh, on his chariots, and on his horsemen.

And the angel of God, which went before the camp of Israel, removed and went behind them; and the pillar of the cloud went from before their face, and stood behind them: And it came between the camp of the Egyptians and the camp of Israel; and it was a cloud and darkness to them, but it gave light by night to these: so that the one came not near the other all the night.

And Moses stretched out his hand over the sea; and the LORD caused the sea to go back by a strong east wind all that night, and made the sea dry land, and the waters were divided. And the children of Israel went into the middle of the sea on the dry ground: and the waters were a wall to them on their right hand, and on their left. And the Egyptians pursued, and went in after them to the middle of the sea, even all Pharaoh’s horses, his chariots, and his horsemen. And it came to pass, that in the morning watch the LORD looked to the host of the Egyptians through the pillar of fire and of the cloud, and troubled the host of the Egyptians,And took off their chariot wheels, that they drove them heavily: so that the Egyptians said, Let us flee from the face of Israel; for the LORD fights for them against the Egyptians.

And the LORD said to Moses, Stretch out your hand over the sea, that the waters may come again on the Egyptians, on their chariots, and on their horsemen. And Moses stretched forth his hand over the sea, and the sea returned to his strength when the morning appeared; and the Egyptians fled against it; and the LORD overthrew the Egyptians in the middle of the sea. And the waters returned, and covered the chariots, and the horsemen, and all the host of Pharaoh that came into the sea after them; there remained not so much as one of them. But the children of Israel walked on dry land in the middle of the sea; and the waters were a wall to them on their right hand, and on their left.

The Triumphal Entry (Matthew 21:1-11) And when they drew near to Jerusalem, and were come to Bethphage, to the mount of Olives, then sentJesus two disciples, Saying to them, Go into the village over against you, and straightway you shall find an ass tied, and a colt with her: loose them, and bring them to me. […]

The First Plague: Blood Exodus 7:14-25 And the LORD said to Moses, Pharaoh’s heart is hardened, he refuses to let the people go. Get you to Pharaoh in the morning; see, he goes out to the water; and you shall stand by the river’s brink against he come; and the rod which was turned to […]

Jesus Calls Matthew (Matthew 9:9-13) 9And as Jesus passed forth from there, he saw a man, named Matthew, sitting at the receipt of custom: and he said to him, Follow me. And he arose, and followed him. 10And it came to pass, as Jesus sat at meat in the house, behold, many publicans and sinners came […]

God Challenges Job (Job 38-39) Then the LORD answered Job out of the whirlwind, and said, Who is this that darkens counsel by words without knowledge? Gird up now your loins like a man; for I will demand of you, and answer you me. Where were you when I laid the foundations of the earth? […]