"Not every one that said to me, Lord, Lord, shall enter into the kingdom of heaven; but he that does the will of my Father which is in heaven." 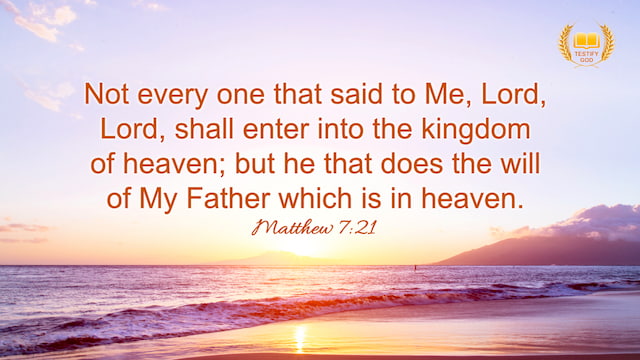 To enter the kingdom of heaven is every Christian’s wish, but what conditions must be fulfilled in order to enter the kingdom of heaven? Many people think that as long as they hold on to the name of the Lord, labor and sacrifice for the Lord, they can be brought into the kingdom of heaven. I thought so, but later I read a passage online: “Many believers in the Lord believe the same thing that you do: ‘As long as I work hard and bear the cross for the Lord, exhibit some good behaviors and bear witness well, I will be qualified to wait for the Lord’s return and be raptured into the kingdom of heaven.’ Humans see this as perfectly reasonable, but is that what God’s will is? Do His words bear that out? If not, then this thinking on the part of man certainly comes out of human notions and imagination. Thinking back to when the Pharisees would frequently explain the scriptures to people in the synagogues, they appeared to strictly adhere to the laws, the rules, and the commandments, and in others’ eyes they were very pious and were upstanding in their behavior. But why did they madly resist and condemn the Lord Jesus and even nail Him to the cross? This proves that people may work hard for the Lord and be well-behaved on the outside but it does not mean that they obey and love God in their hearts. Outward piety does not represent a heart that magnifies and reveres God. People may frequently explain the Bible to others, but that doesn’t mean that they are able to put the Lord’s words into practice or to follow God’s way.” Until then did I realize that my opinion was based on Paul’s words rather than Jesus Christ’s. Jesus Christ never said that one could enter the kingdom of heaven by working hard. Instead, He said, “Not every one that said to me, Lord, Lord, shall enter into the kingdom of heaven; but he that does the will of my Father which is in heaven” (Matthew 7:21). Implementing the heavenly father’s will is implementing God’s words, God’s commandments and God’s instructions. God says, “You can devote your heart and body and all of your genuine love to God, place them before Him, be completely obedient toward Him, and be absolutely considerate to His will. Not for the flesh, not for family, and not for your personal desires, but for the interests of God’s household. In everything you can take God’s word as the principle, as the foundation. That way, your intentions and your perspectives will all be in the right place, and you will be someone who gains God’s praise before Him. Those who God likes are people who are absolute toward Him, people who are devoted to Him and none other.”

Want to learn more gospel news about the arrival of God’s kingdom? You’re welcome to connect with us on Messenger.

• Can Believers Absolved of Sins Enter the Kingdom of Heaven

• What Kinds of People Can Enter Heavenly Kingdom?

» Most people also watch Christian Movie: “Blessed Are the Poor in Spirit” Clip: Can the Saved Enter the Kingdom of Heaven?

Today’s Gospel Watch and pray, that you enter not into temptation: the spirit indeed is willing, but the flesh is weak.– Matthew 26:41 Reflection Before the Lord Jesus prayed in the Garden of Gethsemane, He exhorted His disciples to watch and pray, but they fell asleep. Jesus Christ knew they were willing to do as […]

He Who Keeps His Mouth Keeps His Life – Reflection on Proverbs 13:3

Today’s Gospel He that keeps his mouth keeps his life: but he that opens wide his lips shall have destruction. - Proverbs 13:3 Reflection We have been corrupted by Satan right up until today and are full of corrupt satanic dispositions. Especially arrogant, they have a big mouth and arbitrarily judge others. Just when Jesus […]

Today’s Gospel But he answered and said, It is written, Man shall not live by bread alone, but by every word that proceeds out of the mouth of God. - Matthew 4:4 Reflection This verse should be many Christians’ motto. God’s word is the truth and the daily bread of our life. Because of God’s […]