And the LORD said to Moses, Rise up early in the morning, and stand before Pharaoh, and say to him, Thus said the LORD God of the Hebrews, Let my people go, that they may serve me. For I will at this time send all my plagues on your heart, and on your servants, and on your people; that you may know that there is none like me in all the earth. For now I will stretch out my hand, that I may smite you and your people with pestilence; and you shall be cut off from the earth. And in very deed for this cause have I raised you up, for to show in you my power; and that my name may be declared throughout all the earth. As yet exalt you yourself against my people, that you will not let them go? 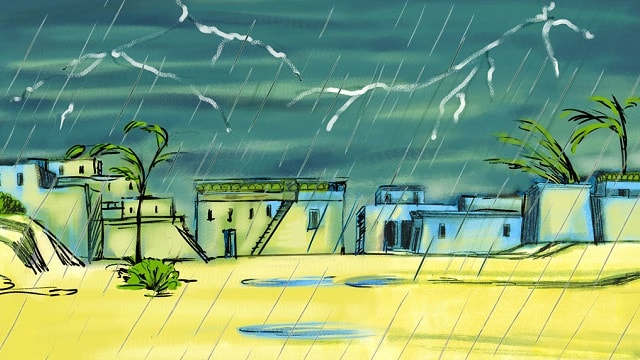 Behold, to morrow about this time I will cause it to rain a very grievous hail, such as has not been in Egypt since the foundation thereof even until now. Send therefore now, and gather your cattle, and all that you have in the field; for on every man and beast which shall be found in the field, and shall not be brought home, the hail shall come down on them, and they shall die. He that feared the word of the LORD among the servants of Pharaoh made his servants and his cattle flee into the houses: And he that regarded not the word of the LORD left his servants and his cattle in the field.

And the LORD said to Moses, Stretch forth your hand toward heaven, that there may be hail in all the land of Egypt, on man, and on beast, and on every herb of the field, throughout the land of Egypt. And Moses stretched forth his rod toward heaven: and the LORD sent thunder and hail, and the fire ran along on the ground; and the LORD rained hail on the land of Egypt. So there was hail, and fire mingled with the hail, very grievous, such as there was none like it in all the land of Egypt since it became a nation. And the hail smote throughout all the land of Egypt all that was in the field, both man and beast; and the hail smote every herb of the field, and broke every tree of the field. Only in the land of Goshen, where the children of Israel were, was there no hail.And Pharaoh sent, and called for Moses and Aaron, and said to them, I have sinned this time: the LORD is righteous, and I and my people are wicked. Entreat the LORD (for it is enough) that there be no more mighty thunder and hail; and I will let you go, and you shall stay no longer. And Moses said to him, As soon as I am gone out of the city, I will spread abroad my hands to the LORD; and the thunder shall cease, neither shall there be any more hail; that you may know how that the earth is the LORD’s. But as for you and your servants, I know that you will not yet fear the LORD God. And the flax and the barley was smitten: for the barley was in the ear, and the flax was in bloom. But the wheat and the rye were not smitten: for they were not grown up. And Moses went out of the city from Pharaoh, and spread abroad his hands to the LORD: and the thunders and hail ceased, and the rain was not poured on the earth. And when Pharaoh saw that the rain and the hail and the thunders were ceased, he sinned yet more, and hardened his heart, he and his servants. And the heart of Pharaoh was hardened, neither would he let the children of Israel go; as the LORD had spoken by Moses.

Joshua 6 – The Walls of Jericho

The Walls of Jericho Joshua 6:1-21 Now Jericho was straightly shut up because of the children of Israel: none went out, and none came in. And the LORD said to Joshua, See, I have given into your hand Jericho, and the king thereof, and the mighty men of valor. And you shall compass the city, […]

The Third Plague: Gnats Exodus 8:16-19 And the LORD said to Moses, Say to Aaron, Stretch out your rod, and smite the dust of the land, that it may become lice throughout all the land of Egypt. And they did so; for Aaron stretched out his hand with his rod, and smote the dust of […]

The Birth of Jesus (Matthew 1:18-25) Now the birth of Jesus Christ was on this wise: When as his mother Mary was espoused to Joseph, before they came together, she was found with child of the Holy Ghost. Then Joseph her husband, being a just man, and not willing to make her a public example, […]