And the LORD spoke to Moses, Go to Pharaoh, and say to him, Thus said the LORD, Let my people go, that they may serve me. And if you refuse to let them go, behold, I will smite all your borders with frogs: And the river shall bring forth frogs abundantly, which shall go up and come into your house, and into your bedchamber, and on your bed, and into the house of your servants, and on your people, and into your ovens, and into your kneading troughs: And the frogs shall come up both on you, and on your people, and on all your servants. And the LORD spoke to Moses, Say to Aaron, Stretch forth your hand with your rod over the streams, over the rivers, and over the ponds, and cause frogs to come up on the land of Egypt. And Aaron stretched out his hand over the waters of Egypt; and the frogs came up, and covered the land of Egypt. And the magicians did so with their enchantments, and brought up frogs on the land of Egypt. 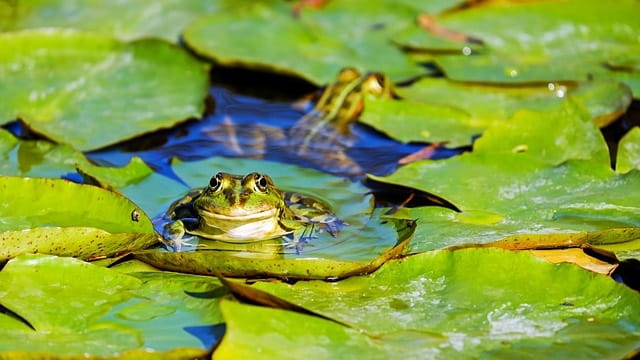 Then Pharaoh called for Moses and Aaron, and said, Entreat the LORD, that he may take away the frogs from me, and from my people; and I will let the people go, that they may do sacrifice to the LORD. And Moses said to Pharaoh, Glory over me: when shall I entreat for you, and for your servants, and for your people, to destroy the frogs from you and your houses, that they may remain in the river only?

And he said, To morrow. And he said, Be it according to your word: that you may know that there is none like to the LORD our God. And the frogs shall depart from you, and from your houses, and from your servants, and from your people; they shall remain in the river only. And Moses and Aaron went out from Pharaoh: and Moses cried to the LORD because of the frogs which he had brought against Pharaoh. And the LORD did according to the word of Moses; and the frogs died out of the houses, out of the villages, and out of the fields. And they gathered them together on heaps: and the land stank. But when Pharaoh saw that there was respite, he hardened his heart, and listened not to them; as the LORD had said.

Egyptian Pharaoh hardened his heart, trying every possible means to hinder the Israelites from leaving Egypt. However, God’s authority is supreme; He sent down ten plagues on Egypt and led the Israelites to cross the Red Sea safely by miracles, to enter the good land of Canaan in the end. It can be seen that no one can hinder the thing God wishes to accomplish.

Most people also read:  Christian Documentary “The One Who Holds Sovereignty Over Everything”: Testimony of the Power of God

Proper Fasting – Matthew 6 (Matthew 6:16-18) Moreover when you fast, be not, as the hypocrites, of a sad countenance: for they disfigure their faces, that they may appear to men to fast. Truly I say to you, They have their reward. But you, when you fast, anoint your head, and wash your face; That […]

The Plague on the Firstborn Foretold– Ten plagues of Egypt Exodus 11:1-10 And the LORD said to Moses, Yet will I bring one plague more on Pharaoh, and on Egypt; afterwards he will let you go hence: when he shall let you go, he shall surely thrust you out hence altogether. Speak now in the […]

The Lord of the Sabbath (Matthew 12:1-8) 1At that time Jesus went on the sabbath day through the corn; and his disciples were an hungered, and began to pluck the ears of corn and to eat. 2But when the Pharisees saw it, they said to him, Behold, your disciples do that which is not lawful to do on the sabbath […]