Hello everyone! I have a question. We all know that in the Age of Law, God worked to guide man through the spirit. If this was the case, why was God incarnated to do the work of redemption through crucifixion in the Age of Grace? What is the mystery here? I see that many of our brothers’ and sisters’ confusions have been resolved through this platform, so please communicate with me about my question.

Thank the Lord. There is truly a mystery to the Lord Jesus becoming flesh to do His work, but what we humans can apprehend is too limited. Recently, we learned a bit about this aspect of the truth from a book. Now, we’d like to explore this topic with you. Let’s discuss this question by exploring the following three points: 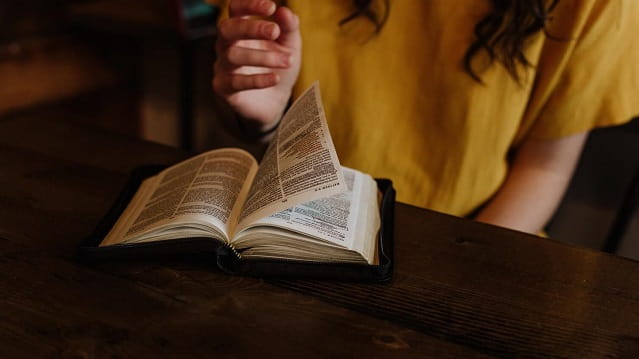 From Biblical records we know the following: By the end of the Age of Law, people had become increasingly corrupt and were unable to obey the law. Everyone was in constant danger of being convicted by the law and sentenced to death for breaking it. For the sake of mankind’s survival, during the Age of Grace, the first incarnation of God was nailed to the cross as a sin offering, taking on all of man’s sins. All we have to do is pray to God, confess and repent when we commit sins. If we do this, He will pardon our sins and thus, we can come before Him and receive His continued blessings and guidance. Such outcomes are only made possible by the work of God incarnate. God is the Spirit and it was not possible for the Spirit of God to be crucified. Only if God was incarnated as a man could He redeem man from sin through His crucifixion. This was the only way in which man could receive His salvation. From this, we can see that the Lord Jesus’ incarnation was entirely for the sake of redeeming mankind. Just as God’s words says, “By the same token, during the first incarnation, only the flesh of God incarnate could redeem man through His crucifixion, whereas there would have been no way for the Spirit of God to be crucified as a sin offering for man. God could directly become flesh to serve as a sin offering for man, but man could not directly ascend to heaven to take the sin offering that God had prepared for him. This being so, all that is possible would be to ask God to run back and forth a few times between heaven and earth, not to have man ascend to heaven to take this salvation, for man had fallen and, moreover, man simply could not ascend to heaven, much less obtain the sin offering. Therefore, it was necessary for Jesus to come among mankind and personally do the work that simply could not be accomplished by man.”

Second, the Lord Jesus was incarnated to do His work in order to allow man to better understand God’s will and to directly give us life nourishment.

Everyone who has read the Bible knows that, through His words, the incarnated Lord Jesus expressed His requirements for man using human language. For example, He used many metaphors so that His followers could understand His will more straightforwardly. God’s words say, “The best thing about His work in the flesh is that He can leave accurate words and exhortations, and His specific will for mankind to those who follow Him, so that afterward His followers can more accurately and more concretely pass on all of His work in the flesh, and His will for the whole of mankind, to those who accept this way. Only the work of God in the flesh among man truly accomplishes the fact of God’s being together and living together with man. Only this work fulfills man’s desire to behold the face of God, witness the work of God, and hear the personal word of God.” From God’s words, we can see that when God becomes flesh to save corrupt mankind, He can use the language of us humans to clearly express His demands, His will, His disposition and all that He has and is. In this way, without having to cast about and search, we can understand His will clearly, know His demands and know the way in which we ought to practice. We can also, as such, have a practical understanding and knowledge of Him. During the period the Lord Jesus worked in the flesh, He expressed the way in His words, “Repent: for the kingdom of heaven is at hand.” He had all sorts of demands for man, such as loving God with all one’s heart, with all one’s soul, with all one’s mind, and with all one’s strength, loving one’s neighbor as oneself, loving one’s enemies, and so on. The following anecdote was recorded in the Bible. When Peter’s brother sinned against him, he didn’t know how many times he should forgive his brother. So, he asked the Lord Jesus about it and the Lord gave him a clear answer (see Matthew 18:21–22). From this we can see that God’s incarnation can feed and support men whenever and wherever He goes, thereby directly and practically nourishing man. In contrast, the Spirit’s work cannot achieve the same effect. Therefore, the Spirit must become flesh so that God can speak to us face to face. This way, we can hear and understand God’s demands and properly behave in accordance to God’s liking.

Third, the purpose of Lord Jesus’ work was to expose mankind and distinguish each type of person.

God’s work is real. Only through the Lord Jesus’ incarnation as an ordinary man, could man’s corruption be fully exposed. This is the only way in which true believers, false believers and hypocritical Pharisees can be revealed.. When the Lord Jesus became flesh and came to do His work, those that sought the truth, like Peter, John, Matthew, and Nathanael, recognized that He was the promised Messiah. They recognized this when they saw that the Lord Jesus’ words and work were full of authority and power. As a result. they followed Jesus Christ and received His salvation. In contrast, the Jewish Pharisees, despite hearing the Lord Jesus’ sermons, still did not know that the Lord Jesus’ utterances were the voice of God. They thought that He was a carpenter’s son with no power or stature. Thus, brazenly condemned and resisted Him without the slightest fear. In the end, they committed the greatest of sins by nailing the Lord Jesus to the cross. The Lord Jesus once said, “My sheep hear my voice, and I know them, and they follow me” (John 10:27). From this, we see that anyone who sincerely believes in God and hungers for the truth, once hearing the voice of God, will come to the light and return before God. Whereas all those who are arrogant, who do not know God’s voice and who forsake God’s word, will be revealed and eliminated.

Mu Zhen: Thank God! Through your fellowship, I understand that the Lord Jesus’ doing His work in the flesh has a deep and profound meaning which cannot be replaced by the work of the Spirit. The Lord Jesus in the flesh could interact with man, talk to man and supply man with the truth and life in accordance with the practical difficulties and needs of the people. Thus, we can understand God’s demands clearly and act according to the words of the Lord Jesus in order to be of one mind with God. Meanwhile, when the Lord Jesus was incarnated to do His work, He exposed and eliminated all the false believers who ate loaves of bread and were filled by them and who resisted and condemned the work of His incarnation. This reveals God’s righteous disposition. All glory be to God!

Extended Reading:
God Is Almighty, but Why Did Jesus Redeem Us by Crucifixion

» Recommended for You: “The Mystery of Godliness: The Sequel” Clip: How to Understand God Incarnate

Incarnation of God
Previous What We Learn From Jesus Working on the Sabbath
Next Lord Jesus Treated 5,000 Men and His Disciples Differently

Pertaining to what is God incarnate, and what is the essence of God incarnate, it can be said as the mystery of the truth that we believers of the Lord fail to understand.
29:53

In the Age of Grace, God incarnated and became the Lord Jesus who came to redeem mankind, and the Jewish Pharisees said that the Lord Jesus was only a man.In the last days...
35:06

Gospel Movie Extract 2 From "The Mystery of Godliness: The Sequel": How to Understand God Incarnate

We believers in the Lord know the Lord Jesus is Christ, so why is the Lord Jesus called Christ? What is the meaning of Christ? Read this article to learn more.