Whenever reading these lines from Scripture: “How think you? if a man have an hundred sheep, and one of them be gone astray, does he not leave the ninety and nine, and goes into the mountains, and seeks that which is gone astray? And if so be that he find it, truly I say to you, he rejoices more of that sheep, than of the ninety and nine which went not astray. Even so it is not the will of your Father which is in heaven, that one of these little ones should perish” (Mat 18:12-14), I feel very moved in my heart, as God loves men so much that He won’t leave anyone as long as the sheep belongs to Him. But I had been wondering before why the Lord Jesus expressed His love for us human beings by parable and what the Lord’s will was? I didn’t understand the profound meaning within it until one day I saw the word of God on the gospel website.

God’s word says: “(Mat 18:12-14) How think you? if a man have an hundred sheep, and one of them be gone astray, does he not leave the ninety and nine, and goes into the mountains, and seeks that which is gone astray? And if so be that he find it, truly I say to you, he rejoices more of that sheep, than of the ninety and nine which went not astray. Even so it is not the will of your Father which is in heaven, that one of these little ones should perish.

“This is a metaphor—what kind of feeling do people get from this passage? The way this metaphor is expressed utilizes a figure of speech in human language; it’s something within the scope of human knowledge. If God had said something similar in the Age of Law, people would have felt that it wasn’t really consistent with who God was, but when the Son of man delivered this passage in the Age of Grace, it felt comforting, warm, and intimate to people. When God became flesh, when He appeared in the form of a man, He used a very appropriate metaphor to express the voice of His heart in humanity. This voice represented God’s own voice and the work He wanted to do in that age. It also represented an attitude that God had toward people in the Age of Grace. Looking from the perspective of God’s attitude toward people, He compared each person to a sheep. If a sheep is lost, He will do whatever it takes to find it. This represents a principle of God’s work among mankind this time in the flesh. God used this parable to describe His resolve and attitude in that work. This was the advantage of God becoming flesh: He could take advantage of mankind’s knowledge and use human language to speak to people, to express His will. He explained or ‘translated’ to man His profound, divine language that people struggled to understand in human language, in a human way. This helped people understand His will and know what He wanted to do. He could also have conversations with people from the human perspective, using human language, and communicate with people in a way they understood. He could even speak and work using human language and knowledge so that people could feel God’s kindness and closeness, so that they could see His heart.”

From the word of God, I understood that through the parable—“a man seeks the lost sheep,” the Lord Jesus used the feeling that we can understand to describe God’s eager desire to save people, so that we can experience God’s sincere feelings of expecting mankind to be able to return to the proper path after going astray. When a person strays far from God, God’s intention in wanting to find him is the same as the man’s intention in looking for the lost sheep; when this person is recovered and returns to God again, God feels the joy which is like that of the man finding his lost sheep. But the Lord Jesus’ word didn’t mean that He preferred this lost sheep to the ninety and nine that did not go astray, but expressed God’s love and expectation of mankind. God values us and hopes that we can turn to Him and come before Him to worship Him. So we can understand God’s love for mankind.

Apart from this kind of joy, God also made clear to us His resolve and attitude of saving people and never giving up until He gains people. The Lord Jesus also used this parable to let us understand His will toward the people He intends to save. When we are immature and get lost, God is worried about us by our side, and arranges all kinds of situations to awake us and causes us to no longer be harmed by Satan.

For instance: When I first started to believe in God, I was so tempted by social evil trends that I just worked hard to earn money, without regular gatherings. Just when I was about to be lost in the social trends and devoured by Satan, God arranged some situations to awake my heart. At that time, I often hit a wall when I did things. Besides, I also felt that I lived like that so miserably and tiredly, feeling empty inside. At last I thought of God, so I came before God once again, admitted my sins and repented to God. God gave me one more opportunity, which made me feel the warmth of His love. Now, I look back on it: If I had not hit a wall in the world and not experienced the pain of living for money, I wouldn’t have turned around; on the contrary, I would still keep on falling into the whirlpool of money from which I would be hard put to extricate myself, let alone have the chance to get God’s salvation. Meanwhile, I also saw that when I strayed away from God, God didn’t give up His salvation for me but arranged some situations to awake my heart so that I could experience God’s sincere heart that is man’s salvation, and His true and real love for us. Just as the word of God says: “Only the Creator has pity on this mankind. Only the Creator shows this mankind tenderness and affection. Only the Creator holds a true, unbreakable affection for this mankind. Likewise, only the Creator can bestow mercy on this mankind and cherish all of His creation.”

On the other hand, the Lord Jesus used the parable to let us understand that God working in the flesh is much easier for people to come into contact with than working in the Spirit. From the perspective of human, He can use human language and the parable as well as the most understandable words to express clearly God’s attitude toward mankind and His intention to us, closing the distance between Him and us, and making us feel that the God incarnate is lovable, amiable and venerable, and that we no longer feel fear just like the people who heard God’s Spirit speaking. Just as it was recorded in the Old Testament: Jehovah God appeared to Job by speaking in the tornado, to Moses in the flame, to the Israelites on Mount Sinai, and so on. It is clear that these words are the words of God’s spirit so that people are too afraid to get close to God. But when God becomes flesh and uses human language to speak to us, we will not have such feeling.

Through the parable of God’s seeking the lost sheep, I have much deeper understanding of God’s love and intention. Have you also realized God’s will to save us from this parable?

» Read more on our The Parables of Jesus page, or click on the related articles below:

• The Profound Meaning Behind the Parable of the Vineyard 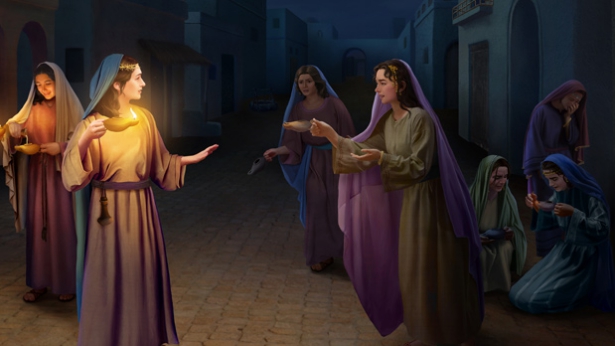 What Truly Are the Foolish Virgins?

How Did God Show His Love to Us Through the Lord Jesus’ Words?
Do you know the significance of the Lord Jesus’ parable in Matthew 18:12–14? How did God show His love through His words? As I read these words of the Lord and pondered the parable He spoke, I deeply appreciated God’s sincerity in saving us mankind.

What Is the Moral of the Parable of New Cloth on an Old Coat?
By Yaning One day, after a meeting, a sister asked me, “Brother, the Lord Jesus said, ‘No man puts a piece of a new garment on an old; if otherwise, …