Two thousand years ago, the Israelites desperately longed for the coming of the Messiah, but when the Lord Jesus, the Messiah, finally arrived, the Pharisees actually nailed Him to the cross, and as a result, the Israelites were subject to God’s punishment—the destruction of Israel. This bitter failure really calls for our reflection: How come the Pharisees who had believed in God for generations resisted God? Now it is already the last days, and the prophecies of the Lord’s return have basically been fulfilled. At this critical time of welcoming the Lord, how can we avoid following in the footsteps of the Pharisees?

As we all know, at the end of the Age of Law the Israelites, according to the prophecies in the Scripture, all longed for the Messiah to come and save them. At that time, the Pharisees, after hearing the prophecies about the coming Messiah, “For to us a child is born, to us a son is given: and the government shall be on his shoulder” (Isaiah 9:6), and “But you, Bethlehem Ephratah, though you be little among the thousands of Judah, yet out of you shall he come forth to me that is to be ruler in Israel; whose goings forth have been from of old, from everlasting” (Micah 5:2), began to fancy what He would be like based on the literal meaning of these prophecies. In their mind, the One who was to come must be called Messiah. Since He would come to rule, He must be someone who would be born into a royal palace with a heroic bearing and commanding presence, who would grow into a great warrior like David and lead His people to drive the Romans out of Israel, rescuing them from the oppression of the Romans. 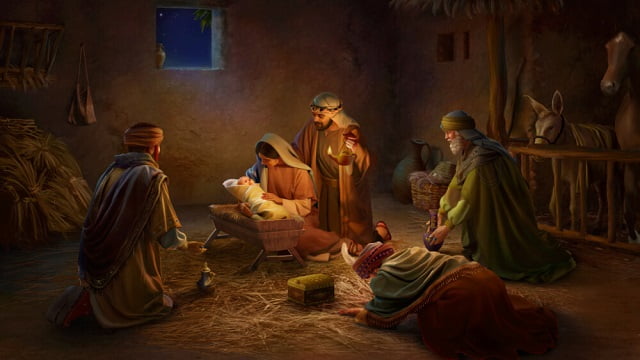 The birth of the Lord Jesus

However, the fulfillments of the prophecies were not as the Pharisees had imagined. When the Lord Jesus came, He was neither called the Messiah nor born into a royal palace. Instead, He was born in a manger and grew up in a poor carpenter’s home. His external appearance was not as majestic and extraordinary as they had fancied, but was very ordinary and normal. He didn’t lead the Israelites to overthrow the rule of the Romans, but walked among the people preaching the way of repentance, and taught them to practice forgiveness and tolerance and to love others as themselves. Seeing the Lord Jesus, who was ordinary and normal, not like the Messiah they imagined, the Pharisees stubbornly held on to their own notions and imaginings, concluding that He couldn’t be the coming Messiah, and seized upon every chance to condemn and resist Him. Even though the Lord Jesus performed many miracles and expressed many truths, from which many people recognized that He was Christ, the Pharisees didn’t have the slightest intention to seek. Regardless of how profound the Lord Jesus’ preaching was or how many miracles He performed, they obstinately rejected His work and even incited the people of Israel to resist and condemn Him. Later, they went so far as to collude with the Roman government to crucify the Lord Jesus—the Messiah who had come, committing a heinous sin and offending God’s righteous disposition, and ultimately were subject to God’s punishment—the destruction of Israel.

The failure of the Pharisees is really worthy of our self-reflection. They treated the prophecies about the Messiah based on their own conceptions and imaginations, which led to them becoming the ones who bitterly longed for the arrival of the Messiah but nailed Him to the cross. We all know that the prophecies in the Bible are about the things that God will accomplish in the future, which cannot be fathomed by us humans. So how should we treat them in a way that is after God’s heart? The Bible says, “We have also a more sure word of prophecy; whereunto you do well that you take heed, as to a light that shines in a dark place, until the day dawn, and the day star arise in your hearts: Knowing this first, that no prophecy of the scripture is of any private interpretation. For the prophecy came not in old time by the will of man: but holy men of God spoke as they were moved by the Holy Ghost” (2 Peter 1:19-21), and “Who also has made us able ministers of the new testament; not of the letter, but of the spirit: for the letter kills, but the spirit gives life” (2 Corinthians 3:6). These verses tell us that the prophecies are all from God, which cannot be commented on at will by us. We cannot interpret them literally, or rely on our own notions to speculate on them or determine their meaning, because they will only be fulfilled according to God’s own plan. God’s work is wondrous and full of His wisdom, which cannot be fathomed by us humans. If we define God’s work based on the literal meaning of the prophecies, we are liable to resist God and ultimately be destroyed by our own conceptions and imagination.

Compared to the Pharisees, there was a group of people who approached the prophecies of the Messiah in a different way. When seeing the Lord Jesus, who was ordinary and normal in appearance and not in accord with their fantasies about the Messiah, they didn’t hold on to their conceptions and imaginings but focused on listening to His words, and finally recognized through His words and work that He was the coming Messiah. Just like Simon Peter—he once said, “Lord, to whom shall we go? you have the words of eternal life” (John 6:68). Why could he say these words and recognize the Lord’s identity as Christ? This is because he found that what the Lord did was totally beyond what humans can do, that what He said contained the truth, and that He possessed the essence of God and “the words of eternal life.” The woman of Samaria is another example. When she first saw the Lord Jesus she thought He was no more than a common Jew. But when she heard Him say “For you have had five husbands; and he whom you now have is not your husband” (John 4:18), she concluded that He was the coming Messiah and believed in Him, for she knew that only God observes the deepest parts of man’s heart and knows man’s innermost secrets. There were also many people who, from the Lord’s acts of healing and exorcism, His working miracles and wonders, recognized that He was from God and thus followed Him. It can be seen that it was from the Lord’s work and words that all those who believed in and followed Him recognized that He was the Messiah.

This reminds me of a passage I once read, “Since we are searching for the footprints of God, it behooves us to search for God’s will, for the words of God, for His utterances—because wherever there are new words spoken by God, the voice of God is there, and wherever there are the footsteps of God, God’s deeds are there. Wherever there is the expression of God, there God appears, and wherever God appears, there the truth, the way, and the life exist. In seeking God’s footprints, you have ignored the words ‘God is the truth, the way, and the life.’ And so, many people, even when they receive the truth, do not believe that they have found God’s footprints, and still less do they acknowledge the appearance of God. What a grave mistake!” These words make it more clear that in seeking the true way, we should focus on seeking God’s words and work, for as long as a way has the expression of the truth and the utterances of God, then it is the true way.

Brothers and sisters, we all know that the Lord will come again in the last days, as it has long ago been prophesied in the Bible, “Behold, I stand at the door, and knock: if any man hear my voice, and open the door, I will come in to him, and will sup with him, and he with me” (Revelation 3:20), “I have yet many things to say to you, but you cannot bear them now. However, when he, the Spirit of truth, is come, he will guide you into all truth: for he shall not speak of himself; but whatever he shall hear, that shall he speak: and he will show you things to come” (John 16:12-13). And in the Book of Revelation, there are also several mentions that “He that has an ear, let him hear what the Spirit says to the churches” (See Revelation 2-3). From these prophecies, we can clearly see that when the Lord returns, He will speak and utter His words. God’s sheep are able to hear God’s voice. Those who can go out to welcome God once hearing His voice will be raptured before His throne. Now it is the last days. The prophecies about the Lord’s return have basically been fulfilled and many people are openly testifying online that the Lord Jesus has returned. In treating the matter of the Lord’s coming, we should learn from the failure of the Pharisees, let go of our notions and imaginings, and be the wise virgins by seeking and listening to God’s voice. This is the only way that we can welcome the Lord’s return.

Read more on our The Gospel of Jesus Christ  page, or in the recommended articles below:

How Should Christians Prepare for the Day of the Lord?
Read More

Knowing Meaning of God’s Work in His Incarnation From Parables

“How think you? if a man have an hundred sheep, and one of them be gone astray, does he not leave the ninety and nine, and goes into the mountains, and seeks that which is gone astray? And if so be that he find it, truly I say to you, he rejoices more of that […]