The Plague on the Firstborn Foretold– Ten plagues of Egypt 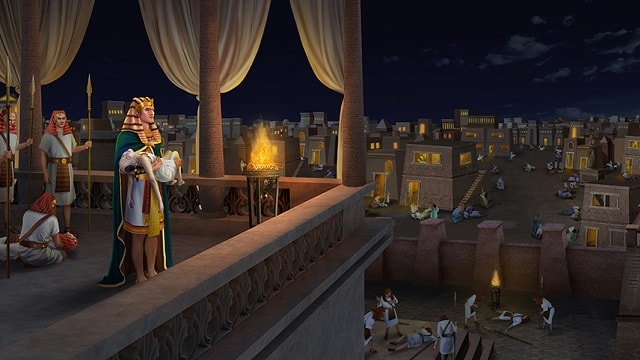 And Moses said, Thus said the LORD, About midnight will I go out into the middle of Egypt: And all the firstborn in the land of Egypt shall die, from the first born of Pharaoh that sits on his throne, even to the firstborn of the maidservant that is behind the mill; and all the firstborn of beasts. And there shall be a great cry throughout all the land of Egypt, such as there was none like it, nor shall be like it any more. But against any of the children of Israel shall not a dog move his tongue, against man or beast: that you may know how that the LORD does put a difference between the Egyptians and Israel. And all these your servants shall come down to me, and bow down themselves to me, saying, Get you out, and all the people that follow you: and after that I will go out. And he went out from Pharaoh in a great anger.

And the LORD said to Moses, Pharaoh shall not listen to you; that my wonders may be multiplied in the land of Egypt.  And Moses and Aaron did all these wonders before Pharaoh: and the LORD hardened Pharaoh’s heart, so that he would not let the children of Israel go out of his land.

Joshua 6 – The Walls of Jericho

The Walls of Jericho Joshua 6:1-21 Now Jericho was straightly shut up because of the children of Israel: none went out, and none came in. And the LORD said to Joshua, See, I have given into your hand Jericho, and the king thereof, and the mighty men of valor. And you shall compass the city, […]

The Fifth Plague: Livestock Exodus 9: 1-7 Then the LORD said to Moses, Go in to Pharaoh, and tell him, Thus said the LORD God of the Hebrews, Let my people go, that they may serve me. For if you refuse to let them go, and will hold them still, Behold, the hand of the […]