Manna and Quail from Heaven

Then said the LORD to Moses, Behold, I will rain bread from heaven for you; and the people shall go out and gather a certain rate every day, that I may prove them, whether they will walk in my law, or no. And it shall come to pass, that on the sixth day they shall prepare that which they bring in; and it shall be twice as much as they gather daily. And Moses and Aaron said to all the children of Israel, At even, then you shall know that the LORD has brought you out from the land of Egypt: And in the morning, then you shall see the glory of the LORD; for that he hears your murmurings against the LORD: and what are we, that you murmur against us?

And Moses said, This shall be, when the LORD shall give you in the evening flesh to eat, and in the morning bread to the full; for that the LORD hears your murmurings which you murmur against him: and what are we? your murmurings are not against us, but against the LORD. 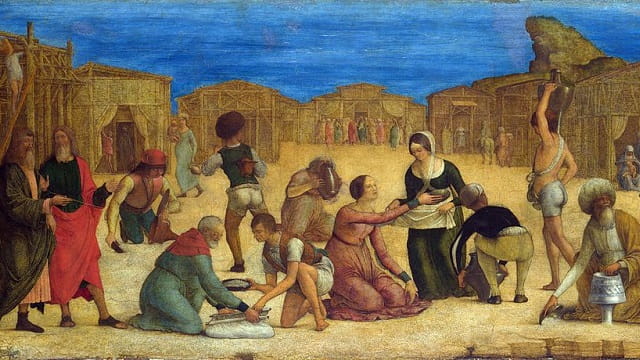 And it came to pass, that at even the quails came up, and covered the camp: and in the morning the dew lay round about the host. And when the dew that lay was gone up, behold, on the face of the wilderness there lay a small round thing, as small as the hoar frost on the ground. And when the children of Israel saw it, they said one to another, It is manna: for they knew not what it was. And Moses said to them, This is the bread which the LORD has given you to eat. This is the thing which the LORD has commanded, Gather of it every man according to his eating, an omer for every man, according to the number of your persons; take you every man for them which are in his tents. And the children of Israel did so, and gathered, some more, some less. And when they did mete it with an omer, he that gathered much had nothing over, and he that gathered little had no lack; they gathered every man according to his eating. And Moses said, Let no man leave of it till the morning.Notwithstanding they listened not to Moses; but some of them left of it until the morning, and it bred worms, and stank: and Moses was wroth with them. And they gathered it every morning, every man according to his eating: and when the sun waxed hot, it melted.

And it came to pass, that on the sixth day they gathered twice as much bread, two omers for one man: and all the rulers of the congregation came and told Moses. And he said to them, This is that which the LORD has said, To morrow is the rest of the holy sabbath to the LORD: bake that which you will bake to day, and seethe that you will seethe; and that which remains over lay up for you to be kept until the morning. And they laid it up till the morning, as Moses bade: and it did not stink, neither was there any worm therein. And Moses said, Eat that to day; for to day is a sabbath to the LORD: to day you shall not find it in the field. Six days you shall gather it; but on the seventh day, which is the sabbath, in it there shall be none.

And the house of Israel called the name thereof Manna: and it was like coriander seed, white; and the taste of it was like wafers made with honey. And Moses said, This is the thing which the LORD commands, Fill an omer of it to be kept for your generations; that they may see the bread with which I have fed you in the wilderness, when I brought you forth from the land of Egypt. And Moses said to Aaron, Take a pot, and put an omer full of manna therein, and lay it up before the LORD, to be kept for your generations. As the LORD commanded Moses, so Aaron laid it up before the Testimony, to be kept. And the children of Israel did eat manna forty years, until they came to a land inhabited; they did eat manna, until they came to the borders of the land of Canaan. Now an omer is the tenth part of an ephah.

The Faith of the Canaanite Woman – Bible Story

The Faith of the Canaanite Woman (Matthew 15:21-28) 21Then Jesus went there, and departed into the coasts of Tyre and Sidon. 22And, behold, a woman of Canaan came out of the same coasts, and cried to him, saying, Have mercy on me, O Lord, you son of David; my daughter is grievously vexed with a devil. 23But he answered […]

The Sixth Plague: Boils Exodus 9: 8-12 And the LORD said to Moses and to Aaron, Take to you handfuls of ashes of the furnace, and let Moses sprinkle it toward the heaven in the sight of Pharaoh. And it shall become small dust in all the land of Egypt, and shall be a boil […]

The Birth of Jesus (Matthew 1:18-25) Now the birth of Jesus Christ was on this wise: When as his mother Mary was espoused to Joseph, before they came together, she was found with child of the Holy Ghost. Then Joseph her husband, being a just man, and not willing to make her a public example, […]