The Incarnate God Is Full of Grace – Gospel Reflection on John 1:14 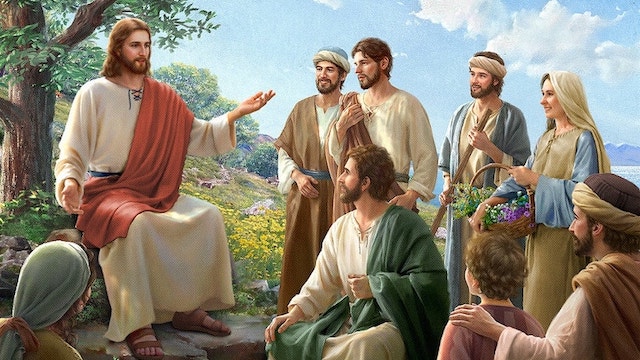 And the Word was made flesh, and dwelled among us, (and we beheld his glory, the glory as of the only begotten of the Father,) full of grace and truth. – John 1:14

During the Age of Law, Jehovah God proclaimed laws and commandments in order to guide man in his life on earth. If people were not able to abide by laws or commandments and sinned, they should offer cattle, sheep, or doves for their sins in the temple. In the late Age of Law, mankind’s corruption became ever more profound, and people lived in sin, often violated the laws and commandments, and did not have enough offerings to sacrifice to God. They faced the risk of being condemned and put to death because of their violations. In order to save mankind, during the Age of Grace God incarnated as the Lord Jesus on earth. He was nailed to the cross for the sake of mankind, and redeemed man from sin, enabling people to come before God and pray to God in the name of the Lord, confess and repent, be forgiven for their sins. There is no need for mankind to offer sacrifices in the temple. If God was not incarnated as the Lord Jesus to do the work of redemption, mankind will live in the bonds of the law and suffer. They cannot pray directly to God or draw near to God. Therefore, the work done by the Lord Jesus in His incarnation really brings us a lot of benefits. Not only does it bring us the sin offering and relieve us from the curses and condemnation of the law, but it also gives us bountiful grace and truth. We can fellowship with God face to face, enjoy the bountiful grace and truth which God bestows upon us and have gained true release and freedom. God’s incarnation is really so important for us, and is of great significance. Just as God says, “Though Jesus in His incarnation was utterly without emotion, He always comforted His disciples, provided for them, helped them, and sustained them. However much work He did or however much suffering He endured, He never made excessive demands of the people, but was always patient and forbearing of their sins, such that people in the Age of Grace affectionately called Him ‘the lovable Savior Jesus.’ To the people of that time—to all people—what Jesus had and was, was mercy and lovingkindness. He never remembered people’s transgressions, and His treatment of them was not based on their transgressions. Because that was a different age, He often bestowed plentiful food and drink upon the people so that they could eat their fill. He treated all His followers with grace, healing the sick, driving out demons, raising the dead. In order that the people might believe in Him and see that all that He did was done earnestly and sincerely, He went so far as to resurrect a rotting corpse, showing them that in His hands even the dead could come back to life. In this way He endured silently and did His work of redemption in their midst. Even before He was nailed to the cross, Jesus had already taken upon Himself the sins of humanity and become a sin offering for mankind. Even before being crucified, He had already opened the way to the cross in order to redeem mankind. At last He was nailed to the cross, sacrificing Himself for the sake of the cross, and He bestowed all of His mercy, lovingkindness, and holiness upon mankind.”

• What Is God's Greatest Grace for Man?

• Why Must God Incarnate Himself to Work and Save Man

He Who Humbles Himself Shall Be Exalted – Reflection on Luke 18:13–14

Today’s Gospel And the publican, standing afar off, would not lift up so much as his eyes to heaven, but smote on his breast, saying, God be merciful to me a sinner. I tell you, this man went down to his house justified rather than the other: for every one that exalts himself shall be […]

You Are the Light of the World – Reflection on Matthew 5:14

Faithful in the Little Things – Reflection on Luke 16:10