Keep God’s Word and God Will Be With Us – Gospel Reflection on John 14:23 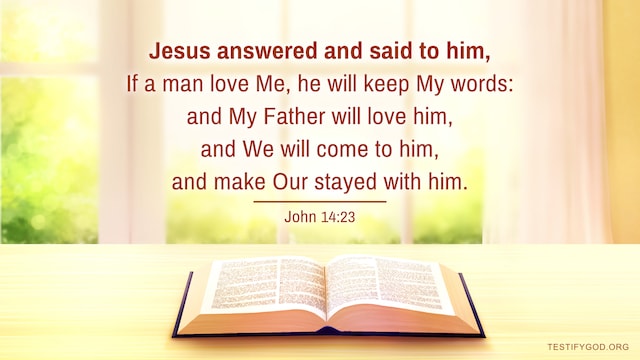 Jesus answered and said to him, If a man love Me, he will keep My words: and My Father will love him, and We will come to him, and make Our stayed with him. – John 14:23

Jesus Christ said those who love Him will keep His words, and that only those who follow God’s way can be brought by Him into His kingdom. Then what exactly is following God’s way? Many people think it means reading the scriptures and praying every day, or laboring and spreading Jesus Christ’s gospel. However, the Bible said, “Many will say to me in that day, Lord, Lord, have we not prophesied in your name? and in your name have cast out devils? and in your name done many wonderful works? And then will I profess to them, I never knew you: depart from me, you that work iniquity” (Matthew 7:22-23). Why did Jesus Christ say He never knew those who preached and worked wonders in His name? It can be seen that if we labor and preach in exchange for the blessings of the kingdom of heaven, it is not following God’s way. Then what is truly following God’s way?

Until one day, I read a passage, “In every age, God bestows some words upon man when He works in the world, telling man of some truths. These truths serve as the way to be adhered to by man, the way that is to be walked in by man, the way that enables man to fear God and shun evil, and the way that people should put into practice and adhere to in their lives and over the course of their life journeys. It’s for these reasons that God bestows these words on man. These words that come from God should be adhered to by man, and to adhere to them is to receive life. If a person does not adhere to them, does not put them into practice, and does not live out God’s words in their lives, then this person is not putting truth into practice. And if they’re not putting truth into practice, then they’re not fearing God and shunning evil, nor can they satisfy God. If someone can’t satisfy God, then they cannot receive God’s praise; this kind of person has no outcome.” This passage made me understand that following God’s way is to practice God’s current words and requirements. This is the most basic principle. Those who follow God’s way can obey and follow, practice according to His current requirements, accept His trust and bear witness to Him regardless of what He says or does. Those people, the ones that no longer rebel against God or resist Him, are the ones that He praises. Take Abraham, for example, he was able to follow God’s words. He dutifully gave his beloved only child to God. God rewarded Abraham for his loyal servitude. He blessed one of Abraham’s other children, allowing him to eventually become a great nation. Another example is Job; He revered God and stayed away from evil things. During his trials, when his wealth and children were stripped away, he cursed himself instead of blaming God; he continued to bless the holy name of Jehovah. Therefore, he was a perfect man in God’s eyes. Peter is yet another example. When he realized that Jesus Christ’s word and work have authority and are the way of life, he gave up everything and followed Jesus Christ all his life, longing to pursue the truth. After accepting Jesus Christ’s trust, he shepherded the church, in strict accordance with God’s requirements. Eventually he was able to serve God until death and love Him above everything else. All of these people obeyed and revered God. People like this are the ones who truly follow God’s way.

If you say that laboring for Jesus Christ means you are following God’s way, then why, after the Pharisees traveled to the ends of the earth to spread the gospel and work for Jesus Christ, were they eventually condemned and cursed by Jesus Christ? That’s because they believed in God but did not follow God’s way. When Jesus Christ came to do His works, not only did the Pharisees not accept it, they lead the entire Jewish faith in fanatically condemning and resisting Jesus Christ. They even bore false witness to Him in an attempt to hurt Jesus Christ. Everything they did was a betrayal of Jesus Christ’s path; they took Jesus Christ as their enemy. Although these people looked as if they were enduring much suffering and laboring hard for Jesus Christ, we cannot say they were following God’s way as long as they didn’t obey God’s current words and work. Therefore, if we want to follow God’s way, we should seek and accept God’s current words and work, accept His trust, practice His words. Only in this way can we have the opportunity to be commended by God and to be brought by Him into His kingdom.

• Can People Be Saved Into the Heavenly Kingdom Through Baptism?

• Does Working Hard Mean Following the Will of the Heavenly Father?

For there shall arise false Christs, and false prophets, and shall show great signs and wonders; so that, if it were possible, they shall deceive the very elect. Matthew 24:24 Jesus predicted that false Christs and false prophets would deceive people in the last days. The Lord Jesus also clearly prophesied many times that He […]

Today’s Gospel Jesus said to him, I am the way, the truth, and the life: no man comes to the Father, but by Me. We all know that the Lord Jesus is Christ in the flesh, that the essence of Christ is the truth, the way, and the life, and that only by following Christ, […]

My brothers, count it all joy when you fall into divers temptations; Knowing this, that the trying of your faith works patience. James 1:2-3 From this verse, we can know that God tests our faith through trials, so we should accept trials with joy. However, once trials come upon us, we oftentimes become negative, lose […]