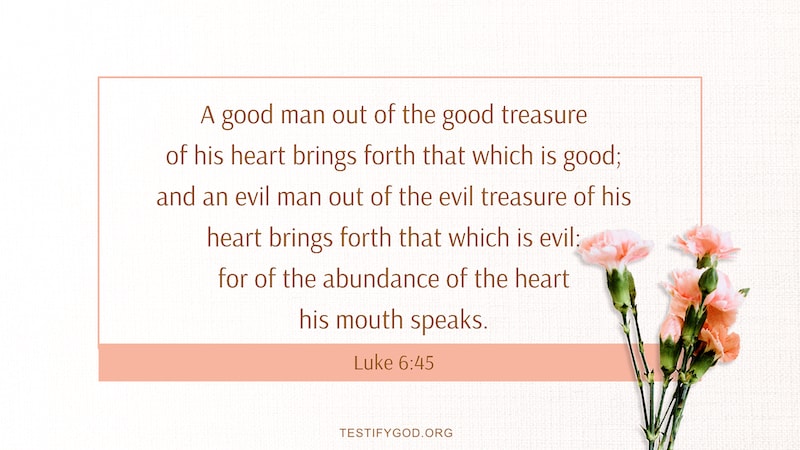 This verse points out some principles of discerning good from evil. We can discern whether a person is good or wicked from the intentions and motivations of his words and persistent performance because what he says and does is actually what he thinks. A good man has good will, conscience, and sense. If he who pursues the truth does something that goes against human morality or does something evil, he will feel guilty and accused, and people around him can see that he feels guilty and repentant. However, a wicked person only has evil thoughts in his mind. No matter how great evil a wicked person commits, they think that it’s a skill, an ability. They think it proves that their methods are superior, that they’ve achieved their goal, and that they’re better than others. That’s why they don’t have remorse, and worse still, don’t loathe themselves. They’re even pleased with themselves, think that they are more capable than others, and look down on others. Such people are wicked people. When they do evil, wicked people don’t have remorse or have a guilty conscience. They just like evil. They think that’s the way humans ought to be, that such behavior is normal. So people can’t see their repentance and changes. Just as God says, “People who genuinely believe in God are those who are willing to put God’s word into practice and are willing to practice the truth. People who are truly able to stand firm in their testimony to God are also those who are willing to put His word into practice and can genuinely stand on the side of the truth. People who resort to trickery and injustice all lack the truth, and they all bring shame to God. Those who cause disputes in the church are Satan’s lackeys, they are the embodiment of Satan. Such people are so malicious. Those who have no discernment and are incapable of standing on the side of the truth all harbor evil intentions and tarnish the truth. More than that, they are the archetypal representatives of Satan. They are beyond redemption, and shall naturally be eliminated.”

When we can distinguish between a good person and a wicked person, we should treat different people with corresponding principles. If good people who pursue truth commit a transgression or exhibit any corruption, we should assist them with love and must not suppress, exclude, or define them as hopeless ones, even though they have prejudices or make some judgment about us. As for wicked people, if we distinguish them, we must abandon them, draw a line between us and them, and not follow them in doing evil. As believers in God, what path we walk, what kind of people we follow, who we really obey, and whom we stand with—all of these are matters of principles. Only by entering the truth and learning how to discern all kinds of people can we shun evil.

• Christian Crosstalk "An Antichrist in the Church" – Be Careful! Don’t Be Deceived by Pharisees

The Lord Jesus is the Christ – Reflection on Matthew 16:16

Today’s Gospel And Simon Peter answered and said, You are the Christ, the Son of the living God. – Matthew 16:16 Reflection When Peter followed Jesus, he found Jesus’ words were the truth and His work was beyond the reach of man. In addition, he was enlightened by the Holy Spirit, so he could recognize […]

Prophecy in Revelation 6:1–8: Have the Four Horsemen of the Apocalypse Come?

Today’s Gospel And I saw when the Lamb opened one of the seals, and I heard, as it were the noise of thunder, one of the four beasts saying, Come and see. And I saw, and behold a white horse: and he that sat on him had a bow; and a crown was given to […]