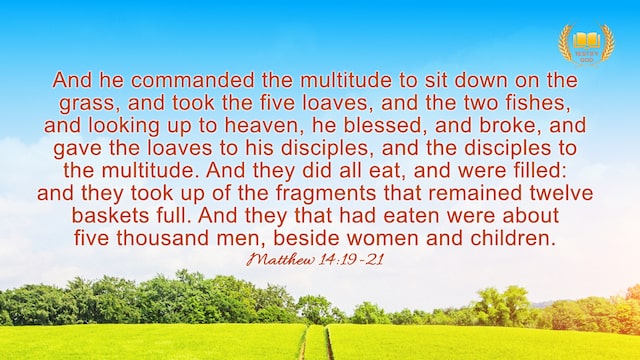 And he commanded the multitude to sit down on the grass, and took the five loaves, and the two fishes, and looking up to heaven, he blessed, and broke, and gave the loaves to his disciples, and the disciples to the multitude. And they did all eat, and were filled: and they took up of the fragments that remained twelve baskets full. And they that had eaten were about five thousand men, beside women and children.  – Matthew 14:19-21

From this verse, we can see that God is almighty and has authority and power and that nothing is impossible for God. When I read this verse, I thought: These 5,000 people are so blessed. They saw the Lord perform so great a miracle with their own eyes. They would surely follow the Lord Jesus and accept Him as their Savior. But as the Bible records, they did not regard the Lord Jesus as their Savior but judged Him because the Lord’s words were not in line with their notions. I wondered: Can it be that the Lord Jesus didn’t know these 5,000 people wouldn’t follow Him? So why did He perform such a great miracle before them and feed them? What exactly is His will? Later, I saw a passage of words in a spiritual book and understood God’s will behind this miracle. It says in the book: “First, let us try to understand what type of people these five thousand were. Were they followers of the Lord Jesus? From the Scripture, we know that they were not His followers. Did they know who the Lord Jesus was? Certainly not! At the very least, they did not know that the person standing in front of them was Christ, or maybe some people only knew what His name was and knew or had heard something about things He had done. Their curiosity about the Lord Jesus had merely been roused when they heard stories about Him, but you certainly could not say that they followed Him, much less understood Him.… but in God’s heart, all creatures are under His rule, and He would allow all creatures in His sight to enjoy the grace of God when it was necessary. Even though these people did not know who He was and did not understand Him or have any particular impression of Him or gratitude toward Him even after they had eaten the loaves and fish, this was not something that God took issue with—He gave these people a wonderful opportunity to enjoy the grace of God. Some people say that God is principled in what He does, that He does not watch over or protect nonbelievers, and that, in particular, He does not allow them to enjoy His grace. Is that actually the case? In God’s eyes, as long as they are living creatures that He Himself created, He will manage and care for them, and in manifold ways He will treat them, plan for them, and rule them. These are the thoughts and attitude of God toward all things.” I realized from this passage that how real and vast God’s love is for man! Those five thousand people were not the Lord’s disciples nor His followers. Many of them even didn’t know who the Lord Jesus was. However, in the heart of God, they were created by Him and under His sovereignty. Thus, instead of ignoring them, God gave them the chance to enjoy His grace, as well as took care of them and managed them. From this, we can see how profound and extensive the Creator’s love is for us! How can we not give thanks and praise to God?

Today’s Gospel For the Son of man is Lord even of the sabbath day. — Matthew 12:8 Reflection When I read Jesus’ these words, I only knew that observing the Sabbath was God’s requirement of man during the Old Testament age, but when Jesus came, He brought the Age of Grace and made new requirement […]

Train up a child – Reflection on Proverbs 22:6

Today's Gospel Train up a child in the way he should go: and when he is old, he will not depart from it. – Proverbs 22:6 Reflection Parents are children’s first teachers. Everywhere is competitive and full of temptations. If we don’t guide our children to choose the right direction in life, they will easily […]