No More Tears in Heaven – Reflection on Revelation 21:4 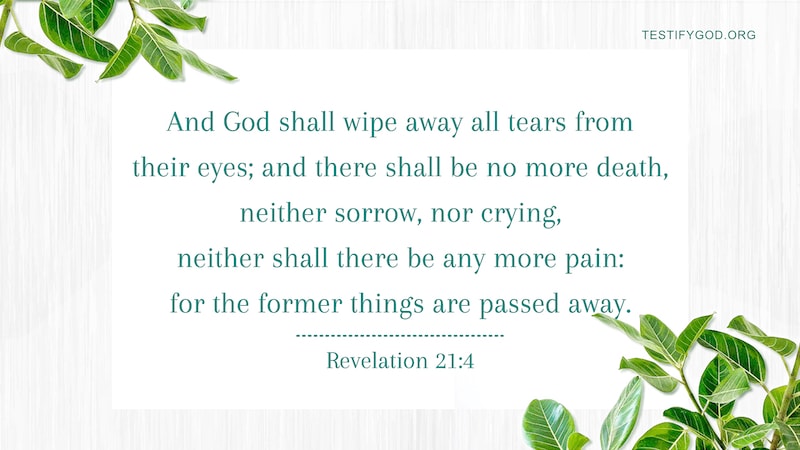 And God shall wipe away all tears from their eyes; and there shall be no more death, neither sorrow, nor crying, neither shall there be any more pain: for the former things are passed away. - Revelation 21:4

Each of us longs for a life without tears or sadness. Adam and Eve created by God in the beginning were placed inside the beautiful Garden of Eden. They did not experience birth, death, illness, and old age, nor did they have anxiety and distress. Moreover, they led happy life with God. Later, they didn’t listen to God’s words but ate the fruit of the tree of the knowledge of good and evil, so mankind started to have pain. But God has always wanted to save mankind. He not only issued the laws and guided the life of mankind, but personally became flesh to do the work of redemption by being crucified, so man’s sins were forgiven. Even so, we haven’t gotten rid of our corrupt dispositions and still live in the state of sinning during the day and confessing our sin at night. The Bible says, “Holiness, without which no man shall see the Lord.” From this verse, we can see that God is holy. If we still commit sins, we cannot be praised by God and enter into the Promised Land. Nevertheless, we know that God’s essence is love. Since God saves man, He will save him completely. It is recorded in the Book of Hebrews 9:28, “So Christ was once offered to bear the sins of many; and to them that look for him shall he appear the second time without sin to salvation.” The Lord Jesus was once offered to redeem mankind, and He promised that He would appear the second time to save us. If we accept His second salvation and are made clean, then we will be worthy of entering into God’s kingdom. At that time, we can enjoy a new life in the beautiful new heaven and earth without tears, death, sadness, crying, or pain.

Some words of God occurred to me, “Living in rest means a life without war, without filth, and without any persisting unrighteousness. This is to say, it is a life devoid of Satan’s disruptions (here ‘Satan’ refers to enemy forces) and Satan’s corruption, and nor is it prone to the invasion of any force in opposition to God; it is a life in which everything follows its own kind and can worship the Lord of creation, and in which heaven and earth are entirely tranquil—this is what is meant by the words ‘restful life of humans’” “As My words are consummated, the kingdom is gradually formed on earth and man is gradually returned to normality, and thus there is established on earth the kingdom in My heart. In the kingdom, all the people of God recover the life of normal man. Gone is the frosty winter, replaced by a world of cities of spring, where spring lasts all year. No longer are people faced with the gloomy, miserable world of man, and no longer do they endure the cold chill of the world of man. People do not fight with each other, countries do not go to war against each other, no longer is there carnage and the blood that flows from carnage; all lands are filled with happiness, and everywhere teems with warmth between men.” We can see that restful life is beautiful without wars or pains. In this kind of life, God will lead the people who are left to live on earth, and people will have regained the sanctity, live in God’s light, and enjoy a happy life of being with God. Thank God.

The Parable of the Lost Sheep – Reflection on Matthew 18:12

Today’s Gospel How think you? If a man have an hundred sheep, and one of them be gone astray, does he not leave the ninety and nine, and goes into the mountains, and seeks that which is gone astray? – Matthew 18:12 Reflection Why the Lord Jesus expressed His love for us human beings by […]

Have Your Prayer Heard by God – Reflection on Matthew 6:7

Matthew 6:7 "But when you pray, use not vain repetitions, as the heathen do: for they think that they shall be heard for their much speaking." Reflection Prayer is one of the ways in which every Christian get close to God, it is a means by which we obtain the work of the Holy Spirit. […]