The Ethiopian Eunuch Accepting the Gospel – Reflection on Act 8:26-38 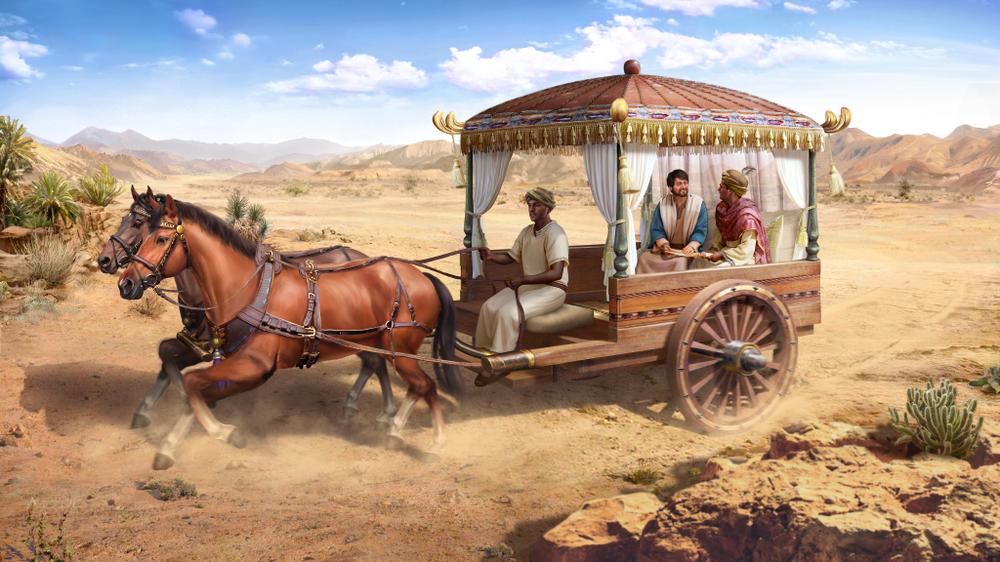 Seeing this picture, I can’t help but think of a record in the Bible, “And the angel of the Lord spoke to Philip, saying, Arise, and go toward the south to the way that goes down from Jerusalem to Gaza, which is desert. And he arose and went: and, behold, a man of Ethiopia, an eunuch of great authority under Candace queen of the Ethiopians, who had the charge of all her treasure, and had come to Jerusalem for to worship, Was returning, and sitting in his chariot read Esaias the prophet. Then the Spirit said to Philip, Go near, and join yourself to this chariot. And Philip ran thither to him, and heard him read the prophet Esaias, and said, Understand you what you read? And he said, How can I, except some man should guide me? And he desired Philip that he would come up and sit with him. The place of the scripture which he read was this, He was led as a sheep to the slaughter; and like a lamb dumb before his shearer, so opened he not his mouth: In his humiliation his judgment was taken away: and who shall declare his generation? for his life is taken from the earth. And the eunuch answered Philip, and said, I pray you, of whom speaks the prophet this? of himself, or of some other man? Then Philip opened his mouth, and began at the same scripture, and preached to him Jesus. And as they went on their way, they came to a certain water: and the eunuch said, See, here is water; what does hinder me to be baptized? And Philip said, If you believe with all your heart, you may. And he answered and said, I believe that Jesus Christ is the Son of God. And he commanded the chariot to stand still: and they went down both into the water, both Philip and the eunuch; and he baptized him” (Act 8:26-38).

These verses record the process of the Ethiopian eunuch accepting the gospel of the Lord Jesus. We all know that he was of high status and of honorable reputation at the time, and moreover, he was a religious Christian. While he was on the way home after performing his worship at Jerusalem, he met Philip. When Philip asked him whether he understood the verses he had read, he was not full of himself because of his own status or his Bible knowledge, nor was he self-conceited; instead, he let go of his status and position, seeking from Philip humbly. When Philip preached the work of the Lord Jesus to him, he didn’t hold on to his notions in resisting and condemning it. Rather, he, maintaining a heart of pure obedience, accepted the Lord Jesus’ work.

From this, we can see that regarding how to believe in God, the Ethiopian eunuch yearned for the truth, and in order to understand the truth, he was willing to humble himself. Ultimately, he gained the salvation of the Lord Jesus because he had an attitude that sought for the truth.

Think back to those Pharisees who followed the laws at that time. Even though they knew the Bible backward and forward, and had traveled over land and sea to spread the laws of Jehovah, nevertheless when it came to the new work done by the Lord Jesus, they intentionally closed themselves, stubbornly clung to their notions and imaginations and didn’t search for the truth at all. To protect their status and livelihood, they did their absolute utmost to oppose and condemn the work of the Lord Jesus. Eventually, they colluded with the Roman government to nail the Lord Jesus to the cross, which caused them to be cursed and punished by God. In this, we see that as man prepares for the coming of the Lord, different attitudes bring about different ends.

Now the last days have arrived. The Lord Jesus has promised that He will come again. Besides, it is prophesied in Revelation, “And I saw another angel fly in the middle of heaven, having the everlasting gospel to preach to them that dwell on the earth, and to every nation, and kindred, and tongue, and people” (Rev 14:6). This shows us that when the Lord comes again, the everlasting gospel will be preached to people on earth. Therefore, we must be awake and waiting. If someone spreads and testifies to the work and words of the Lord Jesus at His return, we should emulate the Ethiopian eunuch and be the ones who seek the truth humbly. Only in this way can we obtain the salvation of the last days and feast with the Lord. Just as the Bible prophesies, “Behold, I stand at the door, and knock: if any man hear my voice, and open the door, I will come in to him, and will sup with him, and he with me” (Rev 3:20). “Blessed are they which do hunger and thirst after righteousness: for they shall be filled” (Mat 5:6). “Blessed are the poor in spirit: for theirs is the kingdom of heaven” (Mat 5:3). No matter how high or low our status is, or how long we have believed in God, as long as we let go of our religious conceptions and are willing to seek the truth humbly, we can receive God’s enlightenment and leading, follow His footsteps and gain His salvation in the last days.

» Read more on our Bible Study Topics page, or click on the related articles below:

• What Are the Lord’s Intentions Behind the Parable of the Shepherd Seeking the Lost Sheep?

Blessed Are the Peacemakers—Reflection on Matthew 5:9

Matthew 5:9 "Blessed are the peacemakers: for they shall be called the children of God." Reflection This is the Lord Jesus’ teaching to us Christians. We should be peacemakers. In the Bible Abram and Lot went up out of Egypt into the south. There was a strife for land between Abram’s herdsmen and Lot’s herdsmen. […]

Matthew 6:26 "Behold the fowls of the air: for they sow not, neither do they reap, nor gather into barns; yet your heavenly Father feeds them. Are you not much better than they?" Reflection From this verse, Jesus tells us not to worry about the future. We are created by God. In order to make […]

Jesus Warned Them Not to Tell Anyone – Reflection on Matthew 9:30

Matthew 9:30 "And their eyes were opened; and Jesus straightly charged them, saying, See that no man know it." Reflection Why the Lord warned man not to tell anyone after performing miracles? As is known to us, the wisdom of God surpasses man’s imagination. Every stage of God’s work is done by the result to […]

Today’s Gospel But he answered and said, It is written, Man shall not live by bread alone, but by every word that proceeds out of the mouth of God. - Matthew 4:4 Reflection This verse should be many Christians’ motto. God’s word is the truth and the daily bread of our life. Because of God’s […]