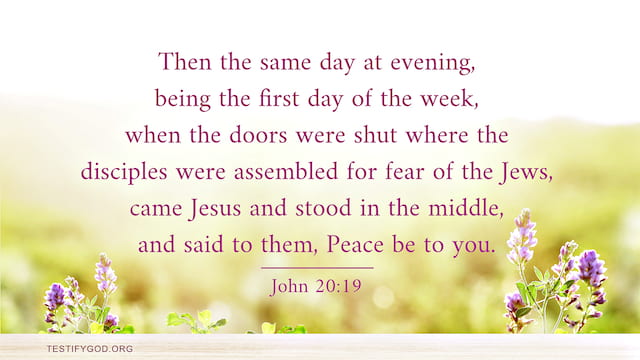 Then the same day at evening, being the first day of the week, when the doors were shut where the disciples were assembled for fear of the Jews, came Jesus and stood in the middle, and said to them, Peace be to you.

Whenever I read this verse, I cannot help but ponder: Though it happened thousand years ago, what was the significance of Jesus’ resurrection? Why did He appear to people after His resurrection? From a spiritual book, I have read one passage: “And when He walked out from the grave, and appeared to the people one by one, the majority of people who had seen Him with their own eyes or heard the news of His resurrection gradually shifted from denial to skepticism. By the time the Lord Jesus had Thomas put his hand into His side, by the time the Lord Jesus broke bread and ate it in front of the crowd after His resurrection, and after that ate broiled fish in front of them, only then did they truly accept the fact that the Lord Jesus is Christ in the flesh. … This brief reunion made the people who saw the Lord Jesus feel as if a lifetime had passed. Their lost, confused, afraid, anxious, yearning and numb hearts found comfort. They were no longer doubtful or disappointed because they felt that now there was hope and something to rely on. The Son of man standing in front of them would be behind them for eternity, He would be their strong tower, their refuge for all time.” God examines the innermost heart of man. Jesus knew that His disciples followed Him, but they didn’t believe that He was the incarnate God, much less the fact of His resurrection. Thomas was the classical example. After he touched Jesus’ wound in His rib and nail marks in His hands, Thomas’ doubt of God disappeared. Hence, Jesus’ appearance to people was to make those who followed Him truly believe that He is the incarnate God and is the Lord who created the heavens and earth and all things. Although He was nailed to the cross, He had the power of resurrection. From these, we can see God’s authority, strengthen our faith, and truly rely on Him on our path of following God.

Read more in these articles: 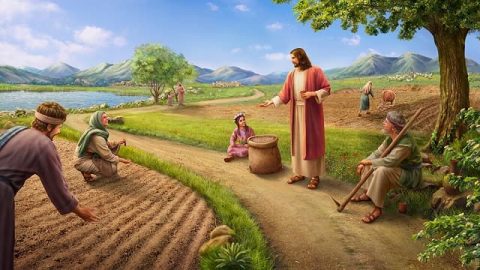 Today’s Gospel And he commanded the multitude to sit down on the grass, and took the five loaves, and the two fishes, and looking up to heaven, he blessed, and broke, and gave the loaves to his disciples, and the disciples to the multitude. And they did all eat, and were filled: and they took […]

Whoever Seeks God Will Surely Gain Life – Reflection on Proverbs 8:35

Today’s Gospel For whoever finds me finds life, and shall obtain favor of the LORD. - Proverbs 8:35 Reflection We understand that God is the truth, the way, and the life. You have searched for God, of course you find the source of man’s life. God’s words say, “Perhaps, now, you wish to receive life, […]

A Tree Is Known By Its Fruit – Reflection on Matthew 12:33