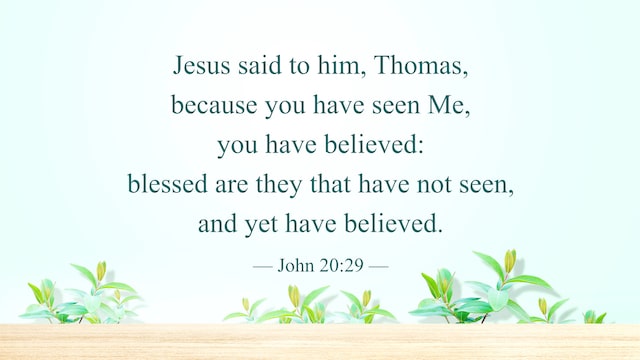 Jesus said to him, Thomas, because you have seen me, you have believed: blessed are they that have not seen, and yet have believed. – John 20:29

In the past, when I saw this verse, I only thought these were the Lord’s words to Thomas. But several days ago, I saw a passage on the Internet, which made me realize that Thomas represents a type of person and that the words spoken by the Lord are also a caution and a warning for us. I’d like to share this passage with you: “Thomas represents a type of person who believes in God yet doubts God. They are of a suspicious nature, have sinister hearts, are treacherous, and do not believe in the things that God can accomplish. They do not believe in God’s omnipotence and His sovereignty, and neither do they believe in God incarnate. However, the Lord Jesus’ resurrection flew in the face of these traits that they have, and it also provided them with an opportunity to discover their own doubt, to recognize their own doubt, and to acknowledge their own treachery, thus coming to truly believe in the existence and resurrection of the Lord Jesus. What happened with Thomas was a warning and a caution for later generations so that more people could warn themselves not to be doubters like Thomas, and that if they did fill themselves with doubt, then they would sink into the darkness. If you follow God, but just like Thomas, always want to touch the Lord’s rib and feel His nail marks to confirm, to verify, to speculate on whether or not God exists, then God will forsake you. So, the Lord Jesus requires people to not be like Thomas, only believing what they can see with their own eyes, but to be pure, honest people, to not harbor doubts toward God, but to simply believe in and follow Him. People like this are blessed. This is a very small requirement the Lord Jesus makes of people, and it is a warning for His followers.”

After reading these words, I understand the reason for the failure of people like Thomas. It is because their hearts are too deceitful and they always assess the authenticity and reason of things with their own eyes, clinging to the view “seeing is believing,” and do not have the eagerness to seek the truth. Thus, this kind of people finally are ruined by their deceitfulness. Now we all yearn for the second coming of Jesus, but many of us believe that the Lord Jesus who does not ride upon a white cloud is a false Christ. No matter who testifies that the Lord has returned, they do not believe but cling to their own notions and only believe when they see the Lord come openly on clouds with their own eyes. Don’t they have the same viewpoint as Thomas? When we hear someone preaches the Lord has come, if we don’t put aside our imaginations and notions, but follow the masses, waiting and seeing, and fear to seek and investigate the true way, we are surely unable to see the Lord’s appearance, and thus we’ll lose the opportunity to gain salvation and enter the kingdom of heaven. The Lord said, “Because you have seen Me, you have believed: blessed are they that have not seen, and yet have believed.” These words are just the Lord’s reminders for us in the last days to not follow in the footsteps of those who had failed.

» Read more on our Commentaries on Proverbs page, or click on the related articles below:

• Jesus Appeared to Thomas: What Is the Significance

Leave Parents and Join to Your Spouse – Reflection on Matthew 19:5

Today’s Gospel And said, For this cause shall a man leave father and mother, and shall join to his wife: and they two shall be one flesh? – Matthew 19:5 Reflection Marriage is a key event in the life of every one of us. We harbor many illusions about marriage before we experience it ourselves. […]

Today’s Gospel Jesus answered and said to him, Truly, truly, I say to you, Except a man be born again, he cannot see the kingdom of God. - John 3:3 Reflection In this verse, the Lord Jesus told us that we must be born again if we want to enter the kingdom of heaven. Then […]

Blessed Are the Peacemakers—Reflection on Matthew 5:9

Matthew 5:9 "Blessed are the peacemakers: for they shall be called the children of God." Reflection This is the Lord Jesus’ teaching to us Christians. We should be peacemakers. In the Bible Abram and Lot went up out of Egypt into the south. There was a strife for land between Abram’s herdsmen and Lot’s herdsmen. […]