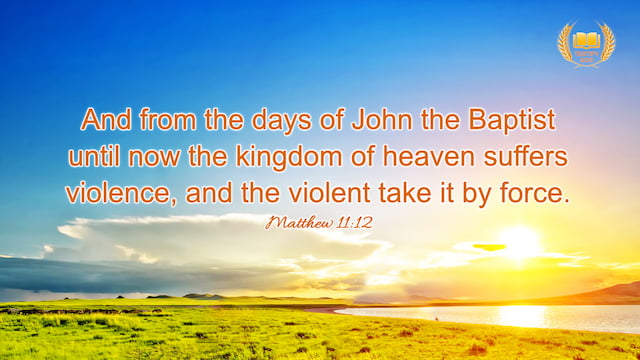 And from the days of John the Baptist until now the kingdom of heaven suffers violence, and the violent take it by force. - Matthew 11:12

From this verse, we can know the requirement for entering the kingdom of heaven that the Lord Jesus pointed out for us: Only by practicing God’s words and doing God’s will can we enter the kingdom of heaven. As Christians, our greatest wish is to be raptured into the kingdom of heaven. So, how can we obtain the right to enter the heavenly kingdom? What direction should we do it in? The Lord Jesus said, “Not every one that said to Me, Lord, Lord, shall enter into the kingdom of heaven; but he that does the will of My Father which is in heaven” (Matthew 7:21). And the Bible also records, “Follow peace with all men, and holiness, without which no man shall see the Lord” (Hebrews 12:14). Obviously, only when we do God’s will, follow His way, break free from sin and are purified, can we enter the kingdom of heaven. However, many people don’t focus on following the way of the Lord or practicing His words; instead, they think as long as they work hard for the Lord, make sacrifices, expend themselves, and spread the gospel more, they can enter the kingdom of heaven. This reminds me of the Pharisees who single-mindedly pursued working hard for the Lord and traveled far and wide to preach the gospel. They thought that as long as they did in this way, they could be praised by the Lord and enter the kingdom of heaven. This is the direction they worked toward. But in the end, all of their actions were condemned as hypocritical because they wanted to enter the holy kingdom of God through external toil instead of practicing the Lord’s words. Let us take a look at the Lord Jesus’ disciple Peter. In his pursuit of the Lord Jesus, he focused on practicing according to the Lord’s requirements in everything, and pursued loving God and satisfying God, and finally he achieved an ultimate love of God, obeyed God unto death, was crucified upside down for God, and became a person after God’s heart. People like him will live in the heavenly kingdom. If we compare the directions the Pharisees and Peter worked toward, it’s easy to see that if people who believe in God and follow Him want to enter God’s kingdom, only by practicing the Lord’s words, following His way, and becoming people who do God’s will, can they realize this wish. This is the only condition for entering the kingdom of heaven. Just as God says, “You must know what kind of people I desire; those who are impure are not permitted to enter into the kingdom, those who are impure are not permitted to besmirch the holy ground. Though you may have done much work, and have worked for many years, in the end if you are still deplorably filthy—it is intolerable to the law of Heaven that you wish to enter My kingdom! From the foundation of the world until today, never have I offered easy access to My kingdom to those who curry favor with Me. This is a heavenly rule, and no one can break it!” From God’s words, we can see that God is righteous and holy, and God’s kingdom is holy, so how can those who are impure be permitted to enter into the kingdom? Meanwhile, we can see God’s will is to bring those who are saved by God, changed and made clean into His kingdom. Having known God’s will, we should pursue doing God’s will, following God’s way, and being cleansed and perfected, thus achieving an ultimate love of God and obeying God unto death like Peter. Only in this way can we be people after God’s heart, and have a place in the heavenly kingdom.

• Sermon: What and Where Is the Kingdom of God?

• Do You Know the Requirements to Enter the Kingdom of God?

• Grasping the 4 Key Elements, You Will Serve God’s Will

» Most people also watch Church Skits: “Wishful Thinking”: Can We Enter the Kingdom of Heaven by Following Paul?

Today’s Gospel Jesus said to him, Thomas, because you have seen me, you have believed: blessed are they that have not seen, and yet have believed. – John 20:29 Reflection In the past, when I saw this verse, I only thought these were the Lord’s words to Thomas. But several days ago, I saw a […]

Worship God With Heart and With Honesty – Gospel Reflection on John 4:24

Those Who Love God Live a More Meaningful Life – Reflection on Matthew 22:37