With God All Things Are Possible – Reflection on Matthew 19:26

But Jesus beheld them, and said to them, With men this is impossible; but with God all things are possible. – Matthew 19:26 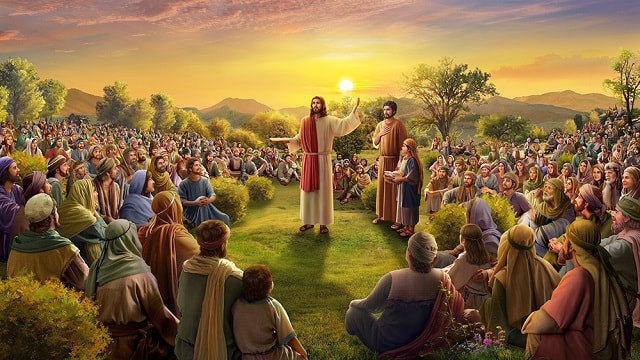 When God blessed Abraham, He allowed us to see that God’s word is with authority and the only One who truly exerts authority is God Himself. God said, “As for me, behold, my covenant is with you, and you shall be a father of many nations. Neither shall your name any more be called Abram, but your name shall be Abraham; for a father of many nations have I made you. And I will make you exceeding fruitful, and I will make nations of you, and kings shall come out of you” (Gen 17:4-6). God promised Abraham that his wife would bear a son. Though his wife was past childbearing age, she bore Isaac the next year. From this fact, we can see God’s faithfulness and His power, and truly experience that God is capable of doing that which man cannot. God’s words say, “If someone says they hope another person will be exceeding fruitful, that nations will be made from them, and that kings shall come from them, then that is undoubtedly a kind of wish, and is not a promise or a blessing. And so, people dare not say ‘I will make you such and such, you shall such and such,’ for they know that they do not possess such power; it is not up to them, and even if they say such things, their words would be empty, and nonsense, driven by their desire and ambition. Does anyone dare to speak in such a grand tone if they feel that they cannot accomplish their wishes? Everyone wishes well for their descendants, and hopes that they will excel and enjoy great success. What great fortune it would be for one of them to become emperor! If one were to be a governor that would be good, too—just as long as they’re someone important! These are all people’s wishes, but people can only wish blessings upon their descendants, and cannot fulfill or make any of their promises come true. In their hearts, everyone clearly knows that they do not possess the power to achieve such things, for their everything is beyond their control, and so how could they command the fate of others? Whereas the reason why God can say words like these is because God possesses such authority, and is capable of accomplishing and realizing all the promises that He makes to man, and of making all the blessings that He bestows upon man come true. Man was created by God, and for God to make someone exceedingly fruitful would be child’s play; to make someone’s descendants prosperous would require but a word from Him. He would never have to work Himself into a sweat for such a thing, or task His mind, or tie Himself in knots over it; this is the very power of God, the very authority of God.” From God’s word, we understand humans are created by God and He rules over and controls mankind. Among creatures, the power of man can never be compared with God’s authority. Also, we should obey God’s sovereignty and arrangements. If we make it, we will gain true happiness and peace.

» Read more on our God's Authority page, or click on the related articles below:

• God Promises to Give Abraham a Son

» Most people also watch Christian Movie:"The One Who Holds Sovereignty Over Everything" (Christian Musical Documentary)

Today’s Gospel Then the same day at evening, being the first day of the week, when the doors were shut where the disciples were assembled for fear of the Jews, came Jesus and stood in the middle, and said to them, Peace be to you. Reflection Whenever I read this verse, I cannot help but […]

A Good Spouse Is the Lord’s Blessing – Reflection on Proverbs 18:22

Today’s Gospel Whoever finds a wife finds a good thing, and obtains favor of the LORD. - Proverbs 18:22 Reflection This verse shows us that whoever finds a good wife or husband obtains God’s grace and blessing. Every person wants such a happy marriage. But whether or not we can obtain is not a matter […]

He That Does Truth Comes to the Light – Gospel Reflection on John 3:21

Today’s Gospel But he that does truth comes to the light, that his deeds may be made manifest, that they are worked in God. - John 3:21 Reflection What’s the truth? God says, “The truth is the most real of life’s aphorisms, and the highest of such aphorisms among all mankind. Because it is the […]